The Hammer of Sauron
The Hammer

Bullying and berating his Uruk minions as well as anyone else.

Killing his Uruk minions whenever they displease or irritate him (which is often).
Helping the wounded (formerly).

The Hammer of Sauron is one of the secondary antagonists in the 2014 Lord of the Rings videogame Middle-Earth: Shadow of Mordor. He was once a stretcher-bearer for the Numenorean army during the Battle of the Last Alliance. However, after discovering Sauron's discarded mace, the stretcher-bearer took it for himself, and from there became one of Sauron's most dangerous and loyal servants.

He was once a stretcher bearer during the War of the Last Alliance, but he became disillusioned, and came across the mace of the Dark Lord Sauron. He was seduced by its power, and decided to give soldiers the glory that they wanted on the battlefield instead of helping those who were wounded.

After coming to throw in with Sauron, the Hammer became one of his three Dark Captains alongside the Black Hand and the Tower. Each of them represented a different aspect of their master's character, and in the case of the Hammer, he represented Sauron's martial prowess and warrior's ferocity and strength.

He was present when his leader the Black Hand murdered Talion in a ritual that bonded him to the Elven wraith Celebrimbor. This ritual also saw the violent killings of Talion's wife and son, an act that embittered him towards the Black Captains. Talion would get his revenge on all of them, and the Hammer would be the first to be targeted. Talion confronted him after wrecking havoc on Sauron's Uruk forces throughout Mordor.

Though a frustrated Hammer struck down Talion's Orc ally Ratbag for his incompetence in preventing Talion's actions, and taunted Talion regarding the deaths of his family, he was ultimately unable to defeat Talion in a duel, falling to Talion's blade and being the first of the Black Captains to die. Talion would succeeded in his goal to kill The Tower and The Black Hand, and would attempt to defeat Sauron by crafting a new ring. 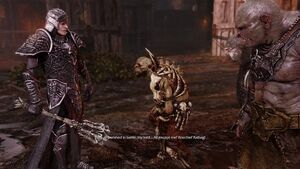 The Hammer confronts Ratbag the Coward. 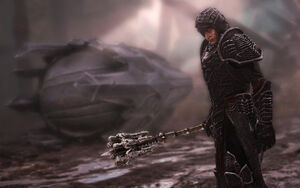 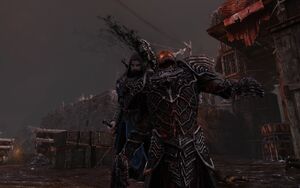 The Hammer's death.
Add a photo to this gallery

Retrieved from "https://villains.fandom.com/wiki/Hammer_of_Sauron?oldid=3465441"
Community content is available under CC-BY-SA unless otherwise noted.