Making deals and supervising with supervillains.

Hammerhead is one of the secondary antagonists, alongside Doctor Octopus and Tombstone, of the animated TV series The Spectacular Spider-Man.

He was a thug who formerly worked for Silvermane before working for Tombstone. He was Tombstone's right-hand in making deals and supervising with supervillains until he was manipulated to betray his boss.

He was voiced by John DiMaggio, who also played Sandman in the same series, Dr. Drakken in Kim Possible, Brother Blood in Teen Titans, and the Joker in Batman: Under the Red Hood.

Hammerhead was shown to be brutish and menacing in appearance and was very loyal to Tombstone before betraying him. He also dated Silver Sable before they became enemies.

Hammerhead is a thug who formerly worked for Silvermane and dated Silver Sable before he became Tombstone's right-hand when the former became the new Big Man of Crime.

In Season 1, Hammerhead acted as Tombstone's go-between in criminal and business transactions with Norman Osborn. Hammerhead hired the Enforcers to go after Spider-Man, and aided in the creations of other supervillains such as Shocker, Sandman, and Rhino. He was then later abducted by the Green Goblin who tried to bait Tombstone and Spider-Man into a trap. Tombstone managed to rescue Hammerhead before they escaped while Spider-Man fought the Green Goblin. He then later helped the Sinister Six and Enforcers by giving their suits and equipment back while the rest of the Enforcers escaped with him.

In Season 2, Hammerhead later appeared during the gang war, bidding in a secret auction against rival criminals Silver Sable, Roderick Kingsley, and Doctor Octopus. Kingsley won, taking the prize: specs to mass-produce an army of Rhino-like villains. He was later attacked by Silver Sable and Hammerhead, who fought each other, and Spider-Man, over the specs. It was revealed that Hammerhead and Sable had once dated, and now had only animosity for each other. When the original Rhino came and destroyed the specs on orders of Doc Ock, the fight ended, and Hammerhead escaped. However, this is revealed to have been a decoy by Norman Osborn who had the real specs.

It is unknown what happens to him seeing as that he never appears again in the series and there is a chance he may have been killed, either by the Green Goblin or Tombstone. 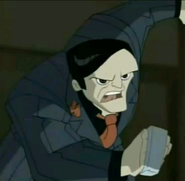