Hammerhead Hannigan is the secondary antagonist of the Darkwing Duck pilot episodes "Darkly Dawns the Duck".  He is right-hand goat henchman of Taurus Bulba and one of Darkwing Duck's first enemies.

He was voiced by Hal Rayle in "Darkly Dawns the Duck", and Tad Stones in "In Like Blunt".

Hammerhead and his two bumbling subordinates named Hoof and Mouth carried out Bulba's orders while he was in prison, but were often incompetent in doing so. He personally went to kidnap Gosalyn from the Orphanage, claiming to be an old friend, but was stopped by Darkwing Duck.

He used his long horns to charge at opponents but could also use them to pry open doors and latches like the other side of a hammer's head.

Hammerhead later appeared in the episode "In Like Blunt", where he went to a black-market auction run by Phineas Sharp. 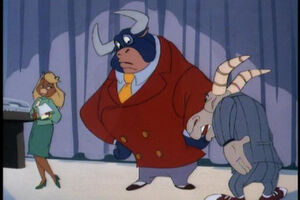 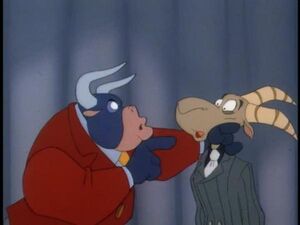 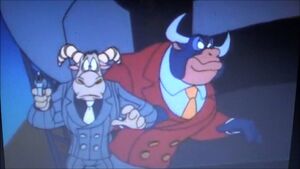 Hammerhead in a final showdown.