Sell drugs from his island.

Host a martial arts torment to recruit new members for his operation.

Han is the main antagonist from the 1973 Bruce Lee martial arts action film Enter the Dragon.

Han is a heroin drug lord who runs his heroin cooking business from a secluded island. He also lost a hand, though how he lost it is never explained. He keeps the bones of the severed hand on display in a museum of torture and weapons. In place of the missing hand he has a variety of weapon hands to use like an iron hand, claw hand and a bladed hand. He is also an expert in martial arts.

He was portrayed by the late Shih Kien.

The movie starts with a British Intelligence agent who approaches a man named Lee, a Shaolin martial artist from Hong Kong and asks for his help. They cannot arrest Han since Han's island is only partly in their jurisdiction, they are unable to conduct any formal investigations. Han runs a martial arts school to protect his drug operations, as well as holding his tournament every three years to recruit international talent to expand his criminal business. Lee agrees to help.

Lee arrives on Han's island, joining him and other competitors including Roper and Williams. After nightfall Lee begins searching the island for evidence and finds a underground base, where drugs are being manufactured and tested on unwitting prisoners, he puts down several guards and returns to his room. The next day, Han punishes the guards for failure in their duties by leaving them to the hands of the sadistic Bolo, Han's chief bodyguard.

Later, Han summons Williams and accuses him of attacking the guards the previous night. Williams denies this, Han summons his henchmen; Williams takes them out so Han himself beats Williams to death with his cast iron hand.

The next day, Han takes Roper on a tour of his underground base and invites him to be his representative for his heroin smuggling operations in the United States. Roper is reluctant, but Han shows him the mutilated corpse of Williams, hinting that Roper will face the same fate if he refuses to co-operate. The same night, Lee breaks into the underground base and after fighting with dozens of Han's guards, he is eventually lured into a trap and captured.

The next morning, Han asks Roper to fight Lee as a test of his loyalty. Roper refuses, so Han has him fight Bolo instead, but Roper defeats him. The infuriated Han then orders all his men to kill both Lee and Roper. Despite being hopelessly outnumbered, Lee and Roper manage to hold off the enemy until the captives in Han's underground prison, join them in the fight and even the odds. Amidst the chaos, Han attempts to fight his way out, only to have Lee chase him to his museum, where Han retrieves a bladed replacement for his hand. After realizing he is outmatched in the museum, Han retreats into a room full of mirrors, which proves disorientating for Lee, until he smashes all of the mirrors to foil Han's illusions and allow him to defeat Han, impaling him on his own spear. 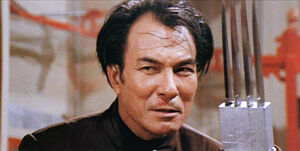 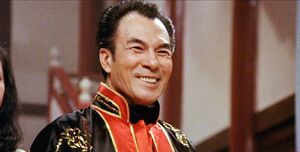 Retrieved from "https://villains.fandom.com/wiki/Han_(Enter_the_Dragon)?oldid=3702609"
Community content is available under CC-BY-SA unless otherwise noted.