Imprisoned Man-Eater
The Hand Demon is a minor antagonist of the Demon Slayer: Kimetsu no Yaiba Manga and Anime. He is, however, the main antagonist of the Final Selection arc. Unlike majority of Demons imprisoned at Fujikasane Mountain who are weaker in comparison, Hand Demon managed to survive 5 decades inside the mountain, devouring dozens of Demon Slayer potentials in the process. This makes Hand Demon considerably stronger than other imprisoned Demons, with his powers close to Blood Demon Art. Because of this, Hand Demon is a hopelessly formidable foe against novice and inexperienced Slayer potentials. Hand Demon was the first Demon to demonstrate how Tanjiro Kamado views Demons.

The Hand Demon is a huge hulking monster with olive-green skin, yellow eyes with cross-hatch shaped pupils and blood-red fingernails. He used to have a very typical demonic appearance, with usual hair & clothing, but he started developing in size after he began eating several humans. He had developed several arms, and his mouth became large and his teeth jagged.

He developed so many arms that he was not only forced to stop wearing his clothing instead of shielding himself with his weapons, but also started using his legs by walking on a kind of hand to hand.

Hand Demon was once a crybaby child who was dependent of his older brother to a fault until one day turning into a demon by Muzan Kibutsuji prior to the main story. Shortly after turning into a Demon, he ended up attacking and devouring his own brother he once relied upon.

During the Keiou year of the Edo Period Hand Demon continued to kill and eat at least one person. Originally an ordinary humanoid Demon, he was hunted down by Sakonji Urokodaki who was then a Water-Pillar Demon Slayer, tracked him down later on caught him and imprisoned him on Fujikasane Mountain to serve as one of the challenge demons of Final Selection. He carries a deep hate for Urokodaki for robbing him from his independence that has kept him alive over the years, destroying all of the Urokodaki disciples he could find. After devouring dozens of young Demon Slayer candidates, Hand Demon's body had taken a grotesque mutation, turning into an abominable monster he is seen in both manga and anime.

The Hand Demon targets lots of potential Demon Slayers by killing and pursuing one another. The aforementioned Demon, exploiting his limb-based body structure, reaches out a limb to capture the poor soul only to have it cut by the water wheel technique from Tanjiro Kamado. He says that taking the note of his interloper that he's another "cute fox".

He asks the would-be Demon Slayer of what year it is in the Meiji period, only to be told that it is the Taishou period at the moment, which enrages him. The Ghost, cursing Sakonji Urokodaki for trapping him in the wisteria-riddled Fujikasaneyama, wrathfully explains to Tanjiro of how his master trapped him during the Keiou age of the Edo period. His first intended victim suspects him of lying because of the existence of demons who were captured for Final Selection, but still, The Hand Demon claimed to have eaten 50 children. Then he observes that Tanjiro was the 14th apprentice of Sakonji that he had met, having killed and eaten all the others. Sabito and Makomo describe the two that stood out most of his mind. He mocks the collective fate of his victims particularly Makomo's initial reaction to it, explaining the significance of the fox mask that Tanjiro was wearing.

This enrages Tanjiro, who accuses him of cutting apart the different limbs with which the spite-filled demon attacked him. One of the deadly villain's limbs, however, it gets through Tanjiro's line of attack, delivering a strong punch that knocks unconscious the enraged youth. He reaches out some of its limbs toward him, only to be avoided at the last second. He states, as the blow hits, that it makes the same sound as Sakonji did, crying out the name of the latter in fearful rage. The attack completely severs the head of the multi-handed enemy, the demon panicking over his fast-approaching death. Instead, thinking that Tanjiro would look at him with contempt as he died, he was saddened to see the eyes of the youth filled with sorrow.

As Hand Demon begins to disintegrate in death, he remembered his human past; that he had a brother and he relied much on his brother for help - only to quickly forget about him before the Demon's existence finally expired. After Hand Demon's disintegration completed, Tanjiro prayed to god that in Hand Demon's next life do not make him a Demon.

Although an overall minor antagonist, the effect he left was significant: it was revealed that Sabito and Giyu Tomioka (the current Water-Pillar Demon Slayer) were friends who were trained together under Sakonji Urokodaki. Because Giyu and other potentials survived at the sacrifice of Sabito, who was killed by the Hand Demon and possessed considerably more talents as the Slayer, Giyu went into a deep self-hate born of survivor's guilt. 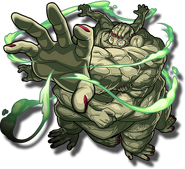 Retrieved from "https://villains.fandom.com/wiki/Hand_Demon?oldid=4030377"
Community content is available under CC-BY-SA unless otherwise noted.