President and CEO of Hyperion
Owner of Atlas (formerly)

Find a physical form he does not have to share.
Manipulate and corrupt Rhys into siding with him so he can betray him and take over his mind.
Kill Rhys and take complete control over his body.
Murder Rhys for destroying his legacy (all failed).
Kill Bandits while trapped inside a gun (succeeded).
Escape the captivity of his gun (currently).

Handsome Jack AI is one of the two main antagonists of the video game Tales From The Borderlands and appears in the game Borderlands 3 as a gun called the Handsome Jackhammer which has him trapped inside. He is exactly like the original Handsome Jack but he can only be seen by Rhys as a ghost like hologram.

He was voiced by Dameon Clarke, who also voiced the original Handsome Jack.

When Rhys attempts to use Professor Nakayama's ID drive to track the money he lost, Rhys accidentally downloaded the Handsome Jack AI into his own brain. This gave life to the new Handsome Jack as he awoke inside the mind of Rhys, Rhys is the only person that is aware of the new Handsome Jack. The hologram clone was created by Professor Nakayama to continue the legacy of Handsome Jack and his plans to create a better world for Pandora. The hologram believes he is the original Jack and acts exactly like him because he has his memories, personality and dark sense of humor.

In the final episode, Jack tries to kill everyone in order to turn them into flesh bots and download himself into all of them. The plan fails and Helios crashes into Pandora, destroying everything he had built. Jack has one final confrontation with Rhys after a talk about his dead daughter and he eventually downloads himself into Rhys' cybernetics again. Jack starts to strangle him with his own robotic arm, but Rhys manages to rip off his arm. And while Jack threatens to eventually kill him, Rhys rips out all his cybernetics with a shard of glass. Jack then begins to beg on his knees for his former fan to spare him, but Rhys pulls out the echo eye. In one last, desperate attempt to kill Rhys, Jack tries to stop him only for Rhys to rip it out the last of his echo eye, severing Rhys' connection with Jack. Jack disappears and is trapped inside the echo eye, leaving Rhys to decided his fate.

If Rhys decides to kill him, he crushes the eye with the palm of his hand, destroying it along with the A.I. of Handsome Jack which finally kills him once and for all.

If Rhys decides to keep him, he puts the eye in his pocket, leaving the A.I. of Handsome Jack trapped inside it forever, but also fulfilling his wish of immortality.

It’s revealed that keeping the Jack AI imprisoned is the canon choice and after Rhys begins to build Atlas back up he decides to imprison his enemy inside a gun called the Handsome Jackhammer which can hurt or kill its owner and now Rhys both punishes Jack by trapping him but also allows him to do what he always wanted which was punish and kill bandits.

Episode Five: The Vault of the Traveler 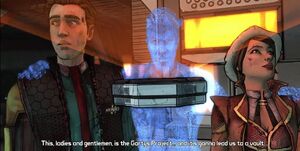 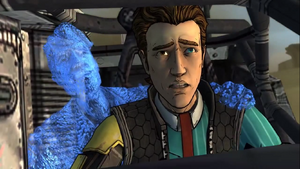 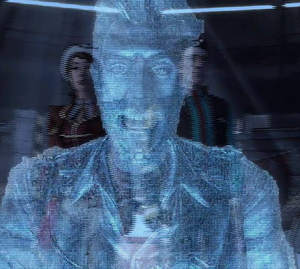 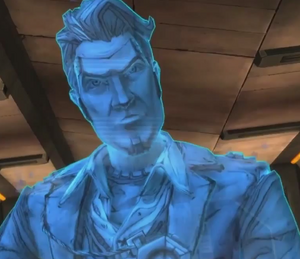