Henry "Hank" Daughtry is a secondary antagonist in the 2014 video game inFamous: Second Son, and a minor character in inFamous: First Light. He is a petty criminal with the ability to manipulate smoke, and is pivotal in causing Delsin Rowe to activate his powers.

He was voiced by David Stanbra.

Not much is known about Hank Daughtry's past, but he became a petty criminal around the age of twelve, often pulling robberies and break-ins. He would often end up in jail or prison every time he was caught, but he managed to escape every time by using his intellect and streets smarts to await for a "golden opportunity". Despite his crimes, Hank took pride in the fact that he never harmed anyone during his crimes sprees as he didn't want to hurt innocent people. During his tenure as a criminal, Hank would father an unnamed daughter, whom he became greatly protective of. Unbeknownst to Hank, he held the conduit gene that gave those who had it super powers, and Hank was gifted with the ability to manipulate smoke. Once his powers manifested, Hank became unstoppable when he performed his crimes.

After gaining his powers, Hank caught the attention of the Department of Unified Protection, an organization that imprisoned conduits, whom arrested him in Curdun Cay. While imprisoned there, Hank was experimented on Brooke Augustine, the head of the D.U.P., and forced to sleep on the floor due to him combusting objectives in his cell. He attempted to escape from Curdun Cay twice, but failed due to heavy security and their advanced equipment to handle with conduits. Despite Curdun Cay looking bleak on escaping from, Hank found his golden opportunity in hiding a paper clip while moving to another prison. Though Hank thought he had planned the escape on his own, Augustine also coordinated it to allow Abigail Walker free after she passed her test.

Using the paper clip, Hank freed himself from his restraints and used his smoke powers to allow him, Abigail and Eugene Sims to escape from the D.U.P. vehicle. Daughtry was rescued from the vehicle by Delsin Rowe, but grabs the latter when his brother, Reggie appears and attempts to arrest the criminal. During the standoff, Delsin unlocked his powers by absorbing Hank's smoke manipulation, causing him to faint while Daughtry escaped. Hank reaches to a village longhouse where he sets fire to create a distraction, and attempts to tell a local woman Betty to leave. He is tackled by Delsin during the confrontation, and attempts to escape from the latter while explaining that he can't undo what he did to him.

Attempting to escape, Hank is confronted by Augustine and the D.U.P., and is imprisoned in concrete where he is believed to be dead by Delsin. He was returned to Curdun Cay by Augustine, but managed to escape two weeks later and made his way to Seattle to cause more trouble. While traveling through Seattle, Hank was confronted by Delsin once again, but made a shaky alliance with Rowe since the latter had come to accept his abilities. Eventually, Hank was caught by Augustine, who decided to make a deal with Daughtry to have him lure Delsin into a trap if he wanted his freedom and his daughter's safety. Agreeing with the deal, Hank tricks Delsin into the trap by informing him that Abigail and Eugene were captured. Though successful in the plan, Hank would be confronted by Delsin once again, who revealed that his brother died in the process. Despite telling Delsin that he didn't know, the latter places a chain around his neck while he tried to call out to his daughter.

If Delsin spares Hank, he thanks him and asks Rowe if he wants to join him and his daughter in escaping. Delsin refuses to leave, and Hank reunites with his daughter to leave Seattle. If Delsin decides to get revenge, Hank is killed by being strangled as his daughter continue to calls his name. 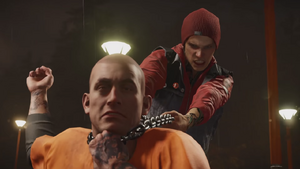