Villains Wiki
Register
Don't have an account?
Sign In
Advertisement
in: The Simpsons Villains, Cartoon Villains, Mastermind,
and 50 more

The Simpsons; You Only Move Twice

Owner and CEO of Globex Corporation

Hank Scorpio is the villain deuteragonist of The Simpsons Season 8 episode "You Only Move Twice".

He was voiced by Albert Brooks, who would later voice Russ Cargill in The Simpsons Movie, as well as Bernie Rose in Drive and The Businessman in The Little Prince.

Scorpio is known to be an evil genius and the millionaire owner of Globex Corporation who resides in Cypress Creek. He plans to take over the USA East Coast with his brand new device called the Doomsday Device. Despite being a ruthless and powerful villain, Hank is a kind, always cheerful and polite person to his subordinates and his citizens, which makes him a very sympathetic guy, in contrast to the behavior of the tyrannical, greedy Charles Montgomery Burns. Also, unlike many supervillains, Scorpio cares for his own people of Cypress Creek, even going so far by offering his employees free dental care and participating in their 50K run.

Homer Simpson (one of the protagonists of the show) moves to Cypress Creek after learning of a new career (from Scorpio's secretary Miss Goodthighs) that will offer healthcare benefit for himself and his family. After discussing this further with the family, his wife Marge agrees to the moving, adding that they might need Homer's new salary and that their old house is tearing itself apart. As the Simpsons arrive to their new house in Cypress Creek, Scorpio welcomes them with a gift basket before giving Homer a job as the new supervisor of employees working in Globex's nuclear division. In spite of Homer's incompetence as a safety inspector back in Springfield, Homer actually does a good job motivating Scorpio's employees in Globex's nuclear division (even going so far by offering them hammocks to calm them down from overworking). Because of his success, Scorpio happily informs that the productivity in the nuclear division is currently up 2% thanks to Homer's motivation skills, leaving his family to be very proud of him.

Needless to say, Homer and his family are unaware that Scorpio is a criminal mastermind. At one time, Scorpio has called in a ransom for gold against the United Nations and uses one of his arson weapons to blow the Queensboro bridge to prove that he's not bluffing, saying that they have 72 hours to meet his demand. He also managed to catch a British secret agent named James Bont, who attempted to escape but ended up being knocked down by Homer (who thought he was a loafer). After thanking Homer for stopping Bont, he had his men to shoot down Bont. Despite being present at these scenes, Homer remains oblivious to Scorpio's true occupation and goal.

Though Homer enjoys his new life in Cypress Creek, he is horrified to learn that his family have become very unhappy in Cypress Creek and want to go back to Springfield (Marge has been moping around drinking glasses of wine since the house is capable of doing chores itself, Lisa has become extremely allergic to all wildlife around Cypress Creek, and Bart is forced to undergo a remedial class because he doesn't understand cursive handwriting). Homer is opposed to this, stating that he's doing a great job for the first time in his life, but his family are still unhappy.

Torn between maintaining his good job and making his family happy, Homer heads back to Scorpio's base, where it is being attacked by arriving U.S. army soldiers, who are intending to stop Scorpio in his tracks and destroy the Doomsday device. As Scorpio and his men attempt to handle the situation, Homer (who still remains unaware of what's really happening) explains to him about the misery that his family is suffering from. Feeling somewhat sorry for Homer, Scorpio convinces Homer to do what's best for his family and allows them to go back to Springfield. Homer thanks Scorpio for everything, and as he leaves, Scorpio and his men manage to defeat the rest of the army soldiers, sending them to flee (much to Scorpio's delight, as he laughs while scaring the remaining soldiers away with a flamethrower). After the Simpsons returned to Springfield, a newspaper article shows that Scorpio and his forces have finally succeeded in taking over the East Coast. Homer received a letter from Scorpio showing his gratitude for Homer's assistance and that he and his family are free to come to the Coast anytime they want. He also sends the Denver Broncos football team as a gift, though Homer would have preferred the Dallas Cowboys.

As such, the Simpsons have remained unaware of the fact that Scorpio is a villain mastermind, and it is unlikely that they will find out about it. 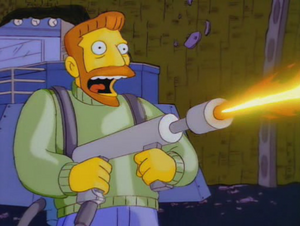