Werewolf
Hannah Stoneman is a villainess in Werewolf Skin, one of the books in R.L. Stine's Goosebumps series, as well as the Goosebumps TV episode under the same title.

In the TV episode, she was portrayed by Terra Vnesa.

Hannah Stoneman was the first new friend for Alex Blackwell after he moved to Wolf Creek to live with his Uncle Colin and Aunt Marta. They both investigated rumors of werewolves roaming the woods at night, and they figured that the werewolves were the Martlings; who Alex's aunt and uncle stated were eccentric and weird. Alex later learns that the Martlings don't exist, and his aunt and uncle are the werewolves; when he catches them removing their werewolf skins. Hannah helps Alex in burying the skins and removing the curse from Aunt Marta and Uncle Colin, however, it is later revealed that Hannah is a werewolf herself.

The book and the TV show each have different endings. On TV, Alex closely analyzes one of his photos and sees Hannah wearing a werewolf skin of her own. When Alex turns to Hannah, she simply responds that she told Alex that "I don't bite." The book has a much darker ending, with Alex and Hannah in the empty cabin next door and seeing a third werewolf skin. Shortly afterward, Alex turns to see Hannah in the werewolf skin, which she revealed to be her own. After the revelation, Hannah turned heel and attacked Alex, presumably turning him into a werewolf. 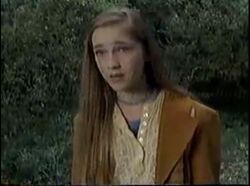 Hannah as she appears in the television episode. 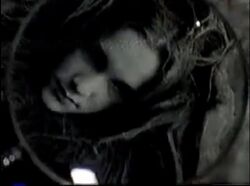 Hannah's photo.
Add a photo to this gallery

Retrieved from "https://villains.fandom.com/wiki/Hannah_Stoneman?oldid=4345601"
Community content is available under CC-BY-SA unless otherwise noted.