The Silence of the Lambs (movies)

Torment Clarice Starling and hypnotize her into becoming his sister (succeeded at tormenting her, but failed at making her become Mischa; goal later abandoned after falling in love with her).
Avoid and escape from the hands of the authorities with usage of cat and mouse game.
Enjoy murdering and consuming the flesh of other people.

Hannibal Lecter is the iconic titular fictional character in the series of Thomas Harris of the same name and their film and television series adaptions, being its central character overall. He is one of the two main antagonists in The Silence of the Lambs and Red Dragon, the antagonist turned anti-hero in Hannibal, the main protagonist turned anti-hero in Hannibal Rising and the titular main antagonist of the TV show, Hannibal. The character is an extremely brilliant but psychopathic serial killer.

Hannibal Lecter was born in 1933 in Lithuania. He was born of a Lithuanian count (father) and an Italian noble (mother), and at first he led a pleasant life devoted to his younger sister Mischa. As the war was ending, Nazi turncoats and others fleeing the Russian advance into Germany hid out on their parents' estate. Keeping them hostage, the deserters ran out of food in the harsh winter and eventually cannibalized his sister, leading her away by pretending they were going to play. Lecter prayed daily for his beloved sister's return but eventually found her remains, sparking his obsession with cannibalism and rendering him temporarily mute. It was also at this moment that he lost his belief in God.

He later escaped from the deserters and hid in an orphanage, where he was found by his uncle and his uncle's Japanese wife, Lady Murasaki. Hannibal forms a quasi-romantic attachment to her after his uncle's death, but she is unable to turn him from his obsession with avenging his sister. To this end, he hunts down, tortures and kills every man who took part in her death, forsaking his relationship with Murasaki. Hannibal then enters the Johns Hopkins Medical Center.

Lecter becomes a prominent psychiatrist and part of Baltimore's high society. In the 1970's he commits a series of murders and attacks which leave nine dead and three seriously wounded. Most of the victims are unnamed and is unknown what had happened to them. One victim was a census taker who tried to quantify Lecter, who in turn ate the man's liver. A Princeton student disappeared and was likely eaten. Lecter's sixth victim was a bow hunter who was savagely murdered in his workshop. Lecter's next three victims were killed within a nine day span. His last known victim, Benjamin Raspail, was found dead in a church pew, with his heart pierced and missing his thymus and pancreas. Lecter served these organs to the Baltimore Philharmonic Orchestra. His surviving victims included Mason Verger, a wealthy, sadistic pedophile who Lecter drugged and forced to mutilate his own face, and an unnamed person who was committed to a private mental hospital in Denver.

Lecter's last victim before capture was Will Graham. Graham was investigating a series of murders and was intrigued by the injuries inflicted on the sixth victim. He had been murdered in his workshop, with tools stabbed into his body. Graham noticed an old wound on the man's thigh and discovered that Hannibal Lecter had once treated the man. Graham visited Lecter more than a week later, by this time three more people were killed. Lecter was polite and appeared to cooperate, but professed ignorance. While Graham looked around Lecter's office, he saw something which implied that Lecter was the killer. When Graham was on the phone, Lecter knifed Graham, nearly disemboweling him. Lecter was caught shortly afterwards, while Graham was hospitalised. A week later, Graham realised that the sixth victim was killed in the same manner as "Wound Man", a medieval drawing of major injuries sustained in battle.

Lecter was put on trail for the murders and was found not guilty for reasons of insanity. He was incarcerated at the Baltimore Hospital for the Criminally Insane. He was branded a "pure sociopath"; in truth, they did not know what condition he suffered from. He was branded a "monster" and was known by the tabloids as "Hannibal the Cannibal".

Several years after his incarceration, Graham consults Lecter in an attempt to catch serial killer Francis Dolarhyde, who is known to law enforcement and the media by the pseudonyms "The Tooth Fairy" and (later) "The Red Dragon". Lecter covertly supplies Dolarhyde with Graham's address, which ultimately results in Dolarhyde disfiguring Graham before Graham kills him. After Graham recovers, lecter sends him a note in which he wishes his old foe well and says he hopes Graham isn't "too ugly".

A few years later, a serial killer known as Buffalo Bill begins kidnapping, killing, and skinning women. The FBI, desperate for some insight, sends trainee Clarice Starling to unknowingly gain information. After she is assaulted by one of the inmates, Lecter becomes interested and gives her cryptic clues to Bill's identity in return for painful memories of her childhood. She is eventually able to use these clues to track Bill down, but not before Lecter stages a dramatic and bloody escape, disappearing without a trace.

Hannibal Lecter reappears in Florence, Italy under the identity of "Dr Fell", an art historian. He is discovered by a local policeman, Inspector Pazzi, who attempts to sell him to Mason Verger. Lecter kills Pazzi and escapes, returning to America and seeking out Starling, who is still searching for him. He is, however, captured by Verger, who wants revenge and plans to feed the doctor alive to man-eating pigs. But due to the machinations of Verger's sister Margot, who was routinely abused by her brother as a child, Lecter is rescued by Starling. He goads Margot into killing Mason, assuring her that he will take the blame for the murder.

Lecter then abducts the unconscious Starling and begins brainwashing her, hoping that she will become Mischa. He kills Paul Krendler (a Justice Department official who is an adversary of Starling's) by lobotomizing him and serving his brains for dinner. The dinner party consists of Lecter, Starling, and Krendler himself, who is still alive for part of the meal and unwittingly eats some of his own brains. Starling, under the effects of drugs as well as Lecter's hypnosis, knowingly and willingly cannibalizes Krendler's brains. However, when it later becomes clear that she will not be sublimated, she and Lecter become lovers.

The two are last seen in Rio de Janiero, where Starling's loving companionship has suppressed the doctor's cannibalistic urges, and they enjoy a hedonistic and self-indulgent life of high culture together. It is implied that Lecter has conditioned Starling into becoming nearly as calculating and dangerous as he is.

Hannibal possesses a very convoluted and impenetrable personality. It is impossible to determine exactly what mental illness he suffers from, or even if he suffers from one at all, as his knowledge and training enable him to outsmart the standard tests with minimal effort. Lecter is believed to have antisocial personality disorder. However, in the books, he is only described as such because they do not know what to call him. Although he has no remorse, he is not shallow, nor was he a drifter or have any other traits linked to the disorder. Perhaps a more fitting diagnosis would be narcissistic personality disorder as he sees himself as a superior form of life, fit to decide who is worthy to live or die. He describes the majority of human kind as "poor dullards" and yet thrives on others' admiration, a case in point being his recalcitrant unwillingness to part with Francis Dolarhyde's letter because, according to Will Graham, "it was full of compliments."

Like many evil geniuses, Lecter is impeccably cultured, appreciative, and sophisticated, despite his vicious tendencies. Rather than simply killing for fun, he kills those who exhibit poor taste or bad manners, fine taste and good manners being both an obsession and a compulsion to him, similar to the villain, Jigsaw. He also kills those whom he finds morally cruel, pugnacious, objectionable, and repulsive, such as pedophiles, being quite protective of children as the result of his sister Mischa's murder. This is also served as the catalyst for his serial murders. Contrary to popular belief, Lecter is an inoffensive sadist. While he does enjoy killing his victims, usually in elaborate styles, many of the victims die almost instantly, or at the very least painlessly. Further evidence is when he attacked the nurse, his pulse did not exceed 85 bpm, rising from 72 bpm. Whilst beating a police officer to death, his heartbeat rose to a mere 90 bpm, but soon dropped. The treatment of his victims may lie in his love of chaos and destruction of a universe heading towards high entropy. Whilst watching A Brief History of Time by Stephen Hawking, he believed that time would reverse itself, so disorder would return to order.

His fondness of Clarice Starling is evident from their first meeting, and though initially it is only on his part, it eventually becomes mutual. Lecter is at first fascinated by Starling's mix of foolishness and craftiness, such as when she uses his embarrassment at her assault to gain information. He then begins to trade answers about the case for details on her background, and he continues to contact her even after his escape. After his return to the United States of America, he seeks her out without her knowledge, and it is hinted by numerous characters that he has fallen in love with her. After she rescues him and resists his brainwashing, the two become lovers, their romantic relationship suppressing his cannibalistic urges. 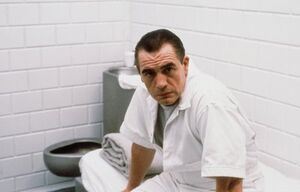 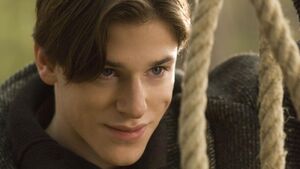 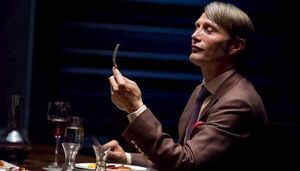 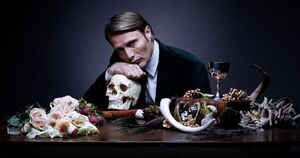 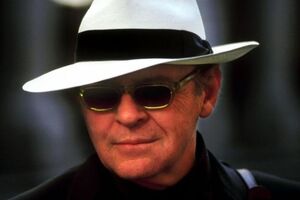 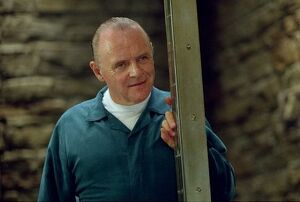 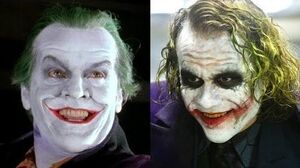 Top 10 Iconic Movie Villains
Add a photo to this gallery

Retrieved from "https://villains.fandom.com/wiki/Hannibal_Lecter?oldid=2498319"
Community content is available under CC-BY-SA unless otherwise noted.