Red Dragon (books), The Silence of the Lambs (movies)

Devouring the flesh of his victims, using psychoanalysis on his patients and enemies, cooking, reading, playing games with his favorite enemy Clarice Starling.

To enjoy eating the flesh of others, avoid the authorities in a game of cat and mouse, tormenting Clarice Starling.

Hannibal Lecter is the main antagonist of the Silence of the Lambs franchise. He is a skilled and deeply disturbed psychopathic killer.He was portrayed by veteran actor Anthony Hopkins, and by Brian Cox in the 1986 film Manhunter, and in the 2013 television series, he was played by Danish actor Mads Mikkelsen.

Hannibal was born in the wake of World War II on August 7, 1944 on the Eastern Front, Lithuania. He was born of a Catholic count and at first led a pleasant life devoted to his younger sister Mischa. When the war was ending, Nazi turncoats and others fleeing the Russian advance into Germany hide out on their parents estate. Keeping them hostage, they ran out of food in the harsh winter, eventually cannibalizing his sister, leading her away by pretending they were going to play. Lecter apparently prayed daily for his beloved sister's return, but eventually found her remains, sparking his obsession with cannibalism and rendering him temporarily mute. It was also at this moment that he lost his belief in God.

He later escapes from the deserters and hid in an orphanage, where he was found by his uncle and his Japanese wife, Lady Murasaki. He forms a quasi-romantic attachment to her after his uncle's death, but she is unable to turn him from his obsession with avenging his sister. To this end, he hunts down, tortures and kills every man who caused her death, forsaking his relationship with Murasaki. Hannibal then enters the John Hopkins Medical centre.

Hannibal becomes a prominent psychologist and part of the high culture of Baltimore. He secretly continues his cannibalistic activities, his victims including a musician who played a favorite piece of his poorly, and Mason Verger, the only victim of his to survive, albeit as a paraplegic with no face, and serves his victims at his popular dinner parties. However, Hannibale is later caught by Will Graham, a special agent with the FBI who recognizes the wounds on one of his victims in a book that Hannibal has on his bookshelf.

Several years after his incarceration, FBI Special Agent Will Graham, consults with him to catch serial killer Francis Dolarhyde, known only to law enforcement and media by the pseudonyms "The Tooth Fairy" and later, "The Red Dragon." He does so successfully.

A few years later, a serial killer known as Buffalo Bill, begins kidnapping, killing, and skinning women. The FBI, desperate for some insight, sends trainee Clarice Starling to unknowingly gain information. After she is assaulted by one of the inmates, Lecter becomes interested and gives her cryptic clues to his identity in return for painful memories of her childhood. She is eventually able to use these clues to track Bill down, but not before Lecter stages a dramatic and bloody escape before disappearing without a trace, though he sends Starling the occasional letter, his fascination with her apparent.

He reappears in Florence, Italy as a prominent but reclusive historian and lecturer under the name Dr Fell. He is discovered by a local policeman, who attempts to sell him to Verger. He escapes, returning to America and seeking out Starling, who is still searching for him, a mutual fascination between the two evident. His part, however, is caused initially as he begins to feel she could become a place for Mischa to inherit (he plans to brainwash her). He is, however, captured by Verger, who wants revenge, and is due to be fed to flesh-eating pigs alive. However, due to the machinations of Vergers sister, who was routinely abused by her brother, and Starling he is rescued by the latter, and the former frames him, consensually, for the murder of her brother.

He then tries to brainwash Starling into becoming Mischa and kills Paul Krendler, her tormentor at the FBI for her by serving his brains at dinner. She willingly eats, but when it becomes clear she will not be sublimated, the two become lovers.

The two are last seen in Rio de Janiero, where Starlings presence has suppressed his cannibalistic urges, and they live a life of high culture.

Hannibal possesses a very convoluted personality. It is impossible to determine exactly what mental illness he suffers from, or even if he does at all, as his knowledge and training enables him to outsmart the standard tests without even trying. Few symptoms are described, though in Hannibal he describes his disbelief that the universe is linear, expecting somehow that time will begin to run backwards and, as he puts it, "the broken teacup will run back together" and Mischa will return. Hannibal has antisocial personality disorder, which is the proper medical term for sociopathy (however while most sociopaths are misanthropic and only superficially charming, Hannibal is genuinely charming and kind to those whom he likes). A more fitting diagnosis would be a narcissistic personality disorder as he sees himself as a god-like and superior form of life, fit to decide who is worthy to live or die. He describes the majority of human kind as "poor dullards" and thrives on admiration, being unable to part with Francis Dolarhyde's letter because according to Will Graham "it was full of compliments."

Like many evil geniuses, Hannibal is impeccably cultured and sophisticated despite his vicious tendencies. Rather than simply killing for fun, he kills those who exhibit poor taste or bad manners, fine taste and good manners being both an obsession and a compulsion to him--similar to the villain Jigsaw. He also kills those whom he finds morally repulsive such as pedophiles, being quite protective of children as the result of seeing the murder of Mischa when he was a child. This is also thought to have served as the catalyst for his mental illness. Despite his cordial and refined personality and good manners, Hannibal is a sadist who derives great pleasure and amusement from killing his victims, usually in a particularly gruesome manner.

His attachment to Clarice Starling is evident since their first meeting, and though initially only on his part, she begins to return it. He is at first fascinated by her foolishness and knowledge, as she uses his embarrassment at her assault against him to gain information. He then begins to trade answers about the case for details on her background, and continues to contact her after his escape. After his return to the US he seeks her out without her knowledge, and it is hinted by numerous characters he has fallen in love with her, in his own, twisted way. After she rescues him and resists his brainwashing the two become lovers, with her presence suppressing his cannibalistic urges.

Hannibal is possibly the most knowledgeable man alive, possessing an IQ of 200. He is an expert in psychology (though he does not believe it to be a science) and is able to frighten, manipulate and bend others to his will with mere words. He is also able to use his immense presence and commanding but subtle personality to great effect. His mental abilities are staggering, having created a memory palace" to rival the Vatican- it is stated it would have marvelled the greatest medical minds, had they been able to see it. As such, he does not forget anything, able to revisit a specific memory whenever he wishes in one of the "rooms."

Lecter is described is 6 feet 5 inches and weighs 220lbs, with an incredible wiry strength in his arms. In The Silence of the Lambs it is revealed that Lecter's left hand has the condition called mid ray duplication polydactyly, i.e. a duplicated middle finger. In Hannibal, he performs plastic surgery on his own face on several occasions, and removes his extra digit. Lecter's eyes are a shade of maroon, and reflect the light in "pinpoints of red". He is also said to have small white teeth and dark, slicked-back hair with a widow's peak.

A census taker once tried to test me. I ate his liver with some fava beans and a nice Chianti. - In Silence of the Lambs.

I do wish we could talk longer but I'm having an old friend for dinner. - In Silence of the Lambs.

Paul will not miss this bit any longer. - In Hannibal.

I'm afraid this is going to hurt." - In Hannibal.

As is noted in the "Trivia" section below, Dr. Lecter spends most of his time in two of his major rolls as a minor antagonist or even semi-willing/unwilling protagonist, as he is imprisoned and assists his captors in stopping other villains.

Dr. Lector is considered a seminal character for this type or horror, because his character is so well designed and his back story so terrifying, it is difficult for any action his character can make to actually live up to the horror one imagines he can inflict. 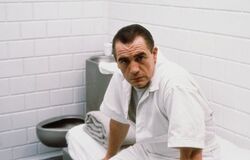 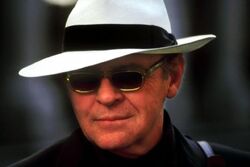 Dr. Hannibal Lecter in the 2001 movie sequel Hannibal.
Add a photo to this gallery