Kill those in the rebellion under King Garon's orders.

Hans (in Japanese: ガンズ, Ganzu, lit. Ganz) is a non-playable character and a major antagonist in Fire Emblem Fates on all routes.

He was voiced by Hisanori Koyatsu in the Japanese version, and by Travis Willingham in the English version, who also voiced Garon in the same game.

Hans is a soldier of Nohr and a criminal who has committed a number of heinous atrocities that include murder and robbery. Lustful for achieving success in life, Hans abuses the power ceded to him in order to attain his goal.

Several years prior to the events of the Fire Emblem: Fates, Xander had actually arrested Hans, but the criminal was released by Garon after having supposedly "rehabilitated" in prison.

Garon deploys Hans to assist Corrin on a "redemption" mission by exploring a supposedly abandoned Hoshidan fort near the edge of their borders. After the party unexpectedly encounters Hoshidans guarding the fort, Hans kills one of them, forcing the remaining Hoshidans to attack the party, much to the dismay of both Corrin and Gunter. Following the battle that ensues, as the Avatar and Gunter prepare to return back to Nohr, Hans ambushes them, whereupon he succeeds in driving Gunter off the cliff into the yawning void of the Bottomless Canyon. He then attempts to kill Corrin in the same vein, but fails to do so as they, enraged by Hans' betrayal, activates the Dragon Fang skill. As Corrin moves in to strike Hans, furiously demanding to know the reason behind his betrayal, Hans only tells them that Garon told him to do so. Before they can ask why, they are pulled away and into the chasm by the haunted Ganglari. Hans promptly makes his escape, presumably back to Nohr to report the success of his mission to Garon.

Hans appears in Chapter 13 as part of Camilla's forces. Although defeated in battle, he manages to survive. Leo appears and attempts to kill Corrin, but he and his forces are forced to flee when Scarlet and her Chevian rebels arrive.

Later on, in Chapter 24, it is revealed that Garon has promoted him to the rank of commander. While passing through an underground passage under Elise's guidance, the Hoshidan army accidentally stumbles upon a training ground. Obscured by a statue, the army watched as Hans enters the grounds as Nohrian Heroes and Generals are engaged in their training. One of the Generals later discovers the Hoshidan army, whereupon and Hans gleefully orders his troops to use them as practice targets. While the soldiers are unable to kill Corrin, Hans takes over and launches several powerful blows at them. Before he can land the killing strike, Lilith arrives and takes the blow for Corrin, sending them into a fit of rage.

During the battle that follows Lilith's death, Hans takes command of his soldiers in an attempt to kill the Hoshidans. He fails to kill them and dies in battle. As a result of his death, the Nohrian soldiers who were battling them decide to surrender.

Hans reappears in Chapter 13, where he joins Corrin in their plans to stop the rebellion uprising that has broken out in Cheve. The Nohrians come out victorious and the army has spared the lives of the enemy soldiers. Hans, having been ordered by Garon to kill not only the remaining wounded Hoshidan troops and Chevian knights, but also the Chevian civilians following Corrin's defeat of Scarlet. Corrin attempts to stop him, but Hans claims that Garon ordered him to do so and cannot listen to Corrin since Garon's words is the law, before continuing his killing spree. According to Camilla, Hans also killed Scarlet in a particularly "gruesome manner" after she was defeated by Corrin

In Chapter 14, Hans later gives Garon his report, crediting Corrin with most of the work he had done, much of their indignant outrage. After the Nohrians kills the band of Hoshidan soldiers that arrive to assassinate Garon, he orders Hans and Iago to kill all the singers in Nestra and they leave to do it.

Hans is also briefly seen in Chapter 16, where Garon welcomes Gunter back into the Nohrian army. Hans also greets him back, but Gunter remains silent towards him.

Hans later reemerges following the conclusion of the fierce defense put up by Sakura in Chapter 22. Upon his entrance, he mercilessly slays a few of the Hoshidan prisoners of war who surrendered with, but not including, Yukimura, Subaki and Hana. Although Xander and the others try to stop him from killing any more prisoners, they are halted by Garon, who threatens to execute them for treason if they continue in their protests.

Hans makes one final appearance in Chapter 26, where he, along with Iago and Garon's loyalist, attempts to kill Corrin for sparing Hinoka. The joint effort of these deceitful characters proves to be in vain, as Corrin, working alongside their siblings and army, manages to kill Hans and Garon's loyalist and Leo personally kills Iago, ending their tyranny and avenging all the innocents they killed.

In Chapter 14, following Xander's return to Castle Krackenberg after his return from Cyrkensia, Hans is observed to be conversing with Iago. Within this exchange, Hans asserts the impossibility of Xander being convinced to join Corrin's cause, to which Iago disagrees. Iago then brings up the fact that Camilla had joined Corrin's army to support his disagreement, resolutely maintaining a stance of suspicion against Xander.

Hans later reappears in Chapter 16, once again hired by Garon to kill Corrin and stop them from getting near the Infinite Chasm. Although Hans puts up a good fight, he falls to the combined might of both Hoshido and Nohr. 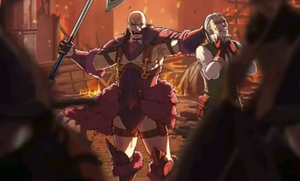 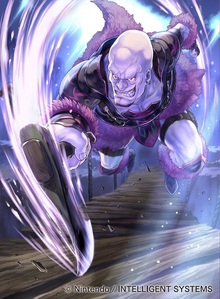 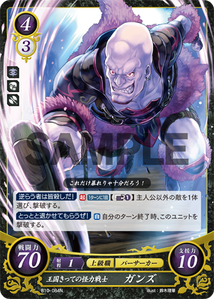 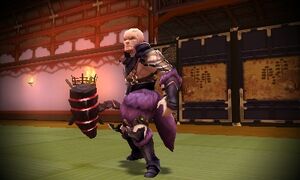 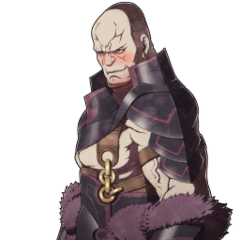 Retrieved from "https://villains.fandom.com/wiki/Hans_(Fire_Emblem)?oldid=4003646"
Community content is available under CC-BY-SA unless otherwise noted.