General of the Demon King's army.

Toxic body which is lethal to the touch.
Limited shape-shifting.
Incredible durability.

Corrupt the hot-springs of Alcanretia to halt the monetary gains made by the Axis Cult. (partially succeeded)

He was voiced by Kenjiro Tsuda in the Japanese version of the anime and by Kellen Goff in the English version.

Hans was a completely remorseless creature, who was willing to kill and eat anyone as long as it furthered his goals, he justified his consumption of humans by citing that it was his instinct as a Slime to consume anything in his path. Due to his nature as a Slime, Hans has an innate hatred of cleanliness, whether it be baths, soap or even clean air.

The constant recruitment attempts by the Axis Cult of Alcanretia took a heavy toll on Hans and practically traumatized him. Perhaps because of his ill treatment by the Axis Cult, Hans showed incredible ruthlessness during his battle with Kazuma's party.

Hans, as a powerful Slime, didn't have a remotely humanoid appearance. Due to the amount he had consumed in the past, Hans was incredibly massive, even for a Slime. His body was almost entirely made up of a transparent purple gooey substance which was toxic to organic creatures and would burn anything it touched. He appeared as a massive lump of this gooey substance, and had many tentacles sprouting out of his body which he could use as arms. Hans did have a skeleton of sorts, as shown when he was encased in ice by Wiz. He had no legs to speak of, instead crawling along the ground like a slug. Finally, he had a set of sharp teeth and iridescent red eyes.

After Hans was weakened by the combined efforts of Megumin and Wiz, his size was drastically reduced, to around the size of a human child. In this weakened state, Hans slightly resembled a jellyfish, and he lost his transparency. His face also resembled a human more then his previous state, featuring a human-like mouth and human-like teeth. Lastly his eyes turned from a bright red to yellow.

In his human disguise, Hans appears as a rugged and well-built man with purple eyes. He also had brown, slicked-back hair, with a matching brown goatee. Hans wore a green blazer with a tall collar, a black vest, black trousers with a red belt, and a jeweled necklace.

Hans in his true form. 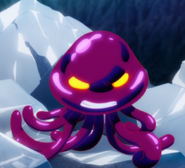 Hans in his weakened state.

Hans in his human disguise.

Hans was a Deadly Poison Slime, a type of creature that thrives off of filth and consumes any living creature or object to make itself more powerful. Eventually Hans joined the Demon King's army as one of the eight generals who maintain the barrier around his castle.

Sometime after Wiz retired, Hans was sent by the Demon King to corrupt the hot springs located in the city of Alcanretia using his powers as a Slime. Alcanretia was home to the Axis Church, a cult of fanatical worshipers who worshiped Aqua, the Goddess of Water. The Axis Cult had been a major thorn in the side of the Demon King for ages, so he wanted Hans to destroy the springs, which were the main monetary source for the Cult, thus crippling it.

Hans excepted his mission and headed to Alcanretia, where he covertly began corrupting the springs' source day by day. Unfortunately, the aggressive recruitment schemes of the Axis Cult and the cleanliness of the town soon began to take their toll on Hans, who wanted to be done with his mission as soon as possible.

Sometime after Hans began his mission, Wolbach, a fellow Demon King general, came to town on a vacation. One day, Hans tried to convince her to help him in his mission while Wolbach bathe in the mixed hot springs. However as the two generals talked, a young adventurer came into the bath. Fearing that the adventurer might get suspicious of him, Hans quickly left the scene.

Reunited with the Lich

After reaching the sources of the hot-springs, Hans reverted back to his usual human appearance and began corrupting the hot-springs using his own toxins. Eventually a band of five adventurers arrived led by the young adventurer from the hot-spring, among this team of adventurers was Wiz. Although Hans tried to play ignorant, any attempts at convincing the party of his innocence was shattered by Wiz, who instantly recognized her old friend and accidentally revealed his identity as a Slime to the group.

As Hans yelled at Wiz for revealing his identity, the young adventurer introduced himself as Satou Kazuma, the hero who had defeated the Demon King generals Beldia and Vanir, as well as the high-bounty target Mobile-Fortress Destroyer. However, after Hans tells Kazuma and his party that he is also a general of the Demon King's army, they promptly ran away.

As a Slime, Hans had the power to consume almost anything that came into his path, such as humans; the more Hans consumed, the bigger he got. His digestive system was so powerful that anything eaten by him would evaporate within a matter of seconds or minutes, depending on the size of the thing consumed.

The slime he produced was incredibly toxic, and burned anything organic when touched. If he had enough excess slime, Hans could fire drops of slime from his body like projectiles. Hans could also emit a powerful poison gas from his body.

Hans also possessed incredible durability, as he was able to survive an "Explosion" as well as Wiz using "Cursed Crystal Prison" twice. Even in an incredibly weakened state Hans was still able to tank a hit from Aqua's "God Blow".

Lastly, Hans had the ability to disguise his Slime physiology, taking the appearance of any human that he has devoured. He did this when infiltrating Alcanretia. He also used this skill after killing the hot-spring overseer, taking up his form to get access to the source. Hans apparently has an enhanced life span, considering a couple of decades a fairly short amount of time. 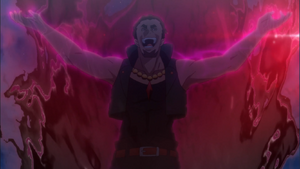 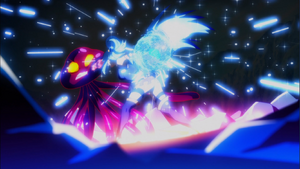 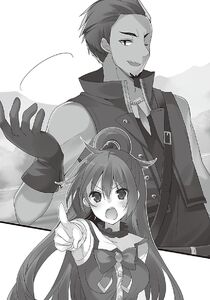 Hans in the Light Novel.