Eliminating any obstacle that intervenes with his plans.

Steal six-hundred and forty million dollars from the Nakatomi Plaza.

He is a former German terrorist leader who organizes the takeover of the Los Angeles skyscraper, Nakatomi Plaza, in an attempt to steal millions of dollars in bonds. He disguised himself as a terrorist in order to distract the police. Gruber was a calculating mastermind, as well as a highly intelligent yet callous man to the core. He is John McClane's arch-nemesis and Simon Gruber's brother.

He was portrayed by the late Alan Rickman, who also played Elliot Marston in Quigley Down Under, the Sheriff of Nottingham in Robin Hood: Prince of Thieves, Joe in Help! I'm a Fish, Severus Snape in the Harry Potter movie franchise and Judge Turpin in Sweeney Todd.

He was once part of the Volksfrei West German terrorist group but was expelled from the group, presumably for being too radical. At the time the film takes place, Gruber leads a group of heavily armed, well-funded mercenaries and organizes the takeover of a massive Los Angeles skyscraper that houses the offices of the Nakatomi Corporation. During this, they take over 30 employees hostage. When the FBI tries to negotiate, Gruber orders the release of various terrorist leaders around the world and a couple of helicopters on the building's roof. However, this is all an elaborate ruse to distract the police from the heist of $640 million in untraceable and negotiable bearer bonds that are kept in the building's vault.

Gruber takes advantage of the company's Christmas Eve party when only a limited number of people are in the building. His men take out the limited group of security guards, seal off the building, and cut the phone lines. He then leads his men to the party upstairs and takes all the guests hostage except for NYPD cop John McClane, in town visiting his estranged wife Holly. John managed to make it to a stairwell and head upstairs into the unfinished portion of the building. Gruber talks to the head of international trading, Joseph Takagi, and tries to coax the building's vault code out of him, but Takagi claims that he does not know the code and bravely asserts that they will just have to kill him. Gruber obliges this request and shoots Takagi in the head. John sees this and flees, realizing that the terrorists are hostile. In an attempt to get help, John pulls the fire alarm. Gruber tracks what floor this came off of and sends a terrorist onto the floor to kill him.

When John kills the terrorist, Gruber simply sends more men after him and proceeds with his master plan, which involved waiting for the FBI to cut the power, which would open the final magnetic lock on the vault. The hostages would then be sent up to the helipad on the roof, which would be blown up with C-4, confusing the feds and allowing the villains to escape in an ambulance. Although the charges had been put in place, John killed a henchman and took the detonators he had been carrying. Meanwhile, McClane is initially able to interfere minimally such as finally getting the local authorities to respond sooner than Gruber would have preferred, although they were intended to play an unwitting part of his plan as well.

A cat-and-mouse game follows between John and Gruber, in which the two communicate through the use of walkie-talkies where they learn more about each other. Gruber found out who John was through the assistance of a Nakatomi executive who met the cop before the attack, but he did not find out John's relation to Holly, who was using her maiden name, Gennero. In an act of desperation, Gruber headed up to the unfinished floors to retrieve the detonators, where he ended up meeting John. Using an alias and an improvised American accent, he posed as an escaped hostage, but he gave himself away by holding his cigarette in European fashion. His henchmen arrive, and a violent shootout ensues. Hans orders his men to shoot up the glass walls of the offices. Despite being barefoot, John runs over broken glass and escapes. However, Gruber retrieves the detonators.

Gruber then had the hostages sent up to the roof. The explosion still went off, but John managed to save the hostages. Meanwhile, Gruber had accidentally discovered Holly's relation to John after seeing a news report and held her hostage in the vault room. John managed to survive by tying a fire hose to his waist and jumping off of the building and shooting through a window to gain admittance to the building. John tapes his Beretta 92F pistol to his back and surrenders his MP5 machine gun to save Holly. Gruber lets his guard down and prepares to kill John, who puts his hands behind his head, only to pull his pistol, kill the remaining terrorist and shoot Gruber in the shoulder, shattering a window. Gruber managed to grab onto Holly's watch and attempted to shoot her husband so he could clamber back up. However, John manages to unbuckle the watch, sending Hans falling to his death on the concrete pavement below while the police watched and hoped that it wasn't a hostage falling.

His brother, Simon Gruber, would later plant liquid binary bombs all over the entire city of New York in the 1995 sequel Die Hard With a Vengeance. He forced John McClane to solve various riddles and puzzles to avoid more explosions under the guise of revenge. While the city's police were distracted with this, he stole gold from a federal Wall Street bank. To prevent the police from following him, he pretended to put the gold on a ship and destroy it, but he really smuggled it into Canada where he planned to melt it into statuettes of the Empire State Building so he could smuggle it out of the country. However, John got off of the ship that was to be destroyed and tracked him down, killing him in a helicopter explosion after telling him to give Hans his regards.

Even though he stated that he thought that his brother was an asshole, he did state that "life has its bonuses", implying that part of his motive was indeed revenge for his brother's death, and later confirmed this by saying "there's a difference, you know, between not liking one's brother and not caring when some dumb Irish flatfoot drops him out of a window".

Hans Gruber is ruthless, yet a very calm man; he never directly loses his temper and pretends to be a reasonable guy. He is extremely intelligent, yet boastful, seeing as he boasts about his high education and knowledge about business. He has no remorse over killing people, and pretends that it is like a normal, casual everyday thing to do, and has a very good sense of dark humor, for example, at the end of the movie when he says "Yippee-ki-yay, motherfucker", John starts laughing, and at first, Gruber looks awkwardly at him, but later starts laughing with him. Another sign of humor that Gruber has is when he often makes references to things he reads in the magazine Forbes and Time.

Despite his humor and slight facade, Gruber is not liked by many people, John McClane sees him as an completely horrible person, and even his brother, Simon, refers to him as an absolute asshole.

Ever since the character was introduced in the 1988 classic, Alan Rickman has been acclaimed for his role as Hans Gruber. Some people call him the best Christmas villain ever (as Die Hard is constantly referred to as a Christmas movie for its setting despite its unrelated plot), and some people even call him the best movie villain ever, and therefore has been called the one and only true nemesis of John McClane. Because of Rickman's impressive performance as the character, after the role, he went on to portray multiple other villains, and his popularity grew even more. Even after he dies, multiple other characters in the movies often mention Hans Gruber. 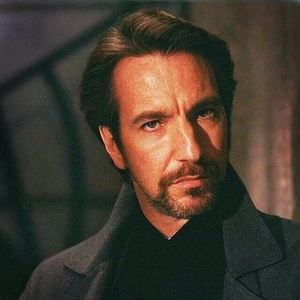 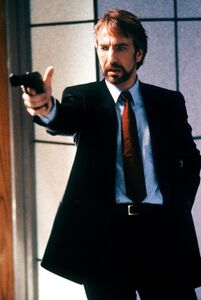 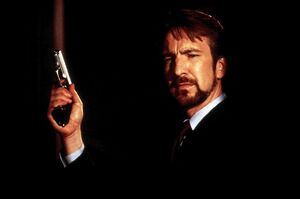 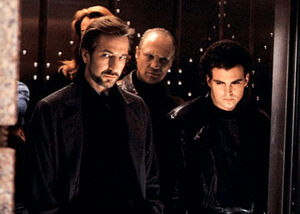 Gruber and his henchmen intrude the Plaza. 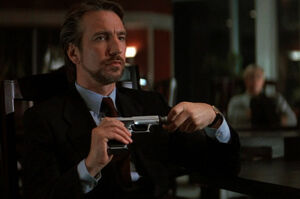 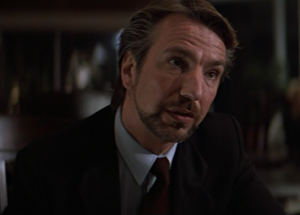 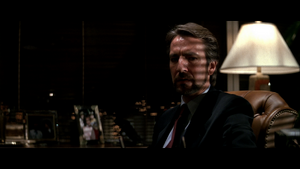 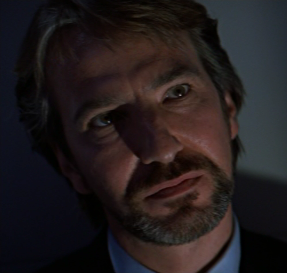 Gruber falls to his death. 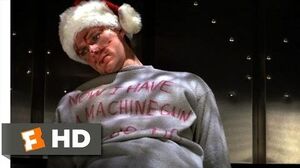 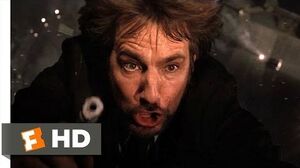 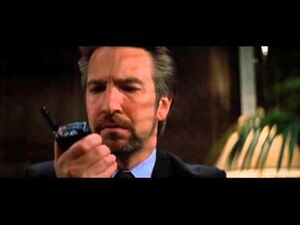 The Best of Hans Gruber 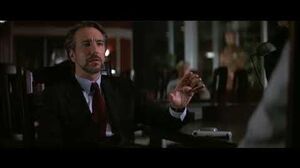