Help Eve give birth to the Ultimate Being

Doctor Hans Klamp is a character in the video-game Parasite Eve. He intentionally assisted the circumstances that lead to the rise of the video-game's main antagonist Eve.

Doctor Hans Klamp is a biological researcher living in New York City who focused mainly on mitochondrial study, so when Eve cut a bloody path of destruction through New York while spouting lines about the superiority of Mitochondria, Aya and her partner Daniel made time to interview Dr. Klamp as a local leading expert on how the creature called Eve might function. Klamp appeared completely obsessed with the subject of his research explaining some of the wondrous things mitochondria could achieve if some force could actually unite the cells to all function one way at the same time. Though highly suspicious Klamp answered only a few basic questions about mitochondria and submitted his theories about what such a supposed mitochondrial life-form could do if it obtained sentience then demanded the two to leave and let him return to his research.

Over the course of the game though more and more clues lead Aya and Daniel back to Klamp, like uncovering Klamp was the one who arranged the Kidney transplant from the mystery donor to Melissa Pearce before she was consumed by the mitochondria strain that transformed Melissa into it's avatar as Eve. Klamp was also keeping track of various humans with certain genetic codes, Daniel's son Ben, being one and last but not least Klamp had overseen the dissection of Aya's sister Maya who had died years before-hand. Even Aya's own bizarrely increased genetic traits that not only protected her from Eve's direct control but also allowed her steadily superhuman feats were tied to Klamp, who had arranged for Aya to received an organ transplant from the same host Melissa got her kidney from...Maya!

Aya, Daniel and Maeda, a Japanses researcher, tracked down Klamp to try to get answers out of him and when confronted with no place to go Klamp laid his part in the scheme out for the three of them. Klamp confesses that he intentionally was helping the Mitochondria Eve evolve faster, because she represented a new stage in evolution and he believed that humans were outdated simplistic genetic mongrels. When Aya tried to arrest him Klamp opts to die rather than be arrested by the likes of her and Daniel, instead preferring to go out in what he saw as a blaze of glory and called out to Eve to use him as a bomb to take them all out. Klamp spontaneously combusted but Daniel and Maeda leaped out the window to escape the blast, but Aya stayed to try to save Klamp, but since Aya's genetic code was unaffected by Eve, she neutralized the chain reaction Klamp's combustion was meant to set off. With his last breath Klamp asks why Aya had bothered staying to try to save him? Aya simply said because she was a cop and it was her job, to which Klamp simply stated that she was a shining example of humanity...and why it was so pathetic, after which he died. 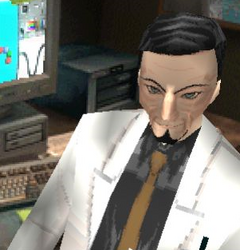 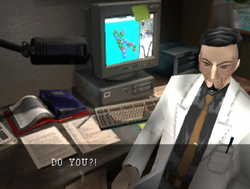 You have absolutely NO idea how insane this man is...DO YOU?! 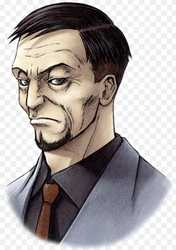 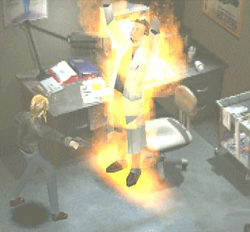 Hans Klamp dies
Add a photo to this gallery
Retrieved from "https://villains.fandom.com/wiki/Hans_Klamp?oldid=3495328"
Community content is available under CC-BY-SA unless otherwise noted.