Hans "Bubi" Winkle (b. 1933-1960) is an SS-Untersturmfuhrer serving as a concentration camp guard and a supporting antagonist in Wolfenstein: The New Order. He is also the lover and personal guard of Frau Engel.

He was voiced by Thomas Mikusz.

Hans Winkle was born in 1933 in Berlin, and comes from a family of academics as his father was a doctor, and his mother a biologist. His parents were disappointed in him, due to him having failing grades and lacked ambition in his youth. At the age of nineteen, he was employed to be a prison guard at Camp Belica, deepening his parents' disappointment. Hans eventually caught Frau Engel's attention, who manipulated her affections of him, and he became her bodyguard and lover.

Bubi first encountered B.J. After B.J. was trying to steal a battery from the Camp's HQ, Bubi and Irene both recognized him from the night train.

When B.J. returns to Deathshead's compound, Bubi is revealed to have joined Deathshead and to have been waiting for him. As B.J. climbs a ladder in a laboratory, then throws himself on top of B.J and knocks him out with a shot of Tetanospasmin.

As B.J. wakes up, Bubi contacts Frau Engel and tells her that he has a "gift" for her before dragging B.J. over and displaying him to Irene through the monitor. Bubi then stabs B.J. with a knife but B.J. then fights back by biting Bubi on his neck. After Bubi falls to the ground from the pain, B.J. has to option to finish off Bubi by stabbing him as Irene watches in horror, or leave him alone to die from bleeding out from his wound. 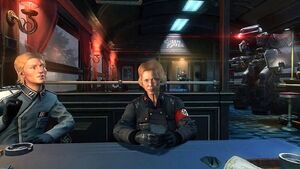 Bubi with Engel on the train. 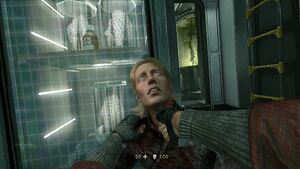 Bubi's death.
Add a photo to this gallery

Retrieved from "https://villains.fandom.com/wiki/Hans_Winkle?oldid=3702638"
Community content is available under CC-BY-SA unless otherwise noted.