Villains Wiki
Register
Don't have an account?
Sign In
Advertisement
in: Partners in Crime, Charismatic, Kidnapper,
and 48 more

Hansel and Gretel (Hoodwinked Too! Hood vs. Evil)

Eat the Super Truffles to become invincible (succeeded, but backfired).

Hansel and Gretel are the main antagonists in Hoodwinked Too! Hood vs. Evil.

Hansel and Gretel are two overweight, German-accented children. They have blonde hair. Gretel has pigtails in her hair, which she keeps in two red bows.

At first, Hansel and Gretel appeared to be fair, innocent, and enthusiastic little kids like in their base story, but the duo were eventually revealed to be evil and the masterminds behind it all when Abagail tried to free them from their supposed prison.

Hoodwinked Too! Hood VS. Evil

At the very beginning, Hansel and Gretel got "captured" by a wicked witch. Their real plot though was to capture Abigail Puckett and make her create the Super Truffles while they act like they're in danger. After they were found out, they told Granny their plan, which was to make them become rich after they sell the super goodies to every villain. They eavesdropped on the communication between the H.E.A. and Red, which was to send reinforcements to Dark Towers. Hansel and Gretel then sent in the Three Little Hench Pigs to take down the H.E.A.. They succeeded in doing so, and now nothing wasn't going to stop them that easily. After they thought about the trap for Red, Wolf, and Twitchy, they set in motion. Pretending they were tied up and innocent, Red, Wolf, and Twitchy fell for it, and after Wolf and Twitchy led them to the elevator, Red was falling into the trap. Hansel and Gretel, who were in the elevator along with Wolf and Twitchy, both put gas masks on, and Wolf, thinking nothing suspicious about it, is knocked out with Twitchy when the gas came into the vents.

Red finally found Granny, who was tied up, but she got captured and was ordered to make the super goodies. After the Truffless were created, Hansel and Gretel both ate one and became larger and stronger. They broke their deal with Verushka and took the case full of Super Truffles with them as they entered the city. They terrorized the city and after an intense battle with their foes, still held onto the Truffles. But the duo fell into the trick by Wolf and ate the rest of the Truffles, thinking the Truffles would make them invincible, but instead, they became totally helpless and so fat they were unable to move (During this time, Abagail jokes that you become super with one, but become helpless as a beachball with a whole batch.). Then Hansel and Gretel were taken away by helicopter. The fate of both siblings is unknown by this point, but Agent Nicky Flippers announces his intentions to reform Hansel and Gretel by having them doing exercise and eat a healthy diet, something which Hansel finds repulsive. 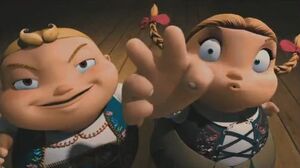 You've been hoodwinked! - Too! 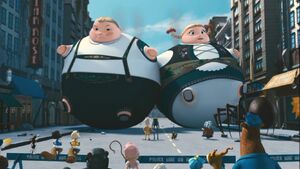