Hansen, or Hanson, is a character from the movie Dead Space: Downfall. He was a P.C.S.I. Security Sergeant and a member of Chief Alissa Vincent's team.

Following initial contact and subsequent combat with the necrotic infestation, Hansen began showing signs of strain and shock; faced with an onrushing horde of Slashers, he showed no real reaction, forcing Ramirez to haul him into an elevator and to safety.

When alerted by a rolling barrel in the Hydroponics section, he screamed out loudly forcing Vincent to step in. Disobeying her commands to shut up he pulled out his pistol, pointed it at the group and continued to yell, alerting the Necromorphs in the area to their presence. He was tackled to the ground by Officer Shen, who told him to pull it together.

At this point Hansen realized the futility of the situation. He completely lost it after getting repeatedly stabbed by a lurker, and, manically grinning, attacked Shen, using his Plasma Saw to slice her in half vertically. Immediately after, he attempted to murder Chief Vincent, nearly succeeding. However, Officer Ramirez obliterated his head with his sidearm. 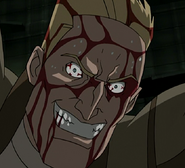 Hansen in a homicidal rage 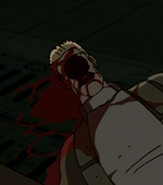