Waking Dodgers up on purpose.

Happy Cat is a corporate mascot for a large line of products and a recurring antagonist in the 2003 animated series Duck Dodgers. Dodgers frequently destroys it in a comedic fashion but it always operates, mocking Dodgers for his failure to silence him.

The Queen Is Wild

When he makes his debut in the Duck Dodgerrs episode, "The Queen Is Wild", He wakes Dodgers in an annoying manner until the latter destroyed him with a hammer, calling it the Cadet's worst Christmas present given to him. 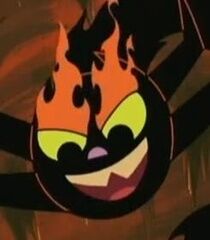