Leader of sentient vehicles out to kill humans

Enormous horsepower as an 18-wheeler

Runs over people unaffected due to its strength as a machine

The Green Goblin Truck is a black-colored White Western Star 4800 truck with a large grinning Green Goblin mask adorning the front. The eyes of the mask sometimes glow. It hauls a black trailer that says "HAPPY TOYZ Here comes another load of joy!". The rear of the trailer features a creepy image of a clown as well. There is a hidden Green Goblin Jack-in-the-box toy behind red curtains in the back of the cab.

The Green Goblin Truck first appears when it enters the Dixie Boy truckstop in North Carolina, with a driver. When Camp Loman argues with Brett Graham, the truck revs and accelerates out of the fueling station while still fueled, and nearly hit the two. The truck went static until when it goes reverse and slams Loman into a ditch while attempting to avenge his car against another truck. After the survivors in the Dixie Boy failed to find rescue assistance, the truck begins to circle around the truckstop along with other fellow trucks, preventing anyone from entering/exiting the truckstop.

All of the circling trucks including the Green Goblin truck stop moving during one day. On the same day, after the assault done by a bulldozer and the M274 Mule, the mule requests through Morse code that the human survivors should fuel all vehicles in the Dixie Boy. After exhaustion, the humans uncover that they arre enslaved by the vehicles, therefore motivating the protagonist Bill Robinson to eliminate the Mule and perform an escape for the survivors out of the Dixie Boy. During the escape, the trucks tackle and rampage the abandoned truckstop into total destruction.

The Green Goblin Truck appears again at the end in the dock area when it detects survivor member Brad, who carelessly got distracted by a diamond ring from a dead woman. The truck accelerates fast to fatally ram into Brad, and continues to move until Bill launches a rocket to destroy the Green Goblin truck. The survivors rejoice its destruction, feeling safe at last from the deadly inanimate objects and vehicles while sailing out of the coast. 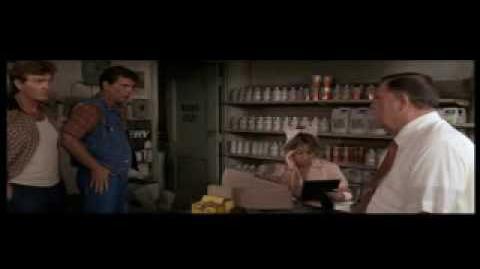 Retrieved from "https://villains.fandom.com/wiki/Happy_Toyz_Truck?oldid=3551821"
Community content is available under CC-BY-SA unless otherwise noted.