Leader of the Reapers

Secret Leader of the Collectors

Eradicate all sentient and sapient life in the galaxy and convert their knowledge and consciousness’s into a Reaper to help them "ascend".
Destroy civilizations to prevent a war between organics and synthetics and “ascend” them to make organics "immortal".
Defeat and harvest the Inusannon.
Defeat and harvest the Protheans and turn the remaining Protheans into Collectors to be its tools (all succeeded).
Kidnap enough Humans to create a new Reaper (briefly succeeded).
Use criminal gangs as tools to provide him with test subjects for experimentation (succeeded).
Acquire human biotics Grayson and Mitra to study their biotic abilities (failed).
Destroy the Normandy (succeeded).
Collect Shepard’s body (failed).
Indoctrinate Kenson and her team.
Freeze and abduct Cyrene’s colonists.
Freeze and abduct all of New Canton's population.
Freeze and abduct Freedoms Progress colonists (all succeeded).
Freeze and abduct Horizon's colonists (partially succeeded).
Freeze and abduct the colonists of the Ferris Fields colony.
Freeze and abduct the Fehl Prime colonists (both succeeded).
Prevent Vega from securing the intel and destroying the Collector vessel.
Lure Shepard and his crew into a trap on a "disabled" collector vessel and kill them (both failed).
Abduct Shepard’s crew and harvest them as retaliation for interfering with his plans (partially succeeded).
Prevent Shepard from taking out the collector base.
Use Dr Kenson and her team to allow him and the rest of the reapers through the Bahak system relay to get into the galaxy quicker.
Kill commander Shepard and study his corpse (all failed).
Indoctrinate Cerberus and use them to sabotage organic operations.
Use the rachni as slaves for a bigger army.
Attack and take over Earth.
Indoctrinate earths remaining leaders and use them to impose martial law so they can harvest earth with no resistance (all succeeded).
Hunt down the remaining Leviathans and harvest them (failed).
Destroy Earth civilization and harvest the survivors. (partially succeeded).
Capture the Citadel to ensure victory (succeeded).
Destroy the shield and sword fleets (succeeded/failed).
Help the species rebuild after they are synthesised (synthesis ending).
Serve Shepard (Control ending; both succeeded).

Harbinger is the main antagonist of the original Mass Effect trilogy. It is the leader of the Reapers, who every 50,000 years destroy all organic life and convert them into slaves for their use.

He was voiced by Keith Szarabajka, who also voiced Trigon in the 2003 Teen Titans cartoon, Daniel Holtz in Angel, Venom in Spider-Man: Web of Shadows, El Mago in Dora the Explorer, the Didact in Halo 4, Mr. Freeze in Young Justice, Reed Wahl in Bioshock 2: Minerva's Den, Kalrow in Asura's Wrath, and Cornelius Slate in Bioshock: Infinite.

Harbinger was the first Reaper to be built by the Intelligence, also known as the Catalyst, who was created by the Leviathans (the first sapient and complex species to ever rise and dominate the galaxy billion years ago). The Leviathans who noticed that many of the organic races they commanded were eventually felled by their own synthetic creations once their civilizations grew too much powerful and technological, created the Catalyst to oversee the relations between organics and synthetics in the hopes to stop this infinite cycle and keep life preserved in the galaxy. After million years analyzing, the Catalyst came to the conclusion that organics create synthetics to improve their own existence and technology that allows them to travel across the space. To exceed those limits, synthetics must be allowed to evolve to surpass their creators, resulting in ultimate betrayal of an entire species. The final conclusion of the Catalyst is that to prevent such thing from happening synthetics must exterminate their creators so they can no longer reach their status as a technological advanced race and keep them as primitives and limited as much as possible.

The Catalyst then turned on its creators without a single warning, using its organic pawns to overthrow the Leviathans and use their bodies to use their liquids to construct the very first Reaper, the Harbinger that took form of the Leviathans. The memories of the Leviathans used to create Harbinger were preserved as the Reaper's gestalt consciousness, which in turn was incorporated into the Catalyst itself. As the first Reaper, Harbinger solely wiped out all life in the galaxy at its first harvest for countless million years, producing more Reapers on the process for thousands, if not millions of harvests every 50,000 years; the limit of waiting put by the Catalyst to let all civilizations rise from the ashes once the Reapers can once again harvest the galaxy for hundred years before returning to their slumber in the dark space (the dark space located outside of the galaxy).

It is the very first Reaper, like Sovereign from the first game, and is the controlling force behind the mysterious aliens known as the Collectors (who are actually indoctrinated and highly modified Protheans). It directly controls the Collector General, and during gameplay it can possess the body of any regular Collector, changing it from a normal grunt into a super-powered enemy with a damage absorbing barrier, enhanced durability, and the ability to fire biotic attacks and fireballs. Harbinger also expresses an interest in Commander Shepard, due to their victory over Sovereign, and often orders the Collectors to capture Shepard alive if possible. Harbinger's goal is to use the Collectors to kidnap humans and use them to create a Human-Reaper. At the end of the game, Shepard and friends destroy this monstrosity and destroy the Collector base (or alternatively, sterilize it and allow Cerberus to salvage its technology). Harbinger is then forced to lead the Reaper invasion manually by slowly travelling across the Galaxy towards civilization

In Mass Effect 3, Harbinger is still the leader of the Reapers but has a much smaller role, thus making him the Bigger Bad. It is leading the Reapers' invasion of Earth. Its only actual appearance is during the final mission, where it appears behind the beam to the Citadel and personally attacks what remains of Hammer strike force, though the Normandy manages to evacuate Shepard's critically injured squad. Harbinger fires a powerful laser beam at Shepard which severely injures them, but immediately assumes that the Commander is dead and leaves, allowing Shepard to get to the Citadel beam. Afterwards, Harbinger, along with all other Reapers, is either destroyed or helps to rebuild the galaxy depending on Shepard's final choice. 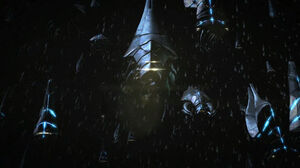 Harbinger with the Reaper Fleet. 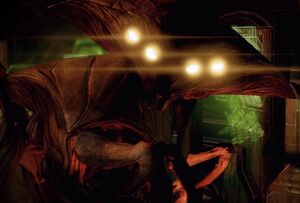 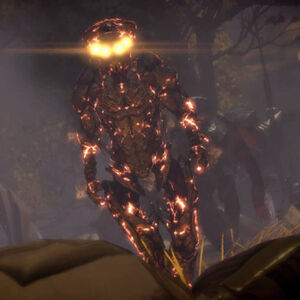 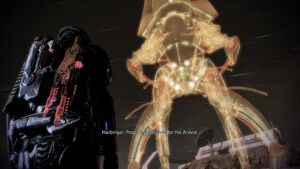 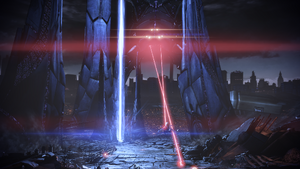 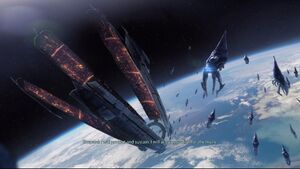