Hardgear is the main antagonist of the 2000 anime OVA Maetel Legend. He was a Metanoid scientist who was called by Queen Promethium and to come to La Metal and establish a trade and alliance between their worlds empires. However, Hardgear plans to takeover the planet La Metal and along with its kingdoms through mechanizing the population and controlling them. But unfortunately, as Hardgear's plans was coming together, his role as the big bad was taken by Promethium when he failed to assimilate her.

He was voiced by Takashi Matsuyama in the Japanese version and Dan Green in the English version of the anime.

He resembles a metal-skinned humanoid with a body with various shades of gray. He has dark metallic hair in a mullet way with standing upward and red lenses decorating near the top, the center one possessing a gauge. His eyes are blue lenses highlighted by a dark pink marks on his face and his chin. He seems to be an upside down spade emblem with a lens in the center on his chest. He also has red lens on his dark waists near the center front.

Hardgear was a loyalist, but manipulative scientist with a big ego. He first approaches the alien world with peace and harmony, only to scheme a takeover of the Metanoid Empire. He mechanize his helpers so later he can control them. Without having his plans wouldn't go to failure, Hardgear is willing to abduct and murder anyone who gets in his way.

When the artificial sun was starting to fading, Promethium had her husband, Dr. Ban, to start the experimental process of converting to Machine Bodies. Her daughters Maetel and Emeraldas were against this, even their father was against this, but Promethium was dead set on the course. Ban tried to use a more mental link with his wife and use his consciousness uploaded into nanomachines for Promethium's mechanization to convince her of other ways besides just mechanization.

But as the process went wrong due to robotic scientist Hardgear interfered, Promethium became a cold-hearted machine and using her last of her free will to sent her daughters away on the Galaxy Express train 999. When Hardgear tried to have Promethium integrated into him, the artificial queen was working against him and had Hardgear assimilated into her, becoming a evil tyrant forcibly promoting mechanization under the illusion of choice. 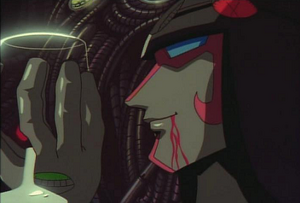 Hardgear drinking wine.
Add a photo to this gallery
Retrieved from "https://villains.fandom.com/wiki/Hardgear?oldid=3789964"
Community content is available under CC-BY-SA unless otherwise noted.