Force-Field manipulation via his left glove

Enigmatic Thrill-Seeker
Ian, better known as Hardlight, is an antagonist in Big Hero 6: The Series, He is a Krei Tech scientist and supervillain who is bent on defeating Big Hero 6.

He is voiced by Will Friedle, who also voiced Deadpool in the animated TV show Ultimate Spider-Man and Fang in the Teen Titans TV show.

Ian appears as a meek, clumsy scientist who feels under appreciated for his genius. He has trouble speaking up for himself.

As Hardlight, he's more confident, dramatic and theatrical. He treats everything and everyone as part of his own game, even civilians who get caught in the fight. Hardlight adores a strong challenge, and hopes to attract worthy adversaries to battle in the fights he appears in.

Little is known about his past, and how he got employed at Krei Tech, as well as his intentions as a supervillain, is currently unknown.

In the titular episode, he first appeared as Hiro’s opponent in a video game Hiro was playing; Hiro underestimated Hardlight's choice of a sword as a weapon, enabling Hardlight to effortlessly beat him, much to Hiro’s dismay. Later, at Krei Tech, Ian (Hardlight’s true identity) was seen being mistreated by Krei himself.

When members of Big Hero 6 were heading back home, Hardlight appeared and introduced himself. Chief Cruz sent the Buddy Guards to stop him, but Hardlight summoned enemies from Mind Smith II Turbo to shoot down the Buddy Guards. He did not see the team, so he threatened to steal the art museum‘s diamond the next night if the heroes didn't show up.

Later that night, when Big Hero 6 sneaked in the museum, Hardlight confronted the team and began to fight. During the fight, Cruz sent the Buddy Guards to fight them, but Hardlight snatched the diamond and kidnapped Cruz.

The next night at Market Square, he awaited Big Hero 6 at the top of the digital tower. When the team entered, he summoned the enemies and fought against the heroes once again. Hiro and Baymax fought Hardlight, but this time, Hiro tossed his glove to Chief Cruz, who then used the glove's magnetism to pull Hardlight's gauntlet and broke it, causing the tower to disappear. Before he could get arrested, he released a large light beam to escape.

At Krei Tech, Krei went to check on Ian, his scientist from earlier, about the force field technology. Ian sheepishly told him there had been some breakthroughs and setbacks. After Krei left, Ian put away a flash drive in a cabinet with the Hardlight helmet inside, revealing Ian was Hardlight. 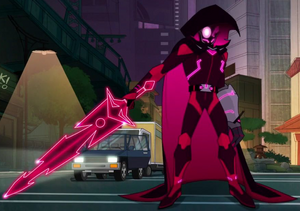