Captain of the Dyrenell Empire

Agent of the Ilian Church

Assist Morsayati with his goals

"Harle" is an antagonist in Dragalia Lost. Initially the captain of the Sol Alberius City Guard, Harle reveals himself as a treacherous person pledging his alliance towards Morsayati who possesses Zethia and the Dyrenell Empire as he becomes both of the jester and the servant who informs the heroes activities towards the evil empress herself. Being a follower of Morsayati, he has no compunctions to see Euden and his companions suffering for his own amusement.

He is eventually revealed to be a creation of the Progenitor modeled after the real Harle and goes by the name of Loki.

Harle can be described as a man with short brown hair while supporting a smug expression on his face. He wears a dark blue and purple jacket with a fur collar and also wielding a purple sword. He also mostly supports a bowed down gesture in an attempt to conceal his sadistic personality with his politeness. It is revealed that he is impersonating the actual Harle and having the same appearance.

Despite serving as the Captain of the Sol Alberius City Guard for so long, Harle is a man who has no compunctions to betray the Alberia Empire in order to pledge himself towards the Dyrenell Empire. He presents himself as a polite but yet laid-back person who always musing about some things but in reality, it conceals on how sadistic that Harle can be as it was stated by himself, he is a man who loves to sow the seeds of chaos everywhere he goes and loves to see people's suffering. Evidenced when he refuses to give the documents towards one of Euden's companions Elisanne just to see her suffer. This could be one of the contributions on why he supports Dyrenell Empire and being apathetic with Morsayati possessing Zethia. Despite seemingly devoted towards Empress Zethia, the latter was creeped out about it.

Harle appears in Chapter 2 alongside Euden's brother, Emile, who not so subtly betray Euden and pledge himself towards the Dyrenell Empire while tracking his whereabouts. Catching the heroes themselves, Harle, alongside Emile, then branded them as a traitor of the Dyrenell Empire because of the crimes Euden hasn't done such as kidnapping the Ilian Auspex, Zethia, or releasing the fiends and then proceeds to order the soldiers to arrest them.

Managing to run away, the heroes then found a nearby Sylvan Village, Woodhaven, that was in ruins. However, most of the people evacuate from the attack with the exception of a little Sylvan Girl, Sarisse. Attempting to evade the capture from Emile so that she won't talk about what happened to the rest of the Sylvans, the rest of the soldiers managed to capture her while Harle advises Emile to lock Sarisse in a cage.

Harle then reappears again after seeing Emile lost his pact with his dragon, Mercury, due to his condescending attitude while sneering about it and reminding Euden that Aurelius tried to kill all of the dragons, starting with the Flamewyrm in Mount Adolla. After this, both Emile and Harle then went to Mount Adolla to see what the king has done.

Returning in Chapter 3, Harle then watches the king trying to kill the flamewyrm in joy while cheering him to do so and when Zethia tries to tell that her brother will stop him, Harle snarkily insults her due to her bold words. When Zethia attempts to stop King Aurelius from killing the dragon, Harle then instantly prevents her to do so. As the heroes attempts to stop King Aurelius, Harle then taunts the heroes that as the flamewyrm is on her last breath, she will exterminate the heroes once and for all while ceremoniously retreats with the king.

Returning again in Chapter 5, as Morsayati successfully possess Zethia, Harle then follows her orders to issue a proclamation towards Grastaea that the king is dead and Zethia will become the new empress, fully transforming Alberia into a true tyrannical Dyrenell Empire. As the heroes manages to defeat Valyx and his soldiers, Harle then informs the Empress about it while musing that a measure had been taken to suppress the rebellion while some of Euden's siblings alreeady taken measures about it.

Returning in Chapter 7, he then mocked Emile in a sarcastic manner after the latter trying to joins Valyx army to destroy Euden once and for all with his bootheel while warning the Empress about how Euden has becoming increasingly dangerous and must be ridden immediately. As the heroes managed to form an alliance with St. Lotier to oppose the Empire, he then reported the Empress about what happened.

Returning again in Chapter 10, he then asked about the Empress condition and began to grew ecstatic after seeing her overjoy much to the Empress's disgust as the two then depart to to Clave Loy'elune, the largest binding ruin that seals Morsayati's main body while inviting several of Euden's siblings into the ruins.

Meeting again with the heroes, Harle then taunts them about how they will watches as the Empress will gain full strength after unsealing the main part of Morsayati's body which resulted on them getting surrounded by a powerful miasma. After the Empress successfully doing so and seeing Euden's resolve to free Zethia and save the world from Morsayati, Harle simply tells Euden whether he can fled the scene before talking about saving the world. As the heroes return to the Haildom in disappointment, Harle was digging several documents about Alberia's dark secret much to his entertainment.

During the Chapter 11 interlude, Harle then intentionally attacks a church with several believers inside it under the pretense that the church was attacked by the Perditionists in order to lure one of Euden's companions, Elisanne, out of the hiding. After successfully luring Elisanne, he then gives the documents about the dark secret regarding the Seventh Scion so that he could see Elisanne's suffering for his own amusement. As Elisanne attempts to force Harle to give the documents to her, Harle simply refuses and retreats from the scene.

It was soon revealed that the documents he had possessed contains the conversation with Aurelius and someone known as Finlorda that the real Euden died 10 months after his birth due to the wyrmscale disease and as a result, the king had no choice but to adopt someone to replace the Euden that died. According to Elisanne, this secret would rather defame Aurelius's nature as a fair king and she then began to doubt if this documents were truly forged at all.

Returning again in Chapter 13's interlude, Harle then engages a meeting in a burned church with one of the Agito known as Ciella, who is also a former paladyn, as he gave several documents towards her about Euden's true origin while revealing himself being a man who enjoy sowing the seeds of chaos everywhere he goes and after the conversation, Harle then retreats and simply watches the drama that will unfolds in the capital city as the heroes march to there.

The "Agents of the Goddess" event reveals Harle to be working for Graht and Basileus in their efforts to revive demons. "Divine Deception" further reveals that "Harle" isn't his real name. When Madame attempts to reveal Harle's real name though, she dies of a heart attack. It is unknown what the cause was whether it was the work of Harle or the strain of the transformation she underwent from the sealing stone.

Chapter 18 shows that Harle isn't loyal to Graht either. When Graht send him in the same direction as the halidom party to collect the Dawnshard for him, Emile expresses intent on keeping it to himself.

Come "Faith Forsaken", it is revealed that Harle isn't actually Harle at all, but a demon by the name of Loki who banished the real Harle to another dimension and stole his identity to commit atrocities. He proved to be so good at impersonating Harle that when Nevin meets him after having met the real deal, he admits that he can't tell the difference.

Eventually, Loki finds himself bested by Harle who gets revenge against Loki for sending him to another dimension by doing the same to him. 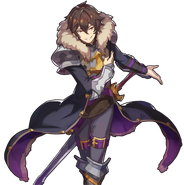 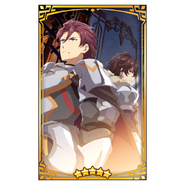 Harle in the "Worthy Rivals" wyrmprint. 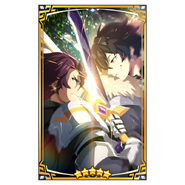 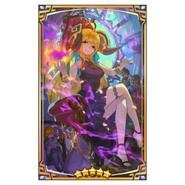