Surprising strength and stamina, superior gymnastic skills, skilled psychologist (formerly), injected with a drug by Poison Ivy in the comics that makes her immune to most poisons

Loving the Joker and caring for him, causing havoc and having fun

To keep Mr. J (The Joker) very happy no matter what, Take over Gotham City alongside the Joker

Dr. Harleen Frances Quinzel (a.k.a. Harley Quinn) is a villainess from the Batman series and one of the many villains of DC Comics. She is the Joker's self-proclaimed girlfriend and henchgirl. She was created by Paul Dini and first appeared in his Batman cartoon. According to the comic book canon she was interning at Arkham Asylum as a psychologist when she met the Joker. She got overly fixated on him, and started believing she loved the Joker. She does whatever she has to do to achieve the Joker's approval. She also allies herself frequently with Poison Ivy. Depending on the writer and story, Joker either doesn't love her and just manipulates her into doing what he says or he can love her but is just very abusive.

She first appeared in Paul Dini's Batman: The Animated Series. From there, her character was included in The New Batman Adventures and into the DC Comics. as what was originally supposed to be the animated equivalent of a walk-on role; a number of police officers were to be taken hostage by someone jumping out of a cake, and it was decided that to have the Joker do so himself would be too bizarre (although he ended up doing so anyway). Dini thus created a female sidekick for the Joker. Arleen Sorkin, a former star of the soap opera Days of our Lives, appeared in a dream sequence on that series in which she wore a jester costume; Dini used this scene as an inspiration for Quinn. Having been friends with Sorkin since college, he incorporated aspects of her personality into the character.

The 1994 graphic novel Mad Love recounts the character's origin. Told in the style and continuity of Batman: The Animated Series and written and drawn by Dini and Timm, the comic book describes Harley as an Arkham Asylum psychiatrist who falls for the Joker and becomes his accomplice and on-off sidekick/lover.

In High School, her gymnastic skills won her a scholarship to the local university where she studied criminal psychology. Though her grades were poor, she seduced her professor into passing her with top grades. She quickly applied for an internship at Arkham, hoping to write a successful book about her experience and get her own TV show.

At Arkham, she becomes fascinated with the Joker. He flirts with her, even leaving a flower on her desk. Harley volunteers to analyze him. She falls hopelessly in love nearly instantly with the Joker during their sessions when he tells her false stories about a traumatic childood, and she helps him escape from the asylum more than once. When the Joker is returned to Arkham after a battle with Batman, the sight of her badly injured patient drives Harley to don the costume and become Harley Quinn, the Joker's sidekick and on/off girlfriend. She later becomes fast friends with Poison Ivy, who injects her with antitoxins to give her the same immunity to poisons she has (which explains why she is not affected whenever the Joker releases his lethal laughing gas).

In the movie Batman Beyond: Return of the Joker, it is revealed that she disappeared after falling down an open shaft in the Joker's final fight with Batman and was never found.  At the end, however, she appears as an old woman whose two granddaughters, both named Dee-Dee, are working in the resurrected Joker's gang.  They are released into Harley's custody, and she furiously berates them for their actions, hinting that she did eventually give up crime, even if she couldn't stop her granddaughters from following in her criminal footsteps.

Harley Quinn serves as the secondary antagonist in the video game Batman: Arkham Asylum. She was the only villain who knew what Joker was planning, and she also knew the location of the secret laboratory. The player spends a pretty long time in the game chasing her, because she took off with Commissioner Gordon. When the Batman finally catches up to her, he knocks her out. However, thanks to the interference of Bane, she manages to escape. Later in the game, she is locked up in one of the cells in the high security block by Batman, but not before she released Poison Ivy from her cell.

An Arkham Asylum psychiatrist assigned to treat The Joker, Dr. Harleen Quinzel instead became obsessively fixated on her patient, believing herself to be in love with him. She helped him escape confinement and took on her own criminal identity as Harley Quinn. Quinn is a violent and unpredictable felon whose only motivation, beyond general mayhem, is achieving The Joker`s approval. Because of his cruel and mercurial nature, this in some ways makes her just another of his victims, albeit a very dangerous one.

Harley Quinn has taken over many of the duties of leading the Joker's gang due to his illness and is more vicious and deadly than previously because of her anger regarding the Joker's health. Harley even supervised the kidnapping of Nora Fries, wife of Mr. Freeze. Shortly after Batman rescues Catwoman from Two-Face, Harley launches an attack on the Arkham CityMedical Center and kidnaps one of the doctors, taking her to Joker's Funland in the old Sionis Industries compound, and also implies that the last doctor got executed for failure to find a cure. When Batman comes for her, Harley is watching over the doctor she kidnapped nearly be executed by Mr. Hammer for failure, until she declares a change of plans and has them execute the medic via the roller coaster. When Batman revealed himself and defeated her gang, she scolds Batman and later disappears into Joker's private office, sealing it behind her, although she also encounters Clayface-Joker and briefly mistakes him for the actual Joker before realizing her mistake, causing Joker to hush her. When Batman arrives, Harley is crying over the dead body of the Joker only to reveal that it was a trap and attacks Batman alongside Joker.

Batman finds Harley tied-up and infected with the same poison that is killing Joker, Harley keeps an eye on the Dark Knight as he tries to save Mr. Freeze from Penguin. After his rescue and the creation of a cure, Harley steals it and returns it to the Joker. The Joker, feeling revitalized, starts acting like his old self again and resumes his love hate relationship with Harley. While pursuing Joker to retrieve the cure, Batman finds Harley tied up outside of Joker's office. Batman leaves her and continues after Joker. In actuality, she wasn't able to deliver the

cure to the Joker, as Talia al Ghul had intercepted her and stolen it, as well as tying her up outside Joker's office before she could get the chance to deliver it.

Harley was present outside the Monarch Theatre as Batman carried the lifeless body of the Joker out of it and out of Arkham City. She gasped and dropped to her knees sobbing uncontrollably at the sight. It is implied by guards that she has taken over Joker's operations; nonetheless, her position is tenuous as many believe she would not last without the Joker's support and many members voice desires to defect from the gang or usurp her (some gang members even voice plans to rape her, implying her life is in greater danger then she realizes).

Weeks after the horrific events of Arkham City, Harley Quinn reunites Joker's former gang after escaping from a psychiatric ward that was meant for her temporary imprisonment until Arkham Asylum was reopened. Returning to the condemned site of the former mega prison, Harley took the Industrial District under her control and redesigned the Steel Mill, the Joker's former base of operations, into a mourning ground as she concocted her ultimate plan for revenge. When Commissioner Gordon and the GCPD arrived, the district was in lockdown and Harley kidnapped several officers officers and dragged them to the mill as part of a trap for Batman.

When the Dark Knight arrived and rescued two of the officers, Harley wounded Batman and locked him in an air-tight glass ball in a giant memorial for her beloved. Two days later, Robin arrived and began making his way at the docks and finds Batman's utility belt. Traveling deeper into the docks, Robin eventually comes face-to-face with Batman in the giant Joker shrine, and fights Harley and her henchmen to retrieve her key card to unlocking the ball keeping Batman captive. Returning to the shrine, Harley unleashes a Titan-enhanced thug on Robin, who defeats it and frees the Caped Crusader. Harley then activates the next step in her plan; rigging the area with GCPD-stolen bombs, forcing Batman to hunt them down while Robin rescues the other police officers.

Realizing she's close to defeat, Harley calls Batman back to the shrine where her final plan begins- activating the Wonder City mechanical guardians (stolen by the Joker during Protocol Ten) and watching from the ten-foot Joker structure the fight ensuing. Destroying the robots, the Dark Knight then heads for Harley, who, in her last, final step of revenge activates the bomb hidden in the Joker structure, planning to kill both Batman, Robin and even herself, to reunite her with her beloved.

Batman is able to get Quinn and himself to safety, but soon fears that Robin was caught in the explosion. Harley relishes in Batman's anguish and moves to stab him in the heart to finish her revenge, only to be knocked out cold by one of Robin's projectiles as the young hero reveals himself to be alive and well. Harley Quinn is once again arrested by Gordon while Batman leaves, still scarred from Talia and Joker's death, but Robin assures Gordon that Batman will be fine. With Harley's plans ruined, her gang is rounded up by the Gotham Police and Arkham City is finally, officially shut down for good.

In the alternate future Harley assisted The Joker during the climatic battle between the Justice League and the Society. She was killed after she used her body to shield The Joker from an explosion caused by a combination of Black Adam, The Flash, and Green Lantern's powers. She appears to have killed or assisted in killing Robin sometime prior to this, as she is seen wearing his tattered cape.

Harley Quinn before and after her corruption.

Harley Quinn in The Batman. 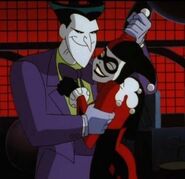 Harley with The Joker.

Harley Quinn with a huge mallet.

An artwork of Harley Quinn in her doctor uniform in Batman: Arkham Asylum.

Harley Quinn in Batman: The Brave And The Bold

Harley as she appears in Injustice: Gods Among Us. 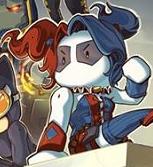 Harley and the Joker, as depicted on the cover of Batman: Harley Quinn.

Harley as the psychiatrist in Batman Series

Harley and The Joker

Harley in Batman Beyond from the past

Retrieved from "https://villains.fandom.com/wiki/Harley_Quinn?oldid=1174109"
Community content is available under CC-BY-SA unless otherwise noted.