Build a successful life and solo career without the Joker.

Dr. Harleen Quinzel, also known as Harley Quinn, is a minor antagonist in Justice League: The Flashpoint Paradox, one of the main characters in the 2018 animated film Suicide Squad: Hell to Pay, a supporting antagonist in Batman: Hush, and a supporting character in Justice League Dark: Apokolips War. She is a former psychiatrist turned girlfriend to The Joker. At some point, she was apprehended and placed in the Suicide Squad.

In the Flashpoint timeline, Harley Quinn goes under the persona, "Yo-Yo" and uses weaponized yo-yo's. At some point, she started working for the Joker and helped her kidnap Judge Dent. Batman then proceeded to chase her down on the rooftops of Gotham City, where the two then started to fight. After Batman subdued her, he then proceeded to question her on where the whereabouts are of the Joker. When Yo-Yo revealed that she did not know the location of the Joker or Judge Dent, Batman threw her off the roof. Before hitting the pavement, she was saved by Cyborg.

In Gotham City, Professor Pyg is kidnapped by Scandal Savage and Knockout for a "patient in need of medical attention". Amanda Waller is diagnosed with a terminal illness and reassembles Task Force X in an attempt to save her soul, and adds Harley to the new roster: Deadshot, Captain Boomerang, Killer Frost, Copperhead, and Bronze Tiger. Their mission: to find a man named Steel Maxum and retrieve a mystical black card emblazoned "Get Out of Hell Free." Finding Maxum in a male strip club, Task Force X is interrupted by Eobard Thawne, Silver Banshee, and Blockbuster, who appears to want the card for themselves. The squad escapes with Maxum and learn he was Doctor Fate. He explains that the card allows the user to bypass Hell and gain access to Heaven, but it can only be used once. Scandal Savage and Knockout stole the card from the Tower of Fate, which resulted in Maxum being stripped of his title by Nabu.

Upon finding Scandal and Knockout's apartment, the team acquires the card, but they are intercepted by Vandal Savage and his men. Savage retrieves the card but leaves the wounded Knockout to die despite Scandal's pleas. As Savage escapes, Zoom places a tracer on his ship. In the next day, Zoom's henchmen kidnap Frost at a gas station. Zoom removes Frost's bomb and convinces her to join him. Zoom lures the Squad into a trap and detonates the bomb. They manage to escape, but Tiger is heavily injured in the blast.

Scandal covertly informs Deadshot of Vandal's location, and the Squad infiltrates his lair but are captured. Savage reveals that he had Pyg surgically implant the card into his chest cavity. Zoom and his henchmen attack and remove the card from Savage's body, killing him. However, Zoom explains that he was killed by Batman in another timeline, but managed to stay alive by calling on the Speed Force. Frost double-crosses Zoom, killing Silver Banshee and Blockbuster and stealing the card for ransom. Copperhead fights Frost until Waller detonates his bomb and kills both of them. Captain Boomerang attempts to steal the card but is incapacitated by Zoom. Tiger battles Zoom, but Zoom slices him multiple times with a small dagger. Tiger, dying from blood loss, uses the last of his strength to cut the card from Zoom's fingers. Deadshot kills Zoom and gives the card to Tiger, who dies and ascends to Heaven. With only Captain Boomerang and Harley Quinn remaining alive in his team, Deadshot gives the now-useless card to the unsuspecting Waller before leaving.

Two years after the Justice League's failed invasion of Apokolips, Harley is seen on Stryker's Island in Metropolis, now the leader of the Suicide Squad which was led by Amanda Waller before her death due to cancer. Harley is seen in a boxing match with Lois Lane, attempting to win her over to their side. Despite her use of electrical gauntlets, she is defeated by Lois Lane, and decides to keep her end of the deal, declaring that Earth will be reclaimed. Harley then reveals that due to Batman, Joker had also died shortly after Waller. Harley, along with the rest of her team, join the remaining Justice League's efforts in destroying Apokolips, accompanying them to LexCorp to fight their way to the boom tube.

After fighting through many of LexCorp's soldiers, the Suicide Squad, along with Lex Luthor and Lois Lane, remain by the boom tube as the remaining League members head to Apokolips, in order to prevent the Parademons from returning to Apokolips. To fight off the Paradooms, genetic hybrids of Parademons and Doomsday, Harley is given new guns infused with Kryptonite ammunition, as the Parademons are vulnerable to Kryptonite due to possessing Superman's DNA.

When the Suicide Squad is vastly outnumbered by the Paradooms, Luthor erects a barrier made of Kryptonite around the group as he triggers LexCorp's self-destruct sequence. Eventually, the barrier is broken, and the remaining members of the Suicide Squad, along with Lane, are killed as the building self-destructs, also killing the surrounding Paradooms, but not before Harley gleefully continues to shoot at the enemies around her and expresses her excitement in reuniting with Joker. 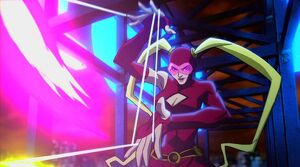 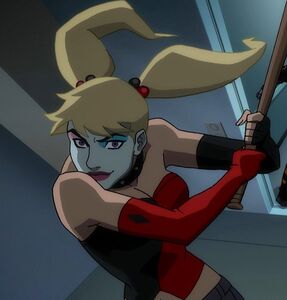