Villains Wiki
Register
Don't have an account?
Sign In
Advertisement
in: Articles under construction, Article stubs, Outdated Articles,
and 67 more

Hanging out with Barbara.

Harleen Quinzel (also known as Harley Quinn) is one of the six recurring antagonists in the second generation of the DC Super Hero Girls franchise. She is a student at Metropolis High School, a member of the Super Villain Girls and is also Barbara Gordon's best friend and Batgirl's (former) archenemy.

She is voiced by Tara Strong, who voiced Cheetah, Ursa and She-Bat in the same series.

Harleen Quinzel is a mischievous, eccentric and extravagant girl who likes doing jokes and pranks. She can kind of insufferable, for example, when the other Super Hero Girls and Super Villains Girls met her. As Harley Quinn, she's an deranged trickster who commits crimes with a sadistic glee and hyperactive energy. Despite her nasty attitude, alongside her bestie, Babs, she's loyal, caring, affectionate and kind; they had been best friends since second grade, and despite her villain double-life, she genuinely loves and cares for her. 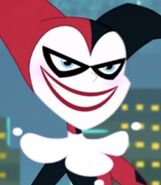 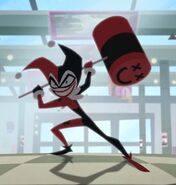