Obtaining the Sword of Beowulf (suceeded).

Harm is a villain in the animated TV series Young Justice, appearing as the main antagonist of the eighteenth episode, "Secrets".

He's voiced by Benjamin Diskin, who also voiced Venom in The Spectacular Spider-Man and Morbius in Ultimate Spider-Man, The Leader in Marvel Future Avengers, Rhino in Marvel Heroes and Diaz Arnesto in The Prodigies.

Harm is a ruthless, sadistic, cunning, hateful, and overall evil character. Harm has shown a great desire for power, going so far as to kill his only family in order to gain that power and literally becoming pure to wield the Sword of Beowulf. When under a spell that enhanced his malicious nature and allowed him to wield the sword, he speaks in a superior, third-person tone, seeking anyone who would give him a good challenge, admonishing his opponents for their lack of focus and inferior abilities compared to his own and referring to them with objective pronouns.

But deep down, he feels remorse for what he did to his own sister. When her ghost came back to confront him, Harm tried to deny his guilt, quickly losing the intimidating demeanor he attempted to maintain.

Upon murdering his sister and gaining his "pure heart", Harm became a powerful combatant who can easily overpower even the highly skilled Artemis. He also has superior stealth skills, as shown when he remained unnoticed in the museum after stealing the Sword of Beowulf. After losing his "heart", his combat skills dropped dramatically.

Being "pure of heart", Harm was able to wield the Sword of Beowulf, which can fire powerful and potentially energy strikes, but then lost control of it after losing his "pure heart". He also wields a dagger which he used to kill Greta.

At the beginning of the episode, Harm breaks into a museum in New York City and steals the Sword of Beowulf. As he still needs the incantation to use it, he remains in the museum, hiding and waiting until the police arrive. When the museum director speaks to the police, telling them about the sword and the incantation, Harm listens. With the learnt words, he activates the sword and slaughters the policemen. After killing them he regards his deed as unsatisfying and states that he and the sword will need a bigger challenge. He then approaches the frightened director who staggers back, shocked that Harm was able to wield the sword which is said to be only available to those pure of heart. Harm confirms that the wielders heart must be pure, but adds that this doesn't necessarily means pure good. He then finishes off the director and escapes.

On Halloween, he witnesses Artemis and Zatanna taking down thugs and robbers. Witnessing their fighting abilities, Harm decides that they will prove a challenge and blows up their bikes when they return. The girls are thrown to the floor but jump back up to fight him. Zatanna attempts to use her magic to disarm Harm but the Sword proves to be resistant. Harm claims that he will closely study their methods in order to be able to kill their masters. The two girls escape by aid of a mysterious girl and climb a rooftop only for Harm to pursue and confront them. Zatanna freezes Harm but he breaks free by help of his sword. He then hunts Artemis and Zatanna over the rooftops. With a throwing knife, he manages to slash the string of Artemis' bow, causing her to draw a small crossbow. When she aims it at Harm's head, challenging him to a fight without 'toys', Harm sheathes his sword and removes his west. He then attacks Artemis in hand-to hand-combat, easily dodging her blows. Harm observes that Artemis is fighting inner demons as well as Harm and is thus unable to defeat him. When Zatanna attempts to take the sword, she is shocked due to her impure heart. Artemis and Zatanna flee once more, again being led by the girl. Coincidentally, they end up on the roof of Harm's very house which enrages him. With his sword, he electrifies the two and knocks them out.

He ties both of them up but puts each of them in a different room. He has Artemis watch footage of Zatanna being threatened by a crossbow aimed at her head. Harm demands to know how Artemis found out about his home, threatening to kill Zatanna should Artemis not talk. Artemis, believing that the mysterious girl was an ally of Harm, tells him to ask the girl. Harm is unaware of any girl and tells her that he works alone. Meanwhile, Artemis sees on the screen how the girl frees Zatanna. Harm eventually sees Zatanna freed and rushes towards the other room. Artemis uses this advantage to save herself. The two manage to lure their pursuer into the kitchen where they activate the gas oven. Before leaving the room, Artemis shoots an arrow at Harm who easily catches it. However, the arrow is shown to be a fire arrow and upon activation, ignites the gas and creates a giant explosion.

Artemis and Zatanna manage to escape the blast and find a small grave in the garden. The little girl stands near it and is revealed to be the ghost of Harm's little sister who was killed by him. Before they can really understand the situation, the two are attacked by Harm once more. He accuses them of defiling his sanctuary and they accuse him of killing his sister. He reveals that his sister Greta was the only thing he ever loved and that he had to kill her in order to become 'pure'. The ghost of Greta then approaches Harm and rips the 'purity' out of his heart, therefore making him unworthy of using the sword. He tries to attack Artemis without it, only to be immediately defeated. Once Harm is defeated, Greta's ghost returns to her grave. 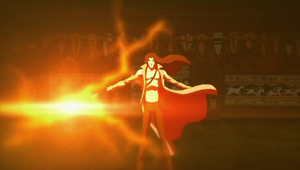 Harm draws the Sword of Beowulf 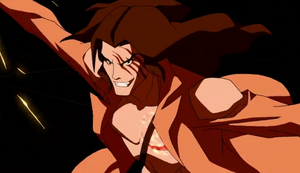 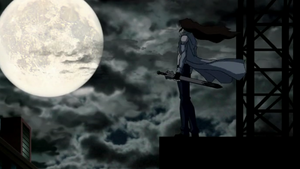 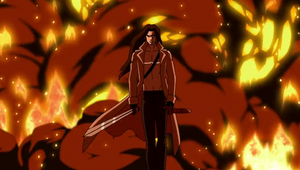 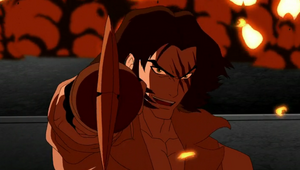 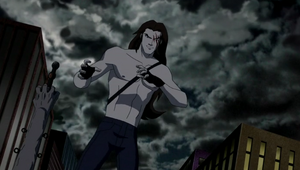