Get revenge on Susan Jeremy and remove her heart.

Dr. Harold "Harry" Rusk is the main antagonist of the 1981 Valentine's Day-themed slasher film X-Ray which is also known as Hospital Massacre.

In 1961, a young Harold left a Valentine's card at Susan Jeremy's door. Upon opening it and realizing it's from Harold, Susan voices her disgust. Harold watches through the window as she and another boy named David ridicule him and rip up his card. While Susan goes in the kitchen to get a piece of cake, Harold sneaks in through the window and murders David. Susan returns from the kitchen and sees David's body hanging from the coat rack and a smiling Harold at her window. As Susan screamed in horror, Harold ran away.

Years later, Harold has become a doctor at a hospital that Susan Jeremy goes to. On Valentine's Day, Susan comes for a follow-up check up, and Harold is determined to take revenge. He first traps her in the elevator, by shutting off the elevator's power switch. During the time she's trapped in the elevator, Harold lures Jacobs, Susan's doctor, to the ninth floor and kills her, hiding her body in a locker. Afterwards, he replaces Susan's medical folder with a forged one and starts up the elevator again. When Susan arrives at the office where Harold is, Harold hides in a closet until she leaves. When a janitor finds Jacobs' body, Harold kills him by shoving his face into a sink full of acid.

When Suzy, one of the nurses, finishes typing Susan's cancer test report, Harold stabs and kills her before taking the report out of the typewriter and puts another in its place. This new report is found by Doctors Saxon and Beam, who believe it to be a "death warrant" for Susan. Meanwhile, Harold kills Dr. Nancy by snapping her neck after she finds Suzy's body to cover his tracks. He then kills Jack, Susan's boyfriend, with an electric saw after tricking him into an empty room. Harold then severs Jack's head and takes it to Susan in a big red box to send a message.

When a terrified Susan goes to warn the others about a loose killer, Harold starts searching for her, during which he kills Dr. Saxon with a hatchet, Nurse Dora with a syringe and Dr. Beam with a surgical blade. Harold then takes a screaming Susan, whom the other doctors had found and strapped to a wheel bed after disbelieving her, to an operating room where Susan pulls off his surgical mask (which Harold had been wearing to hide his identity) and recognizes him as "Harry". Harold corrects her with his real name and when Susan asks what he wants, Harold states that all he wants is "her heart", implying that he is going to literally - and painfully - tear her heart out. But before he can, several old ladies enter and unknowingly distract Harold long enough for Susan to stab him with a scalpel and escape.

Harold chases her to another room where Susan manages to cover him with a flammable liquid before fleeing to the hospital roof. Harold follows her and she attacks and beats him down with a pipe but Harold still won't give up. When he tries to pin her down and stab her with his blade, Susan sets him on fire with her lighter, sending the murderous Harold screaming in pain, leaping off the roof and falling all the way down to his death. 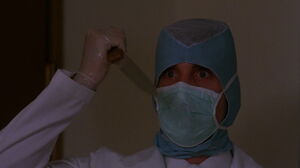 Harold in his doctor disguise. 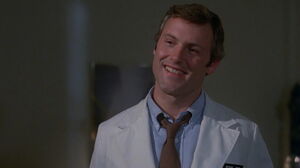 Harold out of disguise. 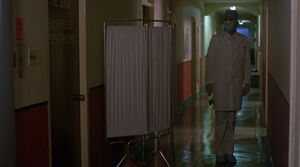 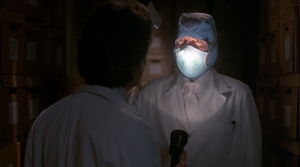 Harold ambushing Dr. Saxon.
Add a photo to this gallery

Retrieved from "https://villains.fandom.com/wiki/Harold_Rusk?oldid=3743183"
Community content is available under CC-BY-SA unless otherwise noted.