Scary Stories to Tell in the Dark

Skinning people alive
Turn someone into scarecrow (in the movie).

Get revenge on the two farmers (succeeded with one).

Kill Tommy turning him into a scarecrow (succeeded).

Harold (also known as Harold the Scarecrow) is an evil scarecrow and the titular character from the Scary Stories to Tell in the Dark short story of the same name.

He was portrayed by Mark Steger (who also played as The Pale Lady) in the 2019 film Scary Stories to Tell in the Dark.

Harold's is an obese scarecrow with long hair and his face and body are covered with stitches. Harold's clothing consists of a chessboard patterned long-sleeve button-up shirt and jeans. In the film, there is a rope tied around Harold's neck. When on his post, Harold's legs are stretched horizontally and his body slanted left.

Harold was made out of old sacs stuffed with straw by two stupid cow farmers named Thomas and Alfred who were bored and named him after another farmer they both hated. They treated the doll meanly for fun, and one day they heard it grunt, and Thomas suggested throwing him in the fire, but Alfred insisted it was nothing to worry about. Then, they noticed that Harold was growing bigger, and told themselves that it was their imagination from being in the mountains too long.

Then one day, Harold comes to life, walks out of the hut in front of Thomas and Alfred, then climbs on the roof and starts stomping around on it. Terrified, Thomas and Alfred leave with their cows that same day to get away from Harold, but then they realize they forgot their milking stools and have to go back. The farmers convince each other that there really is nothing to be afraid of and draw straws to see who will go back. It is Thomas who has to go back to where Harold is, and he tells Alfred that he will catch up with him later. When he does not return, Alfred looks back and sees Harold on the roof of the hut holding out Thomas' skinned corpse; the scarecrow had flayed Thomas alive.

Harold plays as a secondary antagonist in the film. During the film's opening, Harold is shown beaten by a high school student named Tommy. Tommy beats Harold with a baseball bat, throws empty beer bottles at him, and curses at him. On Halloween night, after Tommy returns home drunk, he's sent to out by his mother into the cornfield to do some work. Before attending to his work, Tommy passes by Harold and beats him once more exclaiming "Eat shit, Harold." Afterward, Tommy begins to feel paranoid and thinks Harold might be following him, to which Harold begins to chase after Tommy. While being chased, Tommy uses a pitchfork to stab Harold through the abdomen. Unfazed, Harold pulls the pitchfork out of his body and, as Tommy tries to run again, stabs Tommy through the back with it, turning Tommy into a scarecrow. 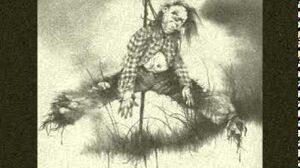 Scary Stories To Tell In The Dark 3 Harold