Haroud is Abis Mal's one and the only minion, reluctantly following his bumbling master through the desert, aiding in his schemes and trying to keep him from doing anything too stupid. Needless to say, it is a full-time job.

He was voiced by the late James Avery.

Haroud is contemptuous, sarcastic, cynical, and far more intelligent than his boss. He can be very lazy and underactive, so he seems to execute actions and plans with little effort (such as tricking Abis Mal into doing the things he just ordered Haroud to do). Yet despite his seemingly hatred of his boss, he follows his every order and takes part in nearly all of his schemes. He poses a far greater threat on Aladdin and friends being that he is cunning and actually uses his slight physical strength.

He can also be very manipulative and deceitful, especially towards his boss. He tricked Abis Mal several times into doing his chores (mostly physical work). Since Abis Mal always wants something he often says something along the lines of "Yes! I shall have the glory of touching the gold first" considering the gold is being dangerously guarded. This makes Abis Mal jealous; having him go through the traps instead of Haroud.

Haroud also has a habit - more like a career - of finishing Abis Mal's sentences and filling the holes to his plans. More often than ever, Haroud will be off to the side as Abis Mal is being subjected to pain or humiliating defeats. EX: "The Day The Bird Stood Still."

If the right opportunity presents itself, Haroud will take it to turn against Abis Mal, such as during "Forget Me Lots", when he allows Jasmine (who lost her memory and whom they tricked into serving them) to overthrow his boss while he chooses to serve her instead. 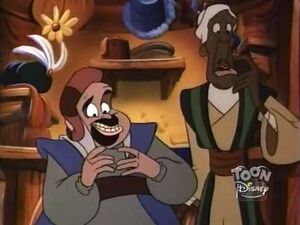 Retrieved from "https://villains.fandom.com/wiki/Haroud_Hazi_Bin?oldid=3984872"
Community content is available under CC-BY-SA unless otherwise noted.