Black Harren
King Harren I
Ghost of Harrenhal
His Grace

King of the Isles and the Rivers

Ruling with cruelty and fear.

Rule the Iron Islands and the Riverlands with an iron fist.

King Harren Hoare, also known as Harren the Black or Black Harren, is an historical character from A Song of Ice and Fire, being already dead during the events of the series. He was the last King of the Isles and the Rivers to rule over the Iron Islands and the riverlands, and the last ruling member of House Hoare, an ironborn family from Orkmont, one of the Iron Islands. He was the son of King Halleck Hoare and the grandson of King Harwyn "Hardhand" Hoare, a King of the Iron Islands who had conquered the Riverlands from the Durrandons. Harren's brother became Lord Commander of the Night's Watch, holding this position at the time of Harren's death. Harren is best known for being the one who completed the grand castle of Harrenhal.

Harren Hoare was born to House Hoare, a noble house from Orkmont who's past members also built Hoare Castle at Great Wyk. By the time Harren was born, the seat of the Hoares was Fairmarket, a town of the riverlands. Harren was the grandson of King Harwyn Hardhand, who extended the ironborn rule over the riverlands from the Neck to the Blackwater Rush, and the son of King Halleck Hoare. Harren's brother rose to become Lord Commander Hoare, leader of the Night's Watch.

Harren the Black was a vain, bloody tyrant, his cruelty being famed through the Seven Kingdoms. Though Ironborn, he returned to the Iron Islands infrequently. His father ruled from a modest tower keep at Fairmarket, but Harren desired a grander seat. He spent most of his reign constructing Harrenhal, the largest castle in Westeros. The Riverlands and Iron Islands were beggared to build the castle and thousands died in the process of building it. The day Harrenhal was completed Aegon the Conqueror landed in Westeros to begin his conquest of the Seven Kingdoms. The Storm King Argilac "the Arrogant" Durrandon had been so wary of Harren he had tried to make an alliance with Aegon to protect his weakening Kingdom, but he and Aegon were unable to reach terms.

Aegon was victorious over Harren's men in the Battle of the Reeds, but two of Harren's sons were victorious at the Wailing Willows. While they were returning to Harrenhal across the Gods Eye, however, the sons were killed by Aegon's dragon, Balerion. As Aegon's forces advanced, they were joined by the Riverlords, who hated Harren's tyranny. They were led by Lord Edmyn Tully, who had been summoned to defend Harrenhal. Aegon was also joined by the Blackwoods, Mallisters, Vances, Brackens, Pipers, Freys, and Strongs. Harren took refuge in Harrenhal.

Harren met Aegon outside Harrenhal to negotiate. Aegon said if Harren yielded he could remain Lord of the Iron Islands. Harren refused, confident his castle could withstand a siege and Aegon's dragons, to which Aegon told him "When the sun sets, your line shall end", at which Harren spat and returned to the castle.

Harren armed his men, promising lands and riches to whichever brought the dragon down. He said if he had a daughter he would give them to the dragonslayer, but he would give them one of Tully's daughters, or all three, or Blackwood's, or Strong's, or any girl of the Trident. However that night Aegon flew Balaerion up into the clouds, then descended inside Harrenhal and set the place alight. Harren ended, as did House Hoare. The next day Aegon accepted the fealty of the Riverlords and named Edmyn Tully Lord Paramount of the Trident.

On Harren's death there was conflict in the Iron Islands. Qhorin Volmark, who was descended from Harwyn's sister, tried to claim rule, but Aegon allowed the Ironborn to choose their own ruler, and they chose Vickon Greyjoy.

Harrenhal is rumored to be cursed, with a history of tragedy there. Quenton Qoherys, Master-at-arms of Dragonstone, was made Lord of Harrenhal and married one of Lord Tully's daughters. However House Qoherys ended with Quenton's grandson Gargon the Guest, known as this due to him visiting many weddings to practice the right of first night. A postern gate was opened by the father of a girl Gargon deflowered to Harren the Red, who claimed to be a grandson of Harren the Black. He gelded Gargon and left him to die in the Castle Godswood. Many more Houses were granted Harrenhal but have become extinct. The ghosts of Black Harren and his sons are said to wander Harrenhal, and set alight those who see them. 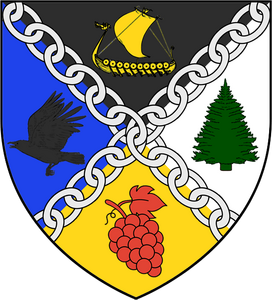 The sigil of House Hoare.
Add a photo to this gallery

Retrieved from "https://villains.fandom.com/wiki/Harren_Hoare?oldid=3304817"
Community content is available under CC-BY-SA unless otherwise noted.