Pyrotechnics of the Broodals

Harriet (ハリエット) is a boss and a member of the Broodals in Super Mario Odyssey. She is the only female member of them, and she functions as the Pyrotechnics. Harriet is fought in the Sand Kingdom, Bowser's Kingdom and the Dark Side.

She was voiced by Yuki Kodaira.

Harriet is the only female member of the Broodals, she wears a purple dress, gloves and pumps, and a little spiky hat with a bow with it, and in battle she uses a sunbonnet-like metallic helmet instead and has long blonde hair tied into a fishtail braid, two fishtail braids in the second and third battles. She somewhat resembles Wendy O. Koopa.

Dark Side brochure says that Harriet is not as predictable as the other Broodals are, she masters in pyrokinesis, and she acts very feminine. She is also known to be devious because she is reckless filling her hair with explosives, her bio says that those bombs are "homemade".

Harriet traveled the whole world with the other Broodals to steal precious things and helped Bowser prepare his forced wedding with Princess Peach in Super Mario Odyssey. Harriet is a boss in Sand Kingdom and Bowser's Kingdom, and her final fight is in Dark Side.

In battle, she attacks by throwing bombs with her hair braids (so having only one braid in her first battle, she will only throw one at once, being able to throw two at the same time by having two braids in the second and third battle), also spinning like umbrella with slightly bigger bombs (also in her braids) and then stamping them with force on the ground in an attempt to crush the player. Anywhere a bomb explodes, it leaves a small fire pit on the ground. To defeat her, Mario must throw Cappy to the bombs she throws to return them to her (because when attacking her directly, she protects herself with her metallic helmet), so her helmet gets destroyed and Hariet becomes vulnerable to Mario's jumps. When stomped on, Harriet hides in her helmet and starts flying in figure patterns like an UFO while dropping bombs for about 10 seconds while laughing maniacally before repeating her previous strategy (though deflecting these bombs will make Harriet to fall to the ground earlier). Stomping on her three times in the same way will defeat her. 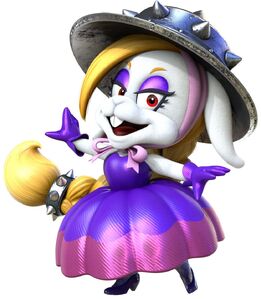 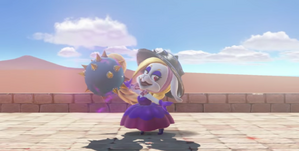 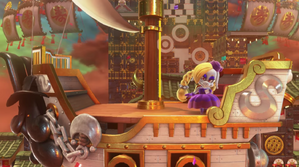 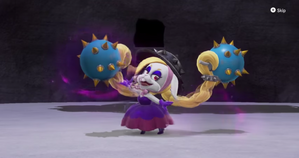 Hariet's final encounter in Dark Side. 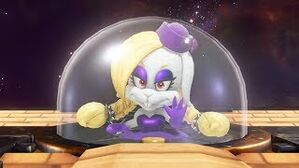 Hariet as a pilot of Robobrood. 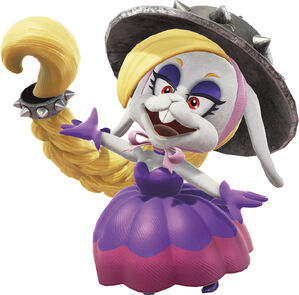 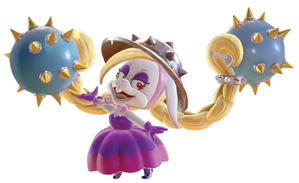