Have Jennifer all to himself. (failed)

Harris Chapman is one of the two secondary antagonists (along with Kay Satterwhite) of the 1996 videogame Clock Tower. He is secretly a ephebophile with an infatuation for Jennifer Simpson.

Harris works as a research assistant at the Southern Oslo University, along with Helen Maxwell.

He was voiced by Jojo Otani.

He is spoken to by Samuel Barton at the beginning determines whether the player will be Helen (never or once) or Jennifer (twice or more) for the rest of the game.

Later in the game, he joins in with the group to go to the Barrows Castle. Harris's role will change on the players choices in the scenarios.

It will revealed that Harris has been disguised as Scissorman to lure Jennifer in to the castle, so he could have Jennifer all to himself. however, he is killed by the real Scissorman.

In this scenario, he is a bystander and depending by the player, he is found hiding in the pantry closet, he will walk out of the closet and gives a fireplace key to Helen, or can be found with his severed head in a pot in the kitchen. 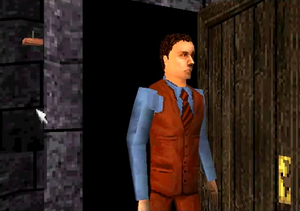 Harris in the game.
Add a photo to this gallery

Retrieved from "https://villains.fandom.com/wiki/Harris_Chapman?oldid=3764349"
Community content is available under CC-BY-SA unless otherwise noted.