Trying to think up his next big score.

Have Nathan Drake and Chloe Frazer help him locate Shambhala.

Harry Flynn is the secondary antagonist of the 2009 video game Uncharted 2: Among Thieves.

He is a British treasure hunter and former friend of Nathan Drake who becomes the leading expert for war criminal Zoran Lazarević in his quest for the Tree of Life.

He was portrayed and voiced by Steve Valentine in Uncharted 2: Among Thieves, and T. J. Ramini in the multiplayer of Uncharted 4: A Thief's End.

Prior to the events of the game, Flynn was once a business associate of American fortune hunter and adventurer Nathan Drake, and the two did a few jobs. One noticeable job is when he helped Drake in South America, and later interacted with Victor Sullivan, and the two threw insults at each other. What happened afterwards is unknown, but at some point, Flynn was hired by Zoran Lazarević, a Serbian war criminal who wanted to find the Cintamani Stone and Shangri-La. Though only mentioned, he also started a partnership with Chloe Frazer, and possibly had a relationship with her.

At the start of the game, Flynn and his partner, Chloe Frazer, approach Nate to enlist his help in stealing a Mongolian oil lamp from a Turkish museum for a wealthy employer, which they initially plan to cross and take all the reward for themselves.

Nate seems hesitant at first, but accepts upon realizing that the lamp belonged to famous explorer Marco Polo. Unknown to Nate, Flynn is actually working for the ruthless Serbian warlord Zoran Lazarević, who wants the power of the fabled Cintamani Stone hidden in Shangri-La. Flynn is similarly unaware that Nate and Chloe were once lovers, and while preparing for the museum heist, they secretly renew their relationship behind Flynn's back. The time finally comes and Flynn breaks into the museum with Nate, with Chloe waiting for them as their getaway driver. They find the lamp, which is filled with flammable blue resin that lights a map, revealing the location of Polo's shipwrecked fleet in Borneo.

With their mission successful, Flynn takes the map and betrays Nate, taunting him, before drawing out a gun, shooting at the glass cabinets (alerting the museum guards in the process) and fleeing. Nate is arrested and thrown in jail, but three months later, Chloe and Nate's mentor, Victor "Sully" Sullivan bail him out. After Chloe tells Nate that Flynn is working for Lazarević to find the Cintamani Stone, he and Sully decide to go after it themselves, with Chloe serving as their mole in Lazarević's army.

In Borneo, Flynn is revealed to have made little progress in his quest over the course of three months, much to the annoyance of Lazarević. Before they can argue about it, Lazarević's troops inform him that one of their own was caught trying to steal their artifacts, and Flynn watches as Lazarević brutally executes the traitor. At that moment, Nate and Sully, who were watching, trigger an explosion in the encampment.

With Lazarević off investigating the cause, Nate and Sully find a tomb containing Polo's crew, where Nate finds a Tibetan phurba dagger, deducing that its carrier will find a passageway to Shambhala via a temple in Nepal. Flynn and Lazarević's men catch them and Flynn, exaggerating his achievements, mocks them before Nate and Sully escape. Sully backs out, so Nate and Chloe continue on alone.

In Nepal, Nate and Chloe find the temple and the location of Shambhala, but just then, they and their allies, reporter Elena Fisher (another one of Nate's old girlfriends) and her cameraman Jeff, are ambushed by Lazarević's men. Jeff is wounded in the attack, and Nate and Elena try to help him to safety despite Chloe's protests. This buys Flynn and his employers time to catch up with them. Chloe, realizing she has to switch sides to preserve her cover and frustrated with Nate for compromising them, holds him at gunpoint just as Flynn arrives. Flynn, realizing Chloe was with Nate and their connection, orders his former partner and Elena to drop their guns and has Chloe escorted to Lazarević's train, before turning to Nate. Lazarević himself then enters the room, takes the dagger, kills Jeff, and forces Nate to tell him where Shambhala is.

Flynn searches Nate and finds a map, on which Nate marked Shambhala's location, and gives said map to Lazarević. Lazarević then leaves Flynn and one of his soldiers to deal with Nate. Elena, horrified at Jeff's death, asks Flynn how he can work for such an evil man, to which Flynn replies that it "beats working against him". As Nate expresses his disgust at how his former partner is just going to outright kill them in cold blood, Flynn orders Elena to get up. Angered, Elena punches Flynn in the face while Nate fights off the soldier, and both escape. Nate, knowing Lazarević will kill Chloe if he discovers her betrayal, convinces Elena to help him rescue her. From afar, they see her talking with Flynn before he impatiently takes her aboard the train.

With Elena's help, Nate jumps onto the back of the train and heads toward the front cars. As the journey progresses into the Himalayan mountains, Nate finds Chloe, but she refuses to come with him as he compromised them earlier. Flynn, annoyed that Nate is still following them, walks in during their argument and shoots Nate in the abdomen. Nate back into another coach with Flynn shooting at him, barely missing. Chloe begs him to stop and let Nate escape, but he shoves her aside and orders Lazarević's men to kill Nate. In desperation, Nate shoots a pair of gas canisters, causing an explosion that derails the entire rear half of the train over a nearby cliff, and he barely escapes the wreck and almost freezes to death before being rescued by the local Tibetans. Despite seemingly being rid of Nate, Flynn and his allies find that he reclaimed the dagger, which is the key to Shambhala.

Later, Lazarević's men attack a local Tibetan village, where Nate left the dagger with an old German explorer, Karl Schäfer. Lazarević kidnaps Schäfer and takes him to a monastery, where Flynn believes the gateway to Shambhala is. Lazarević brings the dagger, only to find Flynn still is making little headway. When Flynn asks Lazarević to give him more time, the irate warlord grabs him and slams him against a pillar, stating he has not come so far just to be thwarted by Flynn's incompetence.

Flynn, terrified, insists that the answer is somewhere in the room and that they just need to find it. Unconvinced, Lazarević reminds Flynn that Nate is still just one step behind them and stabs the dagger into the pillar just inches from Flynn's face. He declares he hired the wrong man for the job and walks out. Chloe expresses her dislike of Lazarević, and Flynn sheepishly leaves to try and make up with him, giving Chloe the dagger to see what she can do in the meantime. Unknown to him, Nate was watching the entire conversation, and as soon as Flynn is gone, he drops in and convinces Chloe to give him the dagger; Chloe agrees on the condition that he take down Lazarević for her.

Using the dagger and the information Nate has gathered during his quest, he and Elena uncover a secret passageway leading to Shambhala. However, Lazarević discovers them. When they refuse to give in to his demands, Lazarević has Flynn bring in Chloe to use as extra leverage. Nate finally gives in and dumps the blue resin from earlier into a cauldron in the middle of the room. At his order, Flynn gives Nate his lighter, which Nate uses to ignite the resin. As the entire room lights up blue, Nate uses the dagger to open the walls, only for yet another obstacle to present itself when the table-like platforms turn away from them. Lazarević orders a confused Flynn and Nate to fix it, which they do. A group of monsters attack them before Lazarević arrives and kills them, revealing they are human guardians of Shambhala, meant to scare away trespassers.

A frightened Flynn kicks one of the corpses, saying the "scarecrow" technique is "bloody effective". With Nate no longer any use to them, Flynn prepares to shoot him, but Lazarević wants him to see Shambhala first so that Nate can die knowing he has "taken it from him". Upon entering Shambhala, Lazarević prepares to execute Nate and his allies. Flynn, realizing he is going to kill Chloe, too, steps in, reminding him of their deal. Lazarević retorts that he does not tolerate traitors, but Flynn convinces him to spare Chloe and give her to him by threatening to stop helping him. Before Lazarević can kill Nate and Elena, another wave of guardians attack. In the ensuing fight, Chloe, fed up with Flynn, punches him and escapes with Nate and Elena.

As it turns out, the Cintamani Stone is just a big ball of amber; the real treasure of Shambhala is the blue sap of a prehistoric tree of life, which grants whoever drinks it near-invincibility. During this time, Flynn is shot and wounded, either by stray fire or by Lazarević himself (since by then, Flynn would've outlived his usefulness) and is forced to hold onto a grenade without its pin. While Lazarević and his remaining troops proceed on to the tree, Flynn stays behind in the main temple of Shambhala. As Nate's group enters and finds out the truth about the stone and about the tree, Flynn reveals himself and teases them, saying they just missed "Lazarebitch".

Elena maintains they can still stop Lazarević and offers to help Flynn over Nate's objections. Flynn, however, declines, stating it isn't as simple as just reforming the villain and saving the day. He then pulls out a hand grenade and, flashing one last charming smile, detonates it at point-blank range, killing himself; nothing is seen of him afterwards, implying the explosion literally vaporized his body. Although his suicide attack almost kills Elena, it fails to kill Nate, who goes on to defeat and kill Lazarević; the girl he takes is ultimately Elena after all, while Chloe, accepting that fact, goes her own separate way.

Flynn is a charming, but shifty and egotistical man. He seemed to care nothing for his past partnership with Nate, and once almost succeeded in killing him. At first, he seems to be a typically laid-back and easygoing double-crosser, but by the middle of the game, he becomes much darker and more serious. 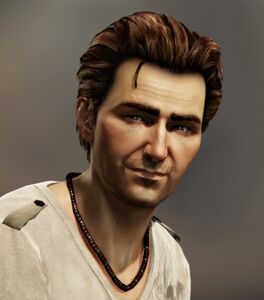 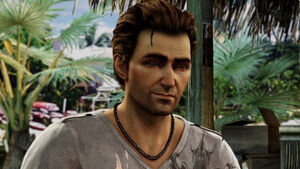 Flynn at the beginning of the game, meeting Drake. 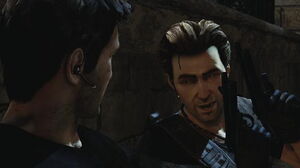 Flynn showing Drake dart guns to use on the guards. 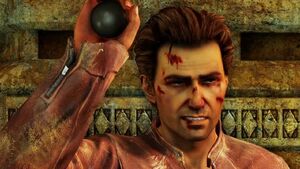 Flynn's death, killing himself to try to kill Drake. 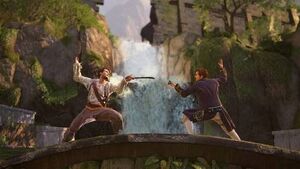 Flynn vs. Drake in the multiplayer Uncharted 4: A Thief's End.