Get Away From His Family (succeeded)

Abusive Parent
Harry Johnson is a minor unseen antagonist in Brickleberry. He is the father of Woody Johnson and the husband of Anita Johnson. He was an abusive father to Woody throughout most of his early childhood, but then he left the family one day and hasn't come back ever since. Although he never appeared on screen in the series, he made a partially obscured appearance in the third issue of the Armoogeddon comic book franchise.

Harry Johnson is an enigmatic man, who very little is known about, especially before becoming a husband and father. The earliest into his life we know of is in 1968, when he and his then-wife, Anita Johnson gave birth to their one and only child, Woody Johnson. Ever since Woody was born, Harry was an abusive, alcoholic, bigoted, generally awful father, who put his son through Hell and his supportive wife was right there by his side, abusing him too.

Some time during Woody's early childhood, Harry decided to leave the family entirely and never come back. The reason why he did this still remains unclear. Anita have given Woody contrasting reasons for his absence but all of the reasons ultimately put the blame on him. In "That Brother's My Father", she told Woody that one time, while he was cleaning the house, he forgot to dust the houseplant, leading to his father getting so mad that he abandoned him. In Amoogeddon - Part 3, Anita said that it was because Woody spilled Cheeto dust on Harry's Barcalounger recliner chair, which angered him into leaving. On the other hand, Woody had his own idea on why he left. He told Anita at the end of "That Brother's My Father", that he really left because he was fed up with her and that she's been projecting the blame on him ever since. However, the real reason he left has still yet to be clarified.

In "Two Weeks Notice", Woody mentioned his father for the first time, saying that when he was a little boy, his father would force him to wear panties and a bra so he could rape him in the absence of his dead wife. It is unknown how much merit this story holds on account of his mother being proven later to still be alive.

In "Little Boy Malloy", Woody told Malloy in great detail how his father would come down to his school every day and whip him mercilessly with an electrical cord. Woody said that he got revenge on his father by starting to derive sexual pleasure from these beatings.

In "That Brother's My Father", Anita told Woody that the reason for his father leaving was because he failed to dust a houseplant, when cleaning the house one day. Woody believed this lie for a long time and blamed himself. Feeling bad for him, Denzel Jackson told him that it was obvious Anita was lying and got him to accept that his father really left him because he was sick of dealing with his wife. Woody finally stood up to Anita and broke her heart by dropping the truth on her just before picking her up and throwing her out of the house.

In Armoogeddon - Part 3, Future Bobby traveled back in time to the year 1968 to kill Anita and ensure that oody would never be born. Woody time traveled after him and shot him down first, saving his mom's life. Anita noticed him and was grateful to this mysterious man for saving her life. Woody claimed his name was Rick Swordfire and Anita took him to the house to introduce this hero to Harry Johnson, who was sitting in the living room, reading the newspaper and making homophobic comments. Woody said that he didn't want to interrupt whatever they were doing and tried to go on his way but Anita got mad at Harry for not saying anything to this hero who just saved her. This started an argument and Harry left the house in a huff to go hit up the bar. Woody then became worried that he just prevented his own birth, as Anita cried to him about how her marriage with Harry is on the rocks and how they recently decided that it was best they have a baby. Woody encouraged her to have a baby with Harry as soon as he got back and even got her dressed up for his return. When Harry finally returned, he was blackout drunk and passed out on the couch. Anita told Woody that there was no way they were having sex now. Woody, assuming this meant he would never be born, decided to drink himself to sleep, as this was his last day alive. When Woody woke up, he discovered Anita next to him, saying that she had sex with him, meaning that Woody had just altered the past and become his own father. 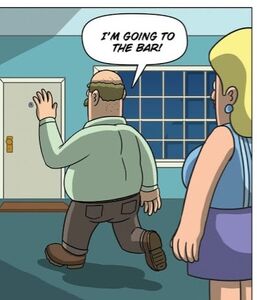 Harry Johnson leaving after a fight with Anita.