Get revenge on the Sugdens (failed)

Harold "Harry" Mowlam was a major antagonist of the British soap opera Emmerdale Farm. He his debut in December 1983 and departed in January 1986 upon getting by an unknown assailant. He was created by Richard Handford, who also created Derek and Keith Johnson. Richard created Harry and made him the main villain of the series in order to shake up the show. Harry's storylines helped boost the show's ratings and hit the peak popularity in 1985.

Harry began a quarrel with neighbor Matt Skilbeck as Matt witnessed Harry attack his dog. Matt stole the dog and refused to give him back so Harry took legal action. At the same time, Harry got Jackie Merrick, Archie Brooks and Mike Conrad to help with quarry work. He refused to pay them so they stole his motorbike. Harry knocked Jackie off the motorbike and fled the scene. Sgt. Ian MacArthur told Harry he'd overlook the case if he dropped the charges against Matt. In 1985, Harry was involved in an armed robbery with Derek Warner and Keith Johnson. The trio initially intended to blow up the truck with the guards inside and had the truck rigged but the guards managed to get them to compromise. Harry also sexually assaulted Matt's wife Dolly, causing her to miscarry her child. Harry attempted to hide the robbery money for himself but was almost run over and taken knifepoint by Derek, who threatened to stab him if he didn't tell him where the money was. The robbery made Harry think too highly of himself and in 1986, he crossed Derek by helping himself to the robbery money. Harry also continued to make advances on Dolly Skilbeck and Matt confronted him. He caught Harry attacking his dog and stealing the Sugden's sheep so he got in the car with Harry and fought until they collided with a wall. A fight broke out in which Harry attempted to kill Matt but Matt managed to free himself and punched Mowlam in the stomach. Mowlam tumbled down a hill and hit his head on a rock. The next morning, Harry was found dead and Matt was charged with murder. However, he was exonerated when it was revealed the body was found further down the river from where the fight took place. Derek was eventually revealed to be the murderer, and was caught after attempting to kill Keith, two officers and taking the vicar hostage. 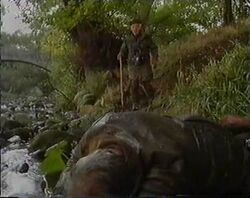 Harry is found dead on the morning of 28 January 1986.
Community content is available under CC-BY-SA unless otherwise noted.
Advertisement