Kill the descendants of the jurors that had him convicted (failed)>.

Harry Volk, also known as Harry Bolston, was a pianist who was convicted of murder in the WB TV series Smallville.

He served as the main antagonist in the Season One episode "Hourglass".

His elderly persona was portrayed by the late George Murdock, who also played God in Star Trek V: The Final Frontier, Lieutenant Scanlon in Barney Miller, and voiced Boss Biggis in Batman: The Animated Series, while his younger self was portrayed by Eric Christian Olsen.

In his youth, Harry was a talented pianist and was first in line to receive a scholarship at to the Metropolis Conservatory. His teacher, however, recommended another candidate that shattered Harry's dreams. Enraged, the young man killed the teacher's son.

He was convicted of murder and sentenced to life in prison by a jury of local jurors. One of the jurors at his trial was none other than Hiram Kent. In prison, he took a hobby of learning descendants of families that lived in Smallville.

Harry served sixty years of his sentence and was unfortunately released from prison as he was now a harmless, crippled old man. He returned to his hometown of Smallville where he lived in a retirement home under a new name Harry Bolston.

Lana Lang volunteered at the center and tended Harry who was listening to classical music in his room. He confesses to being obsessed with the local history of Smallville after revealing that the Langs came to Smallville in 1938.

Harry uses a wheelchair and asked Lana to push him around the grounds and tell him what the Langs have been up to since 1938. She took him to the koi pond, where Harry asks Lana to leave him on the bridge and go back to his room to fetch him a scarf.

While she was away, he tried to sneak a cigarette, but dropped his lighter. He reaches over to retrieve it, but upsets his wheelchair, falls through a string of decorative lights and tumbles into the pond and sets off a brilliant display of sparks.

The electrical charge didn't kill Harry instead he was rejuvenated when the electricity from the chair motor interacted with the radioactive meteor rocks in the pond. This somehow reversed the aging process and left him as a young adult, restoring his health and stamina.

He stood up from the water and laughs manically. Harry dressed in scrubs and returned to his room retrieving some old newspaper clippings and lists containing the name Zoe Garfield, a waitress at the Beanery. He went to the Beanery and enjoyed a large cheeseburger where Zoe waited on him.

Harry met Clark Kent and Chloe Sullivan when he eavesdropped on their conversation with Lana and wishes them luck finding their missing patient.

With his newfound youth, Harry decided to exact revenge on those who sentenced him to prison by killing their children. Harry returned to the retirement center where he played the piano. Cassandra Carver tries to trick him into taking her hand, but Harry refuses saying he already knew his future. He also removed his picture of his younger self to hide his identity.

Harry's first victim was Jim Gage who was watching a football game in his home when the power was cut. Harry was at the front door dressed as an electrician and as he checks the circuit breakers, he asked Jim if he's any relation to Randolph Gage. Jim admits that Randolph was his father and died in 1993. Harry removed a length of piano wire from the bottom of his toolbox and strangled Jim with it.

Jim's murdered was discovered and Pete Ross told Chloe and Clark about it. Chloe says that was the same way Harry Volk killed the piano teacher's son in 1945. Clark thinks it might be a copycat, but Chloe has a photo of Harry Volk from the 1940s. It looks just like that guy they saw at the Beanery.

Of course, Chloe is ready to assume that Harry has traveled through time. Clark suggests they search Harry's room for fan mail of a copycat. Chloe and Pete find more newspaper clippings in Harry's room.

When Clark sees a picture of Zoe Garfield, he recognizes her as one of the people he saw a glimpse of in his most recent vision of his future. He guesses that Harry might be after her and he rushes off to the Beanery.

At the Beanery, it's closing time but Harry doesn't want to leave. He offers to play the piano while Zoe cleans up the shop. Harry reveals that Zoe's grandmother Eve Garfield helped kill his future, and now he intends to kill Zoe's future. Harry tries to strangle Zoe just as Clark smashes in the door and saves her.

Harry tried to stab Clark with a knife but it shattered upon impact and Clark easily overpowered him. He ended up in the hospital but when Sheriff Ethan Miller entered his room to arrest him, he finds the aged Harry Bolston handcuffed to the bed.

At the koi pond, Lana tells Clark that Harry told police that a kid who was obsessed with his case kidnapped him. When Clark begins to feel ill, he looks down into the pond and sees the meteor rocks. Clark tells Harry that he suspects the truth.

Harry seems more interested in the fact that his name is Kent. He calls the nurse to ask Clark to leave. Later, Harry pushes himself out to the koi pond in his wheelchair and dives in.

At the Torch, Chloe and Pete are studying news coverage of Volk's trial when Lana arrives to announce that Harry is gone. Chloe finds a list of jurors that worked on Harry's trial with Hiram Kent's name on it. The younger Harry went to the Kent Farm where Martha Kent answered the door. Harry posing as a gas man told her Jonathan called him but Martha grew suspicious and figures out that Harry is lying.

Martha pulls a lever and buries them both in grain. Clark and Jonathan arrive just in time to pull her out and resuscitate her. But Harry died as he returned to his original age. 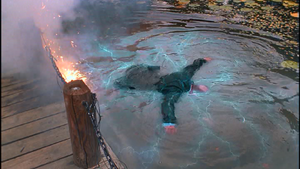 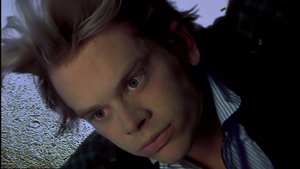 The electric current mixed with the meteor rocks transformed Harry into a teenager. 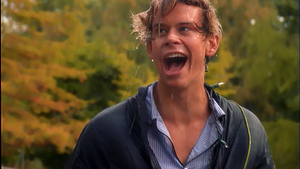