NOTE: This article is about the incarnation of Pied Piper from the Arrowverse. The mainstream version can be found here: Pied Piper (DC).

Get revenge on Harrison Wells.

Hartley Rathaway, going under the alias Pied Piper, is an antagonist in the first season of The Flash. However, as of the altered timeline in the second season episode "Flash Back", Hartley is now good and an ally of Team Flash.

He is portrayed by Andy Minetus.

Hartley was a child prodigy and son to Rachel and Osgood Rathaway. For a long time, he was beloved by his parents and set to eventually take over the family business. However, when he came out as gay to his parents, they threw him out and cut off all ties to him..

Eventually Hartley was hired by Harrison Wells at S.T.A.R. Labs, becoming his protege and favored employee, something that did not sit well with his fellow S.T.A.R. Labs co-workers, including Caitlin Snow. While he got along well with Wells, Hartley was arrogant and demanding towards his co-workers making very few friends. He was quick to alienate himself to Cisco Ramon on his first day of work, showing outward contempt for Cisco, due to the fact he arrived to work wearing a Star Wars T-Shirt and also because of Wells' praise of Cisco's skills.

Eventually, Hartley made the realization that the particle accelerator could explode, Wells refused to listen, fired Hartley in order to avoid his interference, and blackmailed him into staying silent about the problem. As Hartley predicted and Wells planned, the accelerator did indeed explode. Hartley was caught in the effect, resulting his hearing being augmented to superhuman levels. Unfortunately the levels caused him overwhelming pain and caused him to have to create a special device in order to control his hearing. He also went on to create gloves that emitted sonic attacks.

He attacks Harrison Wells at his home. He calls Wells, claiming that they both know what Wells did, and then uses his powers to smash the glass roof of Wells' living room. Though the police is called, Wells tells them that it was merely a pranks by someone who thought Wells did not suffer enough for the explosion at Star Labs. He does so because he expects the culprit to be Hartley. After investigating the scene, Barry finds out that the glass was not smashed by a projectile.

Later, Barry talks to Joe West when they are told that Rathaway Industries is under attack. There, Hartley is standing in front of the building, using his sonar powers to attack it. Doing so, he smashes the glass on multiple floors of the building. When police arrives, Rathaway uses his power on them too, destroying one police car and smashing the windshield of another. When the Flash arrives and knocks Rathaway over, Hartley is surprised when Barry calls him by his names. Hartley responds that he knows some names too - Cisco Ramon, Caitlin Snow and Harrison Wells. He claims to be able to sense the radio waves emerging from his suit. He asks whether his old associates from Star Labs are the ones on the other end and whether they would be able to hear Barry die. Hartley then smashes Barry back with his powers. Barry however gets back up immediately and stops Hartley by ripping off his sonar gloves. Barry comments that Hartley does not look so smart now, but Harley responds that he was smart enough to figure out Harrison Wells' secret. Barry then brings Hartley to Star Labs where he meets Cailin and Cisco again. After provoking them, Hartley gets imprisoned in the meta-human wing where Cisco runs a scan on him. He detects four metallic objects in Hartley's ears and demands that Hartley takes them out by Hartley claims that he suffered a head trauma when the accellerator exploded and that taking them out would cause him giant pain.

Harrison Wells then dismisses Cisco and Caitlin to talk to Hartley alone. Hartley tells him how he found out that Wells was working with the Flash. Wells calls him brilliant and apologizes for the aguish Hartley had been through because of him. Hartley then adresses Barry, who is watching the camera feed. He tells Barry that while it may be fortunate for him that Wells is working with him now, Wells will eventually betray him and that if Barry is fortunate he will only be dead. When Wells turns to leave, Hartley tells him that he told Barry that Wells had a secret and wishes Wells good luck on letting them in on it. Harrison then tells the team that the day Star Labs exploded, Hartley told Wells that there was a chance that that might happen. However, Wells decided that the results outweighed the risk and started the accellerator nontheless.

Analysing Hartley's gloves, Cisco finds out that the gloves could have destroyed the entire building in one blast but that Hartley set them to minimal level. Realising that Hartley meant to get caught, Cisco checks the camera feed to see that Hartley broke out of his prison cell. It is revealed that while the devices in Hartley's ears toned down the noises, they also are explosives and Hartley rips one out to blast open the door. Gaining access to the control room, Hartley knocks out Caitlin and takes back his gloves. He takes a USB drive out of the gloves and puts them into the main computer. He then approaches Harrison Wells.

When Barry returns to Star Labs he finds Wells perfectly okay, who tells him that Hartley is gone. To stop Hartley from whatever he is planning, Wells addresses the media and reveals the truth about the incident at Star Labs. He tells the media that Hartley warned him about the risk and that he turned on the device nonetheless. However, at Star Labs Wells is contacted by Hartley who tells him that he sees through his intentions. Hartley tells Wells that he wants the Flash to fight him. While waiting for the Flash, Hartley attacks civilians at the dam outside Central City, eventually throwing a car off the dam. Barry saves those civilians.

While Barry is on the dam, Cisco finds out what Hartley stole from Star Labs: the data on Barry's molecular scans. Wells contacts Barry and tells him to retreat immediately. However, Barry instead again rips Hartley's gloves off, believing that he has defeated him. Hartley then reveals that by taking off the gloves, Barry had the gloves emit a tone that matched Barry's speed frequency and thereby slowly kills Barry. Barry indeed falls to the ground, spitting blood. To save Barry, Wells uses nearby cars radio signals to interfere with Hartley's weapons causing them to explode in Hartley's hands.

Hartley finds himself back in his cell at S.T.A.R. Labs, where he is confronted by Cisco. Rather than being worried, Hartley cooly informs Cisco that Cisco himself will let him out of the cell soon, because he knows where Ronnie Raymond is and what really happened to him. Hartley indeed shows Cisco what happened to Raymond, leading to the discovery of Firestorm, but escapes after doing so.

A year later, Barry travels back in time a bit too early to his initial encounter with Hartley as he intended to find Eobard Thawne and be taught how to increase his speed to stop Zoom. Barry took Hartley's rigged hearing aids and gauntlets from him, imprisoning him back in the Pipeline. When a Time Wraith that followed the future Barry back to the past shows up and attacks S.T.A.R. Labs, Cisco and Caitlin seek refuge in Hartley's cell, trusting him enough to give him back his gloves to drive the wraith away.

When Barry goes back to the present time, it appears that his actions have had a major impact on Hartley: Hartley is now a good guy and ally to Team Flash, helping to destroy the wraith with his gloves before it can kill Barry. Hartley then promptly leaves to have dinner with his parents, implying a much better relationship between the three. 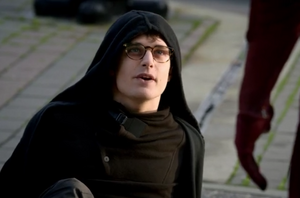 Hartley is defeated outside his father's building 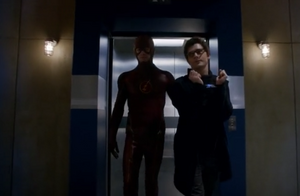 Hartley is brought to Star Labs 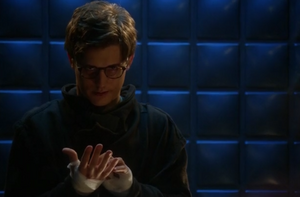 Hartley in the meta-human prison cell