Hanging out with Ran.

Haru Kusao is the best friend of Ran Kuroki and an antagonist-turned-supporting character in Kamen Rider Fourze. He uses a Zodiarts Switch to become the Musca Zodiarts.

He was portrayed by Jigen Araki.

Haru initially accepted to Zodiarts Switch so he could use it to protect Ran to repay her for protecting him at their previous school and to show her he didn't need protecting. However Haru soon became drunk on the power of the switch, leading to an increasingly unstable mental state.

The Musca Zodiarts later fights Fourze, who manages to negate his power to divide his body into flies using the Net Switch to force the Zodiarts to stay solid. Fourze the assumes his Magnet States to finish the Zodiarts off, but Kengo warned him that if Haru was defeated in his Zodiarts form while he was mentally unstable, he would remain that way. Ran yelled to Haru and apologized for trying to protect him when he didn't want protecting. Hearing Ran's words, Haru comes to his senses and asks Gentaro to send him back to his body. Gentaro then destroys his Zodiarts form with a Super Electromagnetic Bomber, bringing him back to normal.

While recovering from his injuries in a hospital, Haru was given provisional membership of the Kamen Rider Club alongside Ran. Haru was later used by Leo to lure out Ran, who was the final Horoscopes Pisces.

At the end of the series, Haru and Ran become official members of the renamed Space Kamen Rider Club.

A Musca Zodiarts was created from the Akumaizer's Infinite Monster Plant. It fought against Kamen Rider Double and was destroyed by the Rider with a standard flying kick.

The Musca Zodiarts is one of the revived monsters that join Space Shocker. In the final battle it can be seen fighting against the Flashman. 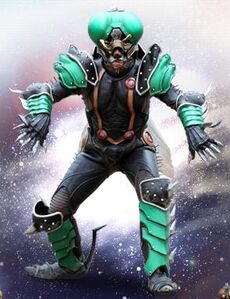 Musca Zodiarts
Add a photo to this gallery

Retrieved from "https://villains.fandom.com/wiki/Haru_Kusao?oldid=3494609"
Community content is available under CC-BY-SA unless otherwise noted.