Painting her nails.
Talking to and taking care of her family.

Make sure that her family is taken care of no matter what.

Haruki Sagae (in Japanese 寒河江春紀) is a member of Class Black and an antagonist of Akuma no Riddle. Haruki planned to have her reward being enough money that her entire family would be taken care of forever.

She is voiced by Fumiko Uchimura in the Japanese version and Carli Mosier in the English version.

Despite her demeanor, Haruki is shown to be very determined to carry about her mission showing a some nihilistic and suicidal tendencies in how she was prepared to kill herself as well as both Haru and Tokaku even showing disappointment that she survived yet failed to kill the others. However, knowing she is too wounded to continue, she accepts defeat and decides she needs to find another way to make sure her family will be fine.

Haruki has light skin, gold eyes, and long red hair. Her hair is tied up in a ponytail with barrettes on her bangs. She wears a beige jacket, a white shirt, a red plaid bow tie, a red skirt, white socks, and brown shoes. She usually wears bracelets and a purple hair tie on her right wrist. She wears long studded fingerless gloves before she attempts to kill Haru.

Haruki's past is not covered in great detail other than she was born into a large family and became an assassin to provide for her nine siblings. She spent all the money from her first kill on a small bottle of pink nail polish and the rest to feed the family.

At an unknown point, she was recruited to join Class Black and was offered any reward if she could kill Haru Ichinose. Seeing this as a way to make sure her family would never go hungry again she gladly accepted the invitation. Despite this Haruki decided to not rush her only chance and tries to at least have fun with the other students often socializing with them.

After reassuring her siblings over the phone she'd be home soon Haruki meets goes to take a shower and tauntingly points out to Haru that so many people have died for her yet somehow Haru is always cheerful. After Isuke Inukai notices that Haruki seems to be more focused on her family's needs vs her own desires and recommends Haruki kill her family so she can follow her own desires at which point Haruki ignored her. Haruki then manipulates Haru to come to the gym to kill her while trying to have Tokaku meet her in another location. When Tokaku still shows up to protect Haru, Haruki does admit she was honest when she previously said that she didn't truly want to kill Haru but that it was a necessary thing for her to win.

It is revealed before Haruki set this up that she made sure if she died but succeeded in killing Haru that Nio Hashiri would make sure her family would get the money. In a final attempt, she brings down the roof of the gym though ultimately it fails to kill any of them forcing her to admit defeat. In the final episode, she is shown to be working as a construction worker to earn money for her family and apparently to help send them and herself to school. In the manga, it is shown that she is now dating Isuke who asks that she come home soon. 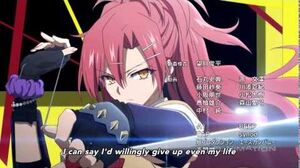