Rumi
The Jade Princess
The Quiet One
Kabuki Mask

Searching for the three Oni Masks in order to resurrect Lord Garmadon.

Convince Lloyd that she is in love with him so he can use his Oni power to obtain the Oni Mask of Hatred.
Resurrect Lord Garmadon using the three Oni Masks (all succeeded).
Rule Ninjago by Lord Garmadon's side (succeeded for a while but failed).
Save a child and his family from suffering the same fate as she did during her childhood back than (succeeded).
Have her revenge on the ninja.
Aid the Crystal King in his goals (both ongoing).

Harumi, also known as the Quiet One and later the Kabuki Mask, is one of the two secondary antagonists (alongside Pythor P. Chumsworth) of LEGO Ninjago: Masters of Spinjitzu. She is the founder and leader, later second-in-command, of the Sons of Garmadon and later the second-in-command of the Vengestone Army.

Although she at first appears to be a new supporting character and a potential love interest to Lloyd, she, in fact, wants to resurrect Lord Garmadon without any of his positive characteristics because she believes he is the ruler Ninjago deserves.

During Season 9: Hunted, Harumi was thought to perished in the collapsing of a building, Unbeknownst to Garmadon and the Ninjas, Harumi actually survived and re-appears in Season 15: Crystalized, serving as the Crystal King’s herald and the leader of his council of the Ninja's other enemies.

She was voiced by Britt McKillip, who also voices Queen Chrysalis in disguise as Princess Cadence in My Little Pony: Friendship is Magic, while her Kabuki mask persona is voiced by Andrew Francis, Who also voices Morro in the same series

She serves as the central antagonist of The Oni Trilogy, a mentioned antagonist in Season 11: Secrets of the Forbidden Spinjitzu, Season 12: Prime Empire and Season 13: Master of the Mountain, and the secondary antagonist of Season 15: Crystalized.

As a child, Harumi lived in Ninjago City with her mother and father and looked up to the Ninja as heroes. However, when the Great Devourer came and destroyed the city, Harumi's parents were killed by the beast, and Harumi became disillusioned with the Ninja for being unable to stop it.

Harumi especially hated Lloyd Garmadon, son of Lord Garmodon, for releasing the Serpentine from their tombs that allowed the Great Devourer to be unleashed in the first place, but came to idolize Lord Garmadon himself for his role in killing the enormous snake and saving Ninjago.

After the trauma of losing her parents, Harumi was temporarily rendered mute, and the rescue team tasked with saving her called her the "Quiet One" because of her catatonic shock. After recovering, Harumi was adopted by the Emperor and Empress of Ninjago, but did not enjoy her new role as princess and carried within her a deep loathing throughout the rest of her childhood and teenage years. She even became more disappointed that Lloyd has purified Lord Garmadon of his evil by defeating the Overlord, and that Garmadon would later sacrifice himself to stop Master Chen and his army.

As time goes by, Harumi began an organization called the Sons of Garmadon, whose goal was to resurrect Garmadon's evil self using the three Oni Masks scattered throughout Ninjago, having become aware that Garmadon was part Oni and would, therefore, be capable of being reborn through a ritual involving them.

Harumi carried this secret with her for an undetermined amount of time, but eventually earned the ire of her caretaker, Hutchins, who warned the Ninja upon their first encounter to stay away from her.

The Ninja first encounter Harumi in Ninjago's Palace, where Lloyd attempts to save her from a presumed attack (which was actually just some fireworks going off). Harumi formally greets each of the Ninja, even earning the praise of Nya, who was initially irritated with her. After an inquiry by Jay, Harumi and the royal family reveal that she was adopted by them after her birth parents had died. Lloyd later accidentally stumbles upon her removing her makeup in her private quarters.

After witnessing her escaping the palace while carrying a satchel, Lloyd mistakes her for a kidnapper, although he eventually realizes his mistake. Harumi and Lloyd then have an intimate conversation, and witness Samurai X saving a group of homeless children from an attack by the Sons of Garmadon, with Lloyd grateful that the Ninja is not the only ones looking out for Ninjago. Harumi claims that she likes to sneak out at night to give food to the less fortunate, but Harumi's caretaker, Mr. Hutchins, appears and takes Harumi and Lloyd back to the palace. The next day, the palace is attacked by the Sons of Garmadon, and Harumi and Lloyd escape the palace with the Mask of Deception. They are then attacked by Ultra Violet, who steals the Mask of Deception before Lloyd and Harumi escape onto the Destiny's Bounty. After the events of the palace, Harumi stayed with the ninja on the Destiny's Bounty. While she was there, she takes out a photograph of her as a child with her deceased biological parents and another with the Royal family. Later on, when the ninja go out to chase Mr. E, Harumi tries to go with them but is told by Lloyd to stay on the Bounty with P.I.X.A.L. to ensure she is not captured by the Sons of Garmadon. Later, Harumi helped Nya build a bike for Zane until she hands Nya the wrong tool, then she goes to make herself useful. Offscreen, she informs Ultra Violet that Zane would be going undercover as Snake Jaguar. Harumi then pushes out the bike for Zane to get on afterwards. Some times later, Mr. E sent Harumi a secret encryted message stating that "the trap has been set". She was standing with the ninja in front of Zane while he was being repaired and later sang a lullaby to baby Wu. Shortly afterwards, she almost kisses Lloyd but he gets nervous and backed away before leaving.

Some time after, she was seen defending the ship from the Quiet One, who corrupted Samurai X who was revealed to be P.I.X.A.L. until she gets captured by the Quiet One. Lloyd tries to save her but both end up falling out of the sky. They both survive the fall and land on the ground safely. Harumi later uses the map to the Mask of Hatred as a sling for Lloyds arm, for he had injured his arm in the fall. After having been separated by the Ninja, both Lloyd and Harumi set out to find the last Oni Mask. In the episode The Quiet One, both were seen running away from a green monster and hide together. They then come out of their hiding spot and Harumi fixes Lloyd's arm sling causing Lloyd to smile and blush before they both head to Strangler's Path. After a while, Harumi chased a Strangle Weed that had pulled Lloyd to a tree and she threw Lloyd's sword at it. She ran towards Lloyd and Lloyd starts questioning how she threw the sword like that. Harumi then gave a kiss on the cheek to Lloyd to make him stop asking questions. Lloyd gives his sword to Harumi while Harumi gives Lloyd the map to the last Oni Mask. Harumi cuts some vines some time later and finds a boat with a Sons of Garmadon insignia on an abandoned boat. They both enter the boat and find another map. Harumi starts the engine and is in charge of steering. After a while, They both start talking about who was the greatest villain was the one that got away before they realize something was in the shallow water. She starts to the engine at full speed and try's to get away from the creature. The creature got away and the boat was pulled by the Black River's current. Harumi tried to steer back but couldn't and both Lloyd and Harumi fell into the water.

An A.I. copy of Harumi was created by Unigami within the digital world to fight Lloyd. She was the final boss for the ninja to obtain the orange Key-Tana. When Lloyd volunteered to fight the final boss, an avatar version of Harumi appeared. At first, this avatar tricked Lloyd into falling for her again before taking the oppurtunity to land the first hit while Lloyd was distracted. They both traded hits and eventually the avatar Harumi realized she wasn't going to win the fight. She started tricking Lloyd that she was sorry for everything. However, Lloyd realized she wasnt the real Harumi when the avatar answered incorrectly on what they both did together on the first night they meet. They both traded final blows which resulted with Harumi dissolving and Lloyd transforming into an energy cube.

At some point, Harumi was seemingly recruited by the Crystal King to join him and his council. After doing so, Harumi would begin to recruit previous enemies of the ninja to help the king, such as Pythor, Aspheera, Vangelis, and the Mechanic. After the villains finally met at the Crystal King's headquarters, a masked Harumi would reveal that Lloyd had entered the meeting, disguised as the Mechanic. After capturing him, she would finally reveal her identity to him before Lloyd blacks out. 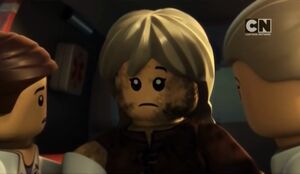 A young Harumi after losing her parents to the Great Devourer. 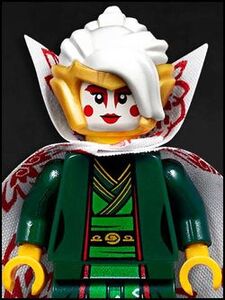 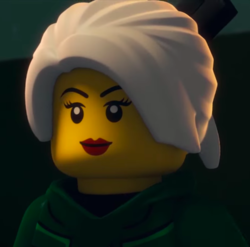 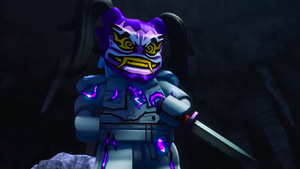 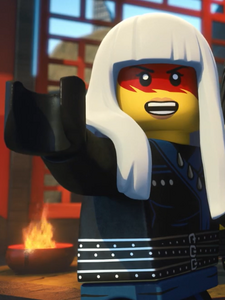 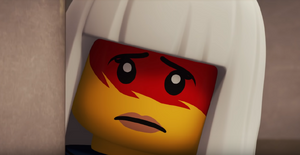 Seeing a family trying to escape a building, reminding her of her past. 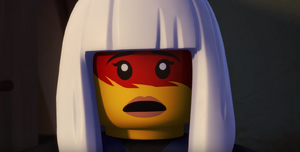 Harumi seconds before her presumed death. 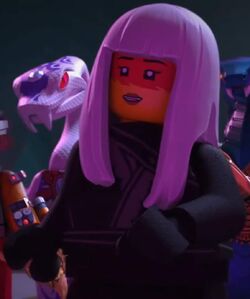 Harumi taunting Lloyd, claiming he is becoming like his father.