Exterminate life on different planets and drain their cores for resources.

In an unspecified time in the past, the Harvesters presented themselves as a threat to the universe itself, due to their plague-like nature. Attacking from their own homeworld, their empire encountered a highly-advanced civilization of trans-sentient beings which they pushed to the brink of extinction.

For thousands of years, the Harvester Empire has been at war against a coalition of many alien races, who lost their planets to the Harvesters. This war remains at a stalemate as the Harvesters could not locate their enemies' planet of origin. Because of this, the Harvesters attempt to hunt down a sapient artificial intelligence known as the Sphere for its vital information on their enemies. The remnants from this civilization escaped with technology that they stored at a sanctuary world, where they have since actively prepared species with the necessary tools to combat the Harvesters. Recognizing the beings as a threat, the Harvesters are determined to discover the sanctuary world and prevent the spread of the means that can defeat them.

The first recorded interaction between humanity and the aliens was in 1947, when an Attacker crashed on the Foster Ranch outside of Roswell, New Mexico. In the crash, two aliens were killed, while a third was seriously injured. The crashed ship, the two bodies and the injured alien were brought to the new Air Force installation outside of Rachel, Nevada called Homey Airport, (better known as "Area 51"). The survivor died within a matter of weeks. Over the next 49 years, scientists at Area 51 studied the Attacker, attempted to repair it and studied the physiology of the three alien corpses. However, none of the technology of the Attacker could be accessed, as there was no Mothership nearby.

Vietnam War veteran Russell Casse claimed to have been abducted by the aliens in 1986, with the purpose of conducting horrific experiments upon him. However, the veracity of these claims are debatable and as such, Casse was largely dismissed for suffering Post-Traumatic Stress Disorder (PTSD).

On July 2, 1996, a Mothership arrives at the Moon and begins to transmit command signals into Earth's satellite system. During this time, a number of satellites crash into the Mothership, which significantly disrupts terrestrial communications. After establishing a permanent position, the Mothership deploys three dozen city-sized Destroyers to position themselves over major cities. The signal progressively becomes weaker after every new transmission, with the end of the signal indicating when each Destroyer should fire upon cities.

On July 3, 1996, humanity is devastated, as the largest cities are now in ruins and hundreds of millions of people are dead. The Destroyers move on to other major cities, with the intention being to destroy every last one within a matter of days. There are a number of attempts by humans to defend themselves against the Destroyers, but each of these ends in utter failure, while the alien casualties are minimal, with only one reported crashed Attacker.

On July 4, 1996, the tide of war takes an abrupt turn. In the early Nevada morning, the captured Attacker from 1947 is deployed from Area 51 by the humans, with Captain Steven Hiller piloting and computer scientist David Levinson as a passenger. The Mothership summons the Attacker and docks it in the center of the ship. Levinson connects to the aliens' internal network and uploads a computer virus that disrupts the Mothership's systems and causes the shields to go down for fifteen minutes. With this slim window of opportunity, the United States Air Force manages to destroy a Destroyer when Casse goes kamikaze into the primary weapon. This strategy is shared with other nations and the Destroyers everywhere are destroyed. A Destroyer that previously landed and drills into the earth's crust in the Congo issues a distress signal, calling for other civilizations to come to their aid. Soon after, Hiller and Levinson shoot a nuclear missile into the transport hub of the Mothership and escape. The ship explodes, thus ending the first invasion.

In the 20 years following the first invasion, humanity has worked industriously to prepare for another global threat; the nations have unified to create a defense grid around the planet and Moon that cannibalizes the alien technology from the debris of the first invasion.

A massive Harvester Mothership in the midst of a mission receives the distress beacon from the first mission. Infuriated, the Queen orders an assault on Earth. Their enemy, the Sphere, arrives shortly before they arrival of the Harvester Mothership, but is mistaken for the aliens, so it is shot down by the humans. The Harvester arrives and promptly disables Earth's defenses and situates itself over the Atlantic Ocean.

Upon detecting the presence of the Queen, the humans launch a defensive strike against the Harvester Mothership, with the intention of killing her. Predicting this move, the Queen allows the humans close to her, then has Attackers swarm the scene. A sparse number of humans infiltrate the Harvester and crash land in the ship's interior ecosystem, due to an electromagnetic pulse issued.

The Sphere is activated, which prompts lures the Queen's ship. Taking advantage of her determination, Levinson reroutes the signal from the Enemy to a space tug carrying cold fusion bombs, piloted by former President Whitmore. Through a sacrificial mission, Whitmore flies into the Queen's ship and detonates the bombs directly in front of her. The Queen, however, survives and continues her pursuit of the Enemy. Upon snagging the Enemy, the Queen is attacked and killed by ships piloted by Dylan Hiller and Jake Morrison. With the death of the Queen, the aliens go catatonic, the Harvester releases its grip on Earth and the second invasion ends.

As a whole, the Harvesters operate as nomadic hive minds that strategically strips planets of their resources. Based from Harvester Motherships commanded by Queens, the civilizations travel to their selected targets, then deploy their Destroyers to incapacitate any indigenous populations that could pose a threat. Once the native species are incapacitated, Troop Transport ships are deployed for the aliens to directly invade and begin harvesting the resources.

While the Motherships act as individual civilizations for the aliens, the species maintain a connection with one another. Should a mission put a Mothership in danger, a distress beacon will be activated, prompting the arrival of reinforcements.

The aliens are shown to be completely merciless and single-minded in their conquests. They destroy any indigenous lifeforms that approach them and refuse requests for parlay. Depending upon the mission, the aliens may opt to utilize the indigenous species' tools, such as artificial satellites, as means for accelerating their invasions.

The aliens are noted for sharing a number of similar characteristics as humans, such as a comparable tolerance for climates and being carbon-based. The warriors average at approximately 5' in height and are about as durable as a human being. While bipedal and generally humanoid, the aliens have extra inverted joints that split the tibia, radius and ulna. Their heads are generally slender, with a pointed chin and a cranium that expends far back into a triangular dome shape. Their eyes are glassy, milky and ovular, with their eyelids being sub-dermal.

The greatest difference between humans and aliens are vocal cords, which the latter lacks except the Queen; they primarily communicate via telepathy. This extra-sensory feature can be utilized as a horrendous weapon in close quarters, as the aliens can inflict physiological trauma by inducing vivid images and by stimulating pain receptors, effectively discombobulating subjects.

The Queen shares the same basic structure and shape as the warrior, though she is typically many times the size of her underlings. The Queen dictates complete control over the warriors of her Mothership, in the fashion of a hive's societal structure. While in a suit, the Queen is a terrible force to be reckoned with, as her strength and size alone allows her to unleash devastating physical attacks and withstand heavy barrage from human weaponry.

The aliens are an extremely advanced species in both terms of technology and sophistication. However, they are noted to have reached a plateau in which they have made no major advancements in at least decades, as their success rate has not necessitated them. As linear travel is inefficient, the aliens instead utilize worm holes to significantly decrease the duration of their journeys. The aliens maintain gargantuan vehicles, including Motherships, Destroyers, Attackers and Troop Transports.

The Mothership is a megastructure and central hub for each civilization. It is noted for being 150 to 2,900 kilometers in diameter and constituting more mass than all the smaller vehicles combined. The Mothership provides impenetrable shields to every smaller vehicle via signals. All ships that enter the Mothership's range are put on automatic pilot and brought to dock in the central transport storage facility at the center of the ship. Beneath the storage facility is a staging area, where Troop Transports and infantry are assembled. During an invasion, the Mothership will generally remain at a distant orbit and not engage directly with the target, but will provide shielding for the smaller vessels.

The Destroyer is a 15 mile-wide craft that serves as the primary offensive weapon during an invasion. The ship is dome-shaped, with a command tower protruding from one end, which provides direction. The Destroyer is noted for being slow-moving, but devastatingly effective against populated areas. In the center of the underside of the Destroyer is a large cone-shaped weapon that, after charging, delivers an energy blast has the approximate effect of an atomic blast. There are a number of ports across the surface of the Destroyer that may both deploy Attackers or deliver small, concentrated energy blasts capable of destroying human military aircraft.

The Attacker is a small fighter-class vehicle with the approximate capabilities of a McDonnell Douglas F/A-18 Hornet in a terrestrial environment. The interior is designed to be commanded by two to three aliens. The Attacker is armed with two small energy cannons that serve as viable weapons against small targets. While generally short-ranged, the Attacker can adeptly fly in space, as any other alien craft.

The Troop Transport is a medium-sized craft that only two humans have seen, as no ships of its kind had the opportunity to leave the Mothership during the first failed invasion of Earth. The ship is comprised of an elongated dome with a command structure hanging beneath, in a similar vein as a human zeppelin. While landed the Troop Transport rests at ground level, where ramps lead up to the underside, where scores of aliens may load single-file into it.

While naturally frail, the aliens enhance themselves by wearing large bio-mechanical suits that significantly enhance their strength and make them extremely dangerous and aggressive in a physical confrontation. These suits are equipped with large arms and legs, as well as a series of slippery tentacles that are not only effective in combat, but also allow the aliens to take over the minds' of their victims and speak for them. The Queen's version of bio-mechanical suit is also larger and more insectoid. 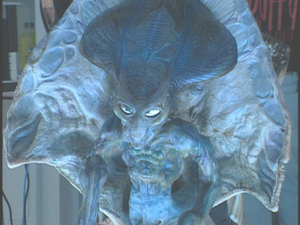 A behind-the-scenes footage of a Harvester using SFX.

The Mothership of the first invasion.

A fleet of Destroyers are dispatched during the first invasion.

Harvester soldiers are loaded onto a Troop Transport during the first invasion.

The second invasion force descends upon Earth. (up-close is a Harvester Mothership).

A Harvester Mothership lands on Earth.

The Harvester Mothership's EMP
Add a photo to this gallery

Retrieved from "https://villains.fandom.com/wiki/Harvesters?oldid=3465458"
Community content is available under CC-BY-SA unless otherwise noted.