Wipe out humanity and restore nature

Hashi is an antagonistic character and one of the six playable ones in the indie fighting game The Black Heart. He is a nature beast that hates humankind and wishes to eradicate it.

He was voiced by Andrés Borghi.

Hashi belongs to an ancient race of wood men who were the main workers that shaped and constructed the Earth. Now they are almost extinguished and live in a secret magical forest in Tierra del Fuego ("Land of Fire" if translated to English) in South Argentina. This race is known for being pacifist, as they not worship violence and learned how to embrace nature, however, Hashi was the only one to be known with a violent behavior and fighting skills, traits that are unknown on his race.

One day, Hashi was finally banished from the forest for his constant hate and violent actions toward humans, as he thinks humans are a menace to the Earth and not the true inheritors of it, as his people believe. He dedicated his days on vandalize human's settlements (and it's believed that even killing them) towards on, until he met again with an old friend of him, Bako, council of the wooden man. He tells Hashi to come with him, as an unknown menace was weakening his race and causing extremely terrifying and negative effects on nature.

When Janos, Prince of the Other World killed his father and ripped his heart, it's power was so strong that caused negative effects on Land of Fire's vegetation. The nature of the magical forest starts turning red and weakening the wood men, they soon start seeing it as dark prophecy. Malen, the leader of Hashi’s race, calls him back from banishment to go to the Chaos between worlds and end the menace that threatens the Earth by killing the being that they believed, stole the King's heart, Final. As a race of peace, the wood men did not train to be fighters. Hashi, believing that peace will not prevail, trained himself throughout the years of his banishment. So, he is the only one of his race with enough strength and warrior instinct to achieve the mission. Bako, who has the ability to teleport Hashi through dimensions, accompanies him on his journey to the Chaos.

When they finally found a crack to The Chaos, Hashi founds a resting Final imbued in the heart's dark power. He quickly recognizes him as the beast he was told about and threatens him to give away the heart. Final, cautious in front of the unknown monsters, tells them to go away to the dimension they came from. Not wanting to surrender, Hashi tells Final they are going to do it the hard way, and they both engage into a fight.

When Final finally loses, Hashi tell hims once more to give away the heart, but Final refuses, answering that it was protecting him from an evil being that was coming to that way to steal the heart, and that it was, in fact, the responsible for the red coloration in their world. Hashi, don't believing him, threatens Final to give it away or he would finish him off. Final decides to use his trump card, and takes advantage on Hashi's beliefs about humans to make him go to his side, and makes a deal to him: Hashi would go and leave him alone, and in exchange, Final would give him a seed imbued in the Heart's power, that, if planted on the Woodmen's mother three, it would sprout deadly vines and vegetation that would entirely cover his world and end with humanity. Hashi quickly agrees, and attempts to take the seed back to our world, but Bako, that believes that their survival depends on not bothering humans, refuses on teleporting him back. Hashi demands Bako on teleporting him or he would kill him in exchange, and Bako, not having other choice, decides to follow Malen's orders.

In the dimensional warp back to our world, Bako teleports Hashi to a pit were he would fall to his death, that was Malen's plan B in the case that Hashi did something that would affect them. Hashi, filled with rage for the betrayal of his own race, insults Bako one last time and crashes into the ground.

Hashi has a really tough, rude, and bad-behaved personality, even with his fellow men. He frequently blames and swears and tends to treats his own friends in a really disgusting manner. However, Hashi is a being that actually cares of his own race, and looks for everything that fill his men's needs. Everything changes when he's against humans, that's when he changes to a really xenophobic, misanthropic, and even murderous being that seems them with enraged eyes and believing they are a parasite that ruins the environment they have been provided. 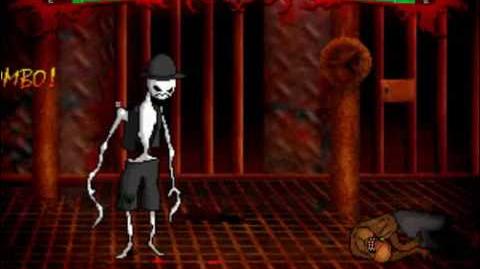 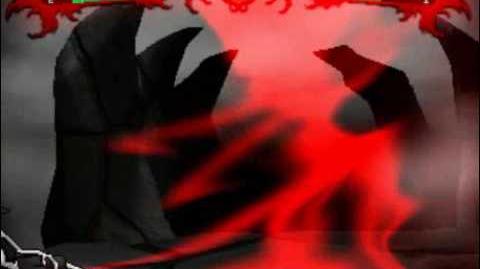 Retrieved from "https://villains.fandom.com/wiki/Hashi?oldid=4034509"
Community content is available under CC-BY-SA unless otherwise noted.