Hastur, also known as the King in Yellow, is one of the many Great Old Ones and Cthulhu Mythos deities, acting as one of the most mysterious of Lovecraftian gods.

First appearing in Ambrose Bierce's Haita the Shepherd, the god has been stated to be Cthulhu's half brother, a fallen angel, the god of shepherds, and the duke of Hell itself. He is also the main villain of Magicka, under the name Assatur, who plotted to destroy Midgård by possessing the powerful magician Grimnír, and trick the orcs into distracting the humans, while he transported incorporeal daemons into Midgård, which were tearing the world apart.

He has also been known to be the spawn of Yog-Sothoth. Hastur's true form shall never be revealed, but there are two main ways that he is constantly imagined. The first one is a shapeless blob of octopi-like appendages, a common trait among Cthulhu related deities (and is also similar to his half-niece Cthylla). The second is a humanoid hidden by a golden cloak with a family of similarly colored tentacles oozing out from under him.

Other than Hastur's debut, he is mentioned in H.P Lovecraft's The Whisperer of Darkness and is used as more of a placeholder name for certain stars in Robert W. Chambers' collection of written stories. Also, in Robert W. Chambers' ghost story The Demoiselle D'Ys, he is treated as the usual supernatural entity, but in The Repairer of Reputations, he is referred to as a location. This could be because a continuity error, a simple coincidence, or they are possibly named after each other.

Hastur has several followers, both human and extraterrestrial. The most notable are presumably the Brotherhood of the Yellow Sign and the dragon-like Byakhee.

Hastur/The King in Yellow has been referenced in countless forms of Media. Some notable are: 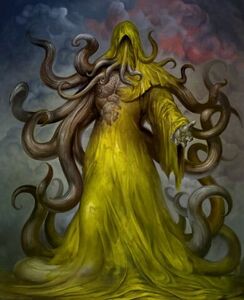 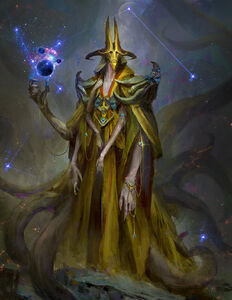 Hastur with celestial bodies in hand. 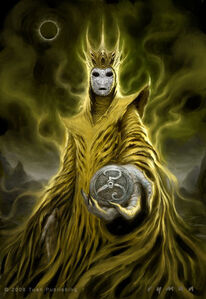 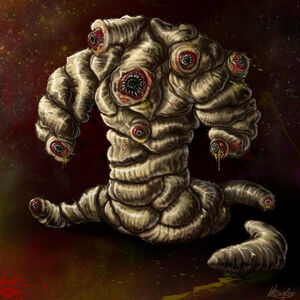 Duke of Hell Hastur, a malicious demon from Good Omens. 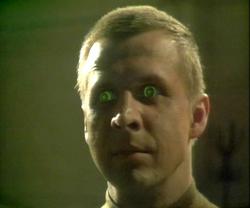 Fenric, Hastur's interpretation in Doctor Who. 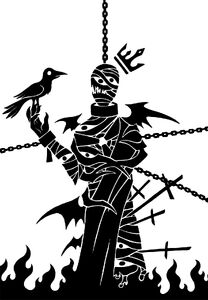 The Hanged King, Hastur's interpretation in the lore of the SCP Foundation.
Add a photo to this gallery

Retrieved from "https://villains.fandom.com/wiki/Hastur_(Lovecraft)?oldid=3734482"
Community content is available under CC-BY-SA unless otherwise noted.