Enigmatic Ghosts
The Hatbox Blast-Ups (unofficial) are a a pair of enigmatic ghost characters that once existed in The Haunted Mansion attraction at Disneyland. They are a pair of ghostly decapitated skull-like heads that haunted the attic, and were most likely tied to the story of the Hatbox Ghost.

The screaming skulls have little to no personalities other than scare devices, quickly levitating out of their hatboxes to scream and screech at guests. However, taking into account the original attic's story, the heads are likely tormented, vengeful spirits that break free from the hatboxes they were contained in. In this sense, they can be considered tragic figures, as they are victims of a killer bride and doomed to endure her presence for all time.

In the early days of the attraction, the Hatbox Ghost was featured in the attic alongside the Bride. During that time, the story of the attic was most likely that the Hatbox Ghost was the groom of the bride, who decapitated him for unknown reasons and hid his head in a hatbox. The Hatbox Blast-Ups were presumably intended to represent her earlier and/or later victims, left as nothing but skeletal heads attempting (and succeeding) to burst from their hatbox prisons and terrify those foolish enough to disturb them, likely as revenge.

However, after the Hatbox Ghost's removal and the Bride being changed to a tragic and more heroic figure, the story of the attic was changed, and the two Hatbox Blast-Ups had little connection to the story of the attraction other than being malevolent spirits attacking and scaring guests. The screaming skulls were later removed altogether in the overhaul in 1995. They did not return, even after the Hatbox Ghost's long-awaited return in 2015.

In Haunted Mansion lore, the Hatbox Blast-Ups rarely appear. However, despite the fact that they were never in the attraction at the same time, the skulls have generally been deemed potential additional victims of Constance Hatchaway, though their inclusion so far is speculation. 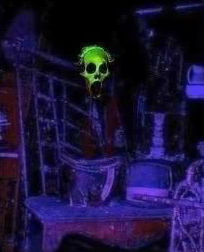 The first Blast-Up that would be seen upon entering the attic, located to the right of the Doom Buggy track.

The second Blast-Up, located on the left of the Doom Buggy track just before the Bride and Hatbox Ghost. 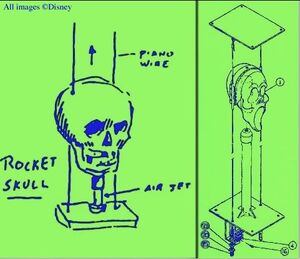 Concept sketches from Yale Gracey, Imagineer and creator of the Haunted Mansion.

Yale Gracy building props. The potential first designs of the Blast-Ups can be seen in the extreme foreground: a skull emerging from a box. 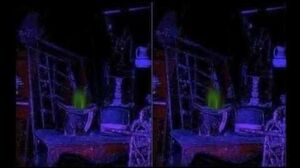