Conquer the world and remake the Nazi regime.

Hate-Monger is a supervillain from Marvel comics in league with HYDRA. He is actually a clone of Adolf Hitler created by Arnim Zola, however over time this clone would develop into a unique villain in his own right and was originally a masked criminal devoted to spreading hatred (hence his name) - however after being reborn by the power of the Cosmic Cubes the Hate-Monger became a living embodiment of hate, made of pure energy and capable of installing hatred in others without the aid of his "H-Rays" (which stood for "Hate-Rays").

Other villains have also taken the name of Hate-Monger such as the Man-Beast, one of Psycho-Man's androids and an energy-vampire that changed his name to Animus.

Another interesting fact is that Hate-Monger's original uniform was very similar in design to the uniform worn by KKK - which was likely intentional.

The first time that the Hitler-clone "Hate-Monger" manifested in the modern era would be when he fought against the Fantastic Four, having been using his H-Rays to incite racial violence and prejudice he would counter the arrival of the Fantasic Four by using said H-Rays on the heroes, causing them to grow hostile to one another and break ties, with the Fantastic Four effectively broken the Hate-Monger continued his plans to create a massive H-Ray weapon by which to bring the downfall of society on a global scale and rule over the ashes of a world where every man, woman and child effectively warred with themselves.

Hate Monger had a variety of abilities based around the motive of hate, most prominent of which were strange mind-altering rays known as "H-Rays", these rays were originally technological in nature but would become a part of his "natural" physiology after he was exposed to the Cosmic Cube. He could also transfer his mind into infinite clone bodies, making him effectively immortal, this trait was lost after merging with a Cosmic Cube.

Even before becoming Hate Monger he had exceptional charisma and a powerful, if unstable, leadership that led the world down the dark path of World War II and all the associated atrocities of that era. 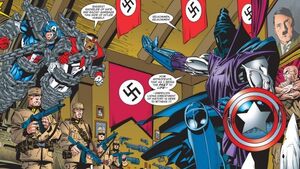 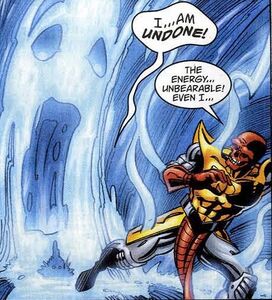