Dishonored: The Knife of Dunwall

Profiting from their criminal enterprise.

The Hatters are a villainous gang first appearing in Dishonored: The Knife of Dunwall, having since appeared in the follow-up games The Brigmore Witches and Dishonored 2.

The Hatters are a violent gang operating in Dunwall, where their hideout and main base is located in an abandoned textile mill in Drapers Ward. Initially founded by Mortimer "The Geezer" Hat, their operations have since been taken over by Hat's nurse William Trimble, since Hat himself is old and unable to lead the gang by himself, being only kept alive by Trimble's care. The Hatters can be recognizes by the signature heads they wear (usually bowlers or tophats).

The Hatters are one of the oldest gangs in Dunwalld, being active in the city since 1829, and are powerfull and feared still. However, clashes with the Bottle Street gang and the Dead Eels gang have led to the gang losing much of their territories and caused a turf war in Drapers Ward, where the Hatters are battling the Dead Eels. The gang manages to gain the upper hand when Nurse Trimble contacts the brutish Edgar Wakefield, the second-in-command of the Eel's leader Lizzie Stride, and convinces them to usurp the position. He also has Wakefield hand over an engine part of the Dead Eels' ship, The Undine, in order to get the textile mill running again.

A group of Hatters has a base in the Black Friar pub in the legal district, from where they plunder abandoned houses in the vicinity. When Talia Timsh - having arrived for a meeting with the assassin Daud - is spotted by the Hatters, some of them corner her in an alley and kill the guard accompanying her. While two of the Hatters head up to a nearby roof in order to look out for intruders, one last Hatter interrogates Talia, believing that she lives nearby in one of the fancy mansions. When Daud appears and openly enters the alley, the two Hatters on the roof will jump down and attack. However, Daud can also silently eliminate the men without being seen by use of his arcane powers and sneaking skills.

Several other Hatters can be found in the Black Friar pub directly behind the alley while a single dead Hatter, who died while trying to steal a gate key from the City Watch, can be found inside one of the abandoned apartments in the area.

In order to reach Brigmore Manor and battle the witch coven located there, Daud intends to use the Dead Eels and their Undine in order to get there. However, since Wakefield's coup, Lizzie Stride languishes in Coldridge Prison and Daud is forced to infiltrate the prison in order to get to her. While there, he can find several members of the Hatters gang in some of the cells and it is revealed that Lizzie had to be moved into a different cell due to the enimosity between the two gangs.

After Daud has saved Lizzie and helped her to overthrow the treasonous Wakefield, he is tasked by getting back the engine coil the Hatter's stole. This forces him to enter the Hatters main hideout in the textile mill, where the Hatters are initially hostile and attack on sight. While traversing Drapers Ward, he can witness a standoff between the Hatters and the Dead Eels, which ends with one of the groups being killed by the others during a brutal battle. Additionally, the entrance to the area is guarded by an arc pylon the Hatters stole, allowing the Hatters to directly control who is entering their textile mill. Daud has to deactivate the pylon in order to reach the door, where a password must be spoken to be allowed to enter the grounds. The password can be obtained from Lizzie Stride, who once got it from Mortimer Hat himself.

When Daud reaches the textile mill, it is revealed that the engine coil is locked away behind a door only Trimble has the combination for. Therefore, Daud confronts Trimble who proposes a trade. He reveals that the Hatters only need the engine coil in the first place because the watermill is no longer working. He reveals that he sent Hatters into the sewers to reach the Water Control Station, but these men never returned. Trimble promises to return the engine coil if Daud gets the water wheel running again. Afterwards, the Hatters are no longer hostile and only attack if provoked. After Daud returns from the sewers, Trimble keeps his promise and gives Daud the combination for the room.

Additionally, Daud can speek with the Geezer - only kept alive by Trimbles machines - who begs Daud to free him from his torment and kill him. Daud can do this by removing the whale oil tanks from the machines, although doing so while seen by Trimble or other Hatters while cause them to turn hostile again. It must be noted though, that the death of the Geezer releases a deadly toxin in the entire building, since Trimble added this as a deterent so that nobody would ever think of killing Hat. Daud can create an antdote in the attic of the textile mill which makes him immune to the toxin. Trimble himself will not die from the toxin, since he regularly consumes the antidote as well.

During Emily Kaldwin's escape from Dunwall after Delilah's coup, two Hatters can be found at the docks of the Tower District who talk about their plans of setting up Black Market shops. When Emily returns months later, some Hatters have taken over several abandoned buildings in the Tower District. 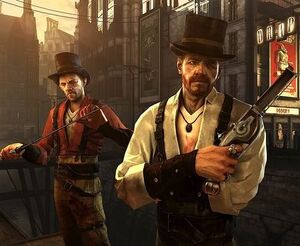 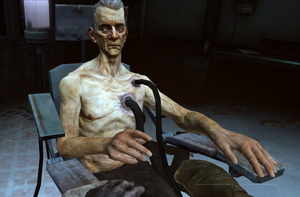 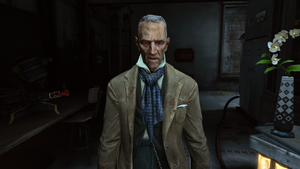 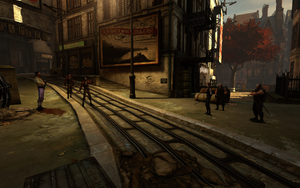 The Hatters fight the Dead Eels 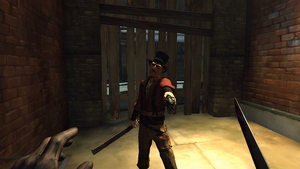 A Hatter fires at Daud 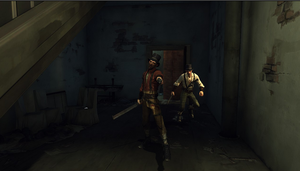 Hatters attack Daud
Add a photo to this gallery

Retrieved from "https://villains.fandom.com/wiki/Hatters_Gang?oldid=3953111"
Community content is available under CC-BY-SA unless otherwise noted.