God of Chaos (in his Mortal Kombat: Armageddon Ending)

Chaotic physiology that enables Havik to freely disengage, dislocate and reattach his limbs at will
Unpredictability
Ability to survive even after his head severed
Snake Kung Fu
Tang Soo Do
Morning Star Club Mace fighting skills

Bringing opposing fighters and forces to battle each other.
Ruling and leading the Chaosrealem.

Spread chaos throughout the realms.
Destroy Hotaru.
Become a god in the Mortal Kombat X comics (failed).
Claim and use the god-like power of Blaze.

He will do anything and help anyone as long as it involves chaos. He is known as the Cleric of Chaos, a title based on the occupation shared by his fellow ChaosRealmers who based their religion around disharmony and ruin.

He is voiced by Paul St. Peter.

Havik first appeared in Mortal Kombat: Deception. In the Chaosrealm, he asks Shujinko to get rid of the Seidan Guardsman patrolling the area where the realm's great water supply is, or at least convert them to his religion of Chaos.

Havik then trained Shujinko the only way he knew how, using Chaos. His archenemy is Hotaru and thinks that Order is a plague. In Seido, the Orderrealm, he formed an alliance with Darrius, and found and revived Kabal in his own image. He also hates the Dragon King, Onaga.

During the final battle, Havik lead the heroes to Onaga's throne room to defeat him. He then vowed to restore the forces of Chaos in Outworld.

Havik resurrected Shao Kahn making sure the Emperor's rule would be a Chaotic one.

Havik arrived in the Netherrealm along with two of Shao Kahn's most powerful Shokans, Kintaro and Sheeva. Along with several demons, the three of them, Chaotically, entered Shinnok's palace. When he confronted Taven and Shinnok, he hoped that they were looking for trouble.

Havik then introduced himself as a Cleric of Chaos and told Taven that Shinnok wouldn't reclaim his Throne. Even though he used all of his Chaotic might, Havik was defeated by Taven. He was unconscious when Taven took out both Sheeva and Kintaro. But it turns out that the Havik that Taven fought was one of Shinnok's apparitions created to test the Edenian demigod's might while the real Havik was never in the Netherrealm.

In Havik's Mortal Kombat: Armageddon ending, he achieves Ultimate Chaos after obtaining the power of Blaze atop the Pyramid of Argus. He twists and distorts the realms to the point that nothings the same as its been.

In the Mortal Kombat X Comics Havik was a main antagonist in which he first appeared in Volume 1, Havik had the power to posses anyone who used the Kamidogu daggers and his goal is to collect 6 Daggers, he shows his power when he takes Forrest Fox and uses him to kill Scorpion, then he takes Sub Zero to kill Scorpion until Scorpion finds Shujinko who owns a dagger himself only to be stopped by Havik in disguise who talks to Scorpion, Havik then rips his face off and attacks Scorpion meanwhile Shujinko attacks Takeda in the room over. Meanwhile Reiko was becoming blood god using 6 daggers at Shang Tsung's island.

Although Havik is unplayable in Mortal Kombat 11, he appears in the ending for The Joker. After the latter contacted Havik through the hourglass, he, along with Mileena and Hsu Hao join up to terrorize Orderrealm.

Havik is briefly mentioned in Mortal Kombat 11: Aftermath, mentioning that he will keep Geras company in Chaosrealm, where Shang Tsung banished Geras. This strangely contradicts his earlier death, perhaps suggesting a revival of Havik by some other figure.

Personifying the title of Cleric of Chaos, Havik freely expresses his intrinsic nature, neither good or evil, he lives only to spread chaos. He is highly revered among his fellow Chaosorealmers and despised all forms of Order (namely his arch nemesis Hotaru and the Realm of Seido).

Havok utilizes a bizarre assortment of techniques than can throw off and devastate opponent's mind and body. His body is warped to the point that he experience joy and pleasure instead of pain and is able to rejuvenate himself by dislocating his own limbs or recover from what should be life ending injuries such as a broken neck and crushed skull.

Because of his unpredictable ways, what may seem to a battle to the death is either a lesson or friendly conversation. Beyond this, his fighting style usually revolves around savagery and hayhem. In the new timeline, Havik displayed some skill in sorcery by corrupting the Blood Magik within the Kamidogu, allowing him to corrupt and possess those cut with one of the daggers, even gods. There doesn't seem to be a limit to who he possesses at a time and from a distance, as he is able to control others while in an entirely different realm.

Havik has a healing factor, which allows him to survive his deadly contortions, such as neck snapping and even reattach severed limbs with little hassle. This ability in conjunction with the Blood Magik, allowing him to survive Scorpion's hellfire coated punches. 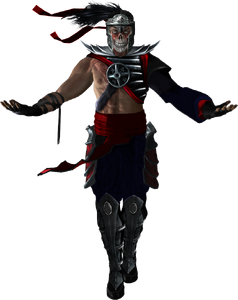 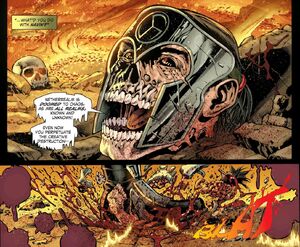