Kill and eat others.

Get revenge on Rango for escaping her grasp (failed).

The Hawk is a major antagonist in Nickelodeon's twenty-third feature film Rango. She is a sadistic and violent predator who enjoys the thrill of the hunt when chasing down prey.

As Rango wanders in the desert, he comes across Rock-Eye, who tells him to hide, as the hawk is approaching. Rango fails to do this, and the hawk spots him and begins chasing him down. Rango manages to get her head caught in a can, but she hears him step on a twig and gives chase. Rango manages to get her to smack into a cactus, and takes the opportunity to hide in a glass bottle as the hawk shakes the can off of her head. When the hawk sees Rango in the bottle, she grabs it and hoists it high into the air, giving an evil grin before dropping him. However, the bottle lands on Rock-Eye, breaking the bottle's fall and revealing him, giving the hawk a new target. Rango and Rock-Eye try to flee, but the hawk grabs Rock-Eye and takes him away to eat.

Later, the hawk comes to the town of Dirt, where Rango is having a duel with Bad Bill. She recognizes Rango and lands behind him, waiting for him to turn around and notice her. As the other townsfolk flee, Rango obliviously walks around gloating until he turns and sees the hawk. He then tries to escape into a toilet, but the hawk claws the building down and corners him. However, the hawk is distracted by another member of the town, and Rango flees. The hawk gives chase across the town, destroying buildings as she tries to get him.

Rango hides in a vending machine, making the hawk angry that she cannot get to him. She pecks at the glass, causing a quarter to fall out of the coin return. The hawk grins at Rango before inserting the quarter and attempting to get him out of the machine, but Rango makes a makeshift rope out of licorice and escapes. The hawk catches up and grabs the end of the candy rope, attempting to pull Rango into her clutches. However, Rango shoots the rope. The bullet bounces off of a horseshoe and the hawk's beak to hit a rope holding up a water tower. The water tower falls, and the hawk is crushed to death beneath its weight.

However, due to the hawk's death, Rattlesnake Jake now had nothing to fear when coming to Dirt. However, Rango recognizes the hawk as Jake's natural predator and later gets help in making a decoy hawk to try and scare Jake away.

The hawk is shown to be a cruel and sadistic predator when hunting, often displaying a mocking and wicked grin when she believes she has her prey cornered. She enjoys the thrill of the hunt, and will often like to scare or play with her victims before eating them, such as when she waits for Rango to notice her and run before attempting to catch him. She enjoys seeing her prey in pain, but will get angry if they constantly allude her and will seek revenge on ones that get away. She appears to be quite intelligent as upon seeing a quarter falling, she quickly understood how the vending machine works and proceed to insert the coin and press on the buttons with her wing.

She is also shown to have a metal plate on her beak, most likely as a fashion statement or form of protection. It also allows her beak to be a much harder and more dangerous weapon.

The hawk attempting to break the glass bottle to get Rango.

The hawk looking for Rango, only to notice he's gone.

The hawk shocked as she watches Rango running away.

The hawk attempting to kill Rango.

The hawk being shocked as she gets shot at by Rango.

The hawk's cry of defeat. 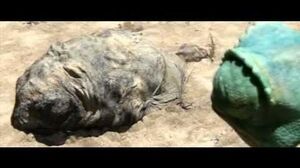 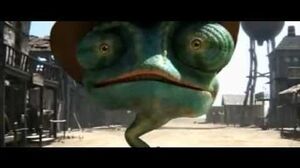